Big Signals from Gold and Silver

After nearly eight years of torment, gold and silver are back.  The global political picture is spinning out of control quickly.  And the precious metals are here to tell us just how quickly.

Before I get to the charts, however, I think it’s important we review everything that happened this week just to get some context.

Last weekend two gruesome murder sprees were committed in El Paso, Texas and Dayton, Ohio.  Both shooters apparently radicalized by the current political climate. The usual suspects used these events to call for gun control, pre-crime prevention straight out of a Philip K. Dick novel while blaming them on the tyranny of white people and Donald Trump’s racism.

Then on Monday morning to the news India revoked Article 370 of their constitution, reorganizing Kashmir & Jammu and putting the entire area on a lockdown so complete many there don’t know what happened.

Protests in Hong Kong continued into their third week as the U.S. is caught openly working with protest organizers and castigates by China.

Later that same day Donald Trump finally fulfills a Republican dream of labeling China a ‘currency manipulator’ because investors properly responded to his installing tariffs on the rest of China’s imports to the U.S.
Markets flopped all week.  On by Wednesday morning, oil had broken below its near-term term to break its bull market run.

By Wednesday Italian Interior Minister and leader of Lega, Matteo Salvini called for the end of the coalition government, just thirteen months old, with Five Star Movement.  The ramifications of this are immense.

The Italian Deep State whom Salvini is fighting at every turn, along with the European Union, has control over the government which he supposedly leads.  For now the Troika of Technocrats installed above Salvini in Rome will drag out calling new elections because as bad as the current government is, with Italian polls showing Salvini likely to win an outright majority in Parliament, this is as good as it gets for them.

For the capital markets the situation is as follows:

As long as it looks like Salvini will not get his new election the markets will err on the side of stability. The euro will continue to levitate just above the breakdown line at $1.11 despite a rising dollar and yen and deteriorating financial and economic conditions.
But once the reality sets in, only then will the pressure mount to the point of no return. The same is true of Boris Johnson’s fronting to the world he’s prepared for a no-deal Brexit. Markets want to believe that there’s a compromise because “cooler heads” usually prevail.
But what happens when they don’t?

The Italian debt markets are a complete fantasy. They have been for years but this year they went from urban legend to full-blown fairy tale.
The closer we get to October the higher the odds of a political spasm across the EU.

All of this leads back to a post I wrote speculating that entrenched interests blew up decades-old arrangements because there are too many threats mounting geopolitically for the tastes of The Davos Crowd.

The more I think about it the more Monday was some form of geopolitical coup attempt. The multiple annoyances coming from the Trump administration are one thing. But doing so at the same time the Indian government took the dramatic step to reorganize Kashmir/Jammu using the pretext of recent terrorism and the ongoing riots in Hong Kong to foment a color revolution there is irresponsible.

And that has the fingerprints of someone else.

We now know who.

The same people who killed Jeffrey Epstein in prison.  They are all the same folks.  And it doesn’t matter who any of us, personally, think is behind all of this because the truth is, we’re all partially right.

Who killed Jeffrey Epstein will be foisted off as some form of karmic justice, but it smells too bad this time.  And the fallout from all of these events points to one thing and one thing only, in the grand scheme of things.
Chaos.

Chaos is messy.  Killing Epstein this brazenly is a sign of desperation.  The markets will wake up tomorrow not safe in the knowledge that the political elite are protected from what this man knew but scared at the implications for long-term political and societal collapse.

And that’s why gold and silver put in weeks to remember.  And why what happened this week is showing up on longer-term price charts as something very different.

Let’s start with gold and a look at the quarterly data.

The post-Brexit vote high of $1375 has defined the gold market for more than three years.  But it is even more significant than that.  That region between $1375 and $1434 cast a pall over the market going back to the breakdown in 2013.

A formation this big has built up a tremendous amount of energy.  It’s more than enough to eclipse the all-time high of $1911 and go beyond that.  Gold is the peoples’ hedge against government run amok.

Every day more people pull back from this show and ask themselves, “What should I do now?” That’s part of where this energy comes from.  It’s been building for years.

And enough people are saying to them the same thing, “Buy gold.”  And, slowly the worm turns.  Slowly when I tell people this they don’t look at my like I’m a lunatic.

Gold cleared a major hurdle in June.  It was a big deal.  But to see it immediately follow through into August pushing above $1500 is a signal things are accelerating.

Which brings me to silver.  Silver has been lagging behind gold and it’s been used by skeptics to say that gold’s bull should be questioned.
This week silver put those issues to bed.  While still not out of its bear market, the explosive move in silver is enough to make even the most jaded observer take notice. 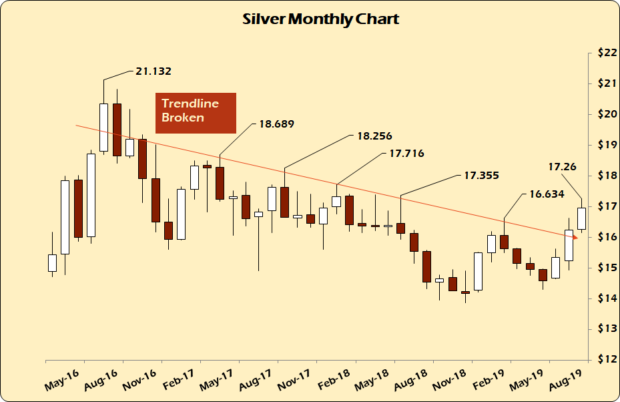 The big three-year downtrend line in silver was broken last week with the move back to the $16.60 area.  But it was this week’s move above that near-term resistance point to challenge the May 2018 high at $17.34 that is the signal.

From here I don’t expect the fireworks to continue.  Consolidation of these gains is likely if ‘cooler heads prevail’ and the news cycle slows own.  But what is clear is that sentiment in these crucial markets has changed and the central banks’ jawboning their way through the political minefields no longer has the same effect it used to.

Chaos, once it’s unleashed, is impossible to control.

When pols talk and no one listens what do you think happens next?

Epstein’s DeathWhat We Know About How Epstein Died