The Benefits of a Profoundly Shattering Recession

Does anyone really think The Everything Bubble can just keep inflating forever?

What do I mean by a profoundly shattering recession? I mean, a systemic, crushing recession that can’t be reversed with central bank magic, a recession that only deepens with time. The last real recession was roughly two generations ago in 1981; younger generations have no experience of a profound recession, and perhaps older folks have forgotten the shock, angst and bitterness.

A profoundly shattering recession leaves tremendous damage and pain in its wake. Millions of people who reckoned their position was secure get laid off, businesses that looked solid melt into air, large corporations flip from hiring thousands to firing thousands, and everyone on the edge of insolvency gets a hard push over the cliff.

Profoundly shattering recessions feed on themselves in a self-reinforcing dynamic: the first domino could be a supply-shock, or a decline in demand due to credit exhaustion. Since businesses have cut everything to the bone in the past decade, there are no buffers left: layoffs begin immediately, and those layoffs further reduce demand as households have to tighten their belts to survive as even those who escape the first round of layoffs find bonuses and overtime have been slashed. 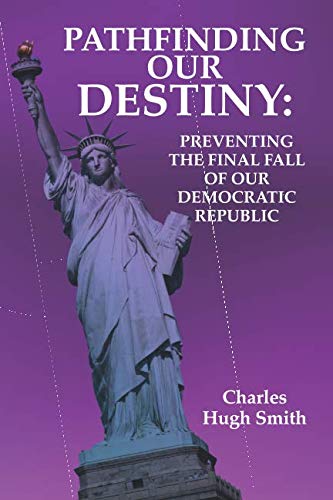 Since the problem isn’t high interest rates, central banks reducing rates or pushing them into negative territory only reveals their impotence. If negative interest rates boosted the real economy, Europe and Japan would be experiencing rapid expansion instead of stagnation.

Layoffs, the failure of central banks and soaring fiscal deficits trigger a drop in consumer and investor sentiment which feeds back into declining sales and profits, which then trigger more layoffs as businesses must cut expenses as revenues crater.

Clearly, there is no benefit to households or enterprises to this self-reinforcing recession. The benefits are structural: financialization, the parasite that has eaten our economy from the inside, will collapse along with the mountains of debt that fueled it.

Zombie corporations and local governments that have been insolvent in all but name will finally go bankrupt, clearing the system of their dead weight. Economies supporting zombie entities are sacrificing their capital to keep insiders afloat, which leaves less capital to invest in increasing productivity, which is the only way to increase broad-based wealth.

The Everything Bubble will finally pop, stripping the system of phantom speculative wealth and fictitious capital. Price discovery will once again be possible, as all the central bank-inflated bubbles will deflate and real demand and supply will set the price of assets.

Once central banks have been revealed as powerless, the quasi-religious belief in their omnipotence will dissipate, and people will finally start dealing with the Gilded Age excesses of the past 20 years. Common sense limits on financial predation and trickery will gather support, and tricks like corporate buybacks will be outlawed or restricted.

Previous article by Charles Hugh Smith: Is the US Becoming a Third World Nation?