Distinguished Professor Emeritus of Economics at Ohio University Richard Vedder’s new book, “Restoring the Promise,” published by the Independent Institute based in Oakland, California, is about the crisis in higher education. He summarizes the three major problems faced by America’s colleges and universities. First, our universities “are vastly too expensive, often costing twice as much per student compared with institutions in other industrialized democracies.” Second, though there are some important exceptions, students “on average are learning relatively little, spend little time in academic preparation and in some disciplines are indoctrinated by highly subjective ideology.” Third, “there is a mismatch between student occupational expectations after graduation and labor market realities.” College graduates often find themselves employed as baristas, retail clerks and taxi drivers.

The extraordinary high college cost not only saddles students with debt, it causes them to defer activities such as getting married and starting a family, buying a home and saving for retirement. Research done by the New York Federal Reserve Banks and the National Bureau of Economic Research shows that each dollar of federal aid to college leads to a tuition increase of 60 cents. 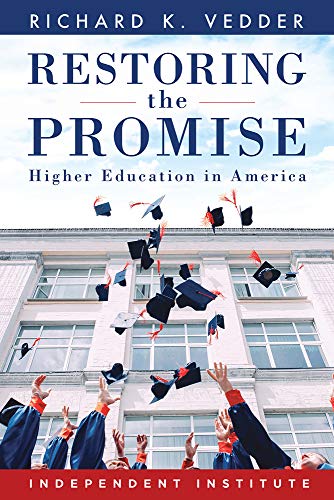 For the high cost of college, what do students learn? A seminal study, “Academically Adrift,” by Richard Arum and Josipa Roksa, after surveying 2,300 students at various colleges, argues that very little improvement in critical reasoning skills occurs in college. Adult literacy is falling among college graduates. Large proportions of college graduates do not know simple facts, such as the half-century in which the Civil War occurred. There are some exceptions to this academic incompetency, most notably in technical areas such as engineering, nursing, architecture and accounting, where colleges teach vocationally useful material. Vedder says that student ineptitude is not surprising since they spend little time in classrooms and studying. It’s even less surprising when one considers student high school preparation. According to 2010 and 2013 NAEP test scores, only 37% of 12th-graders were proficient in reading, 25% in math, 12% in history, 20% in geography and 24% in civics.

What happens when many of these students graduate saddled with debt? The Federal Reserve Bank of New York, in an October 2018 report, finds that many students are underemployed, filling jobs that can be done with a high school education. More than one-third of currently working college graduates are in jobs that do not require a degree, such as flight attendants, janitors and salesmen. In addition to this kind of resource misallocation, 40% or more college students fail to graduate in six years. It is not unreasonable to ask whether college attendance was a wise use of these students’ time and the resources of their parents and taxpayers.

Vedder has several important ideas for higher education reform. First, we should put an end to the university monopoly on certifying educational and vocational competency. Non-college organizations could package academic courses and award degrees based upon external examinations.

Regarding financial aid, colleges should be forced to share in covering loan defaults, namely they need to have some skin in the game. More importantly, Vedder says that we should end or revise the federal student aid program.

Vedder ends “Restoring the Promise” with a number of proposals with which I agree:

—College administrative staff often exceeds the teaching staff. Vedder says, “I doubt there is a major campus in America where you couldn’t eliminate very conservatively 10 percent of the administrative payroll (in dollar terms) without materially impacting academic performance.”

—Reevaluate academic tenure. Tenure is an employment benefit that has costs, and faculty members should be forced to make tradeoffs between it and other forms of university compensation.

—Colleges of education, with their overall poor academic quality, are an embarrassment on most campuses and should be eliminated.

—End speech codes on college campuses by using the University of Chicago Principles on free speech.

—Require a core curriculum that incorporates civic and cultural literacy.

—The most important measure of academic reforms is to make university governing boards independent and meaningful. In my opinion, most academic governing boards are little more than yes men for the president and provost.