The Most Significant Event of the European Enlightenment

This Gulf of Fire: The Great Lisbon Earthquake, or Apocalypse in the Age of Science and Reason, by Mark Molesky

Molesky spends time on the pre-earthquake history of Portugal and significant detail on the disasters that came with the earthquake.  I offered an overview of this previously, so will only touch on a couple of additional points now: Portugal was as Catholic as Catholic could be – even after the Reformation; Portugal also had episodes of being one of the most widespread and wealthiest empires in the world.

My focus here is on the aftershocks – not physical, but philosophic and religious.

God, said to be omniscient and merciful, showed himself to be a very poor sort of father.  So writes Bahngrell Brown when considering the reaction of Johann Wolfgang von Goethe, who was but six years old at the time of the quake. 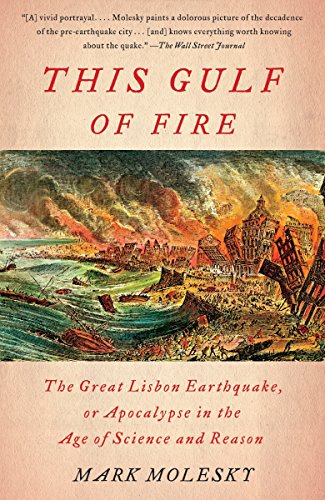 Everywhere there was significant disagreement and debate on the disaster – within five years, hundreds of books, articles, etc., were published, all attempting to answer the question: who, or what, was responsible?  Was it God or was it nature?  Even the question reflected change.

The ensuing debate was arguably the most significant of the European Enlightenment.

…how could a just and all-powerful God have sanctioned the deaths of so many innocent people?

Prior to this earthquake, optimism was blossoming everywhere in the decades of peace that followed the wars of religion – which were actually wars of state-creation.  Gottfried Wilhelm von Leibniz argued in 1710 that an “infinitely benevolent Deity had created the universe with the greatest possible excess of good over evil.”  This view would begin to change.

Voltaire would write of the disaster.  In Switzerland and in exile, away from Louis XV and the guards of the Bastille, he was living by this time a somewhat sedentary (at least by his former standards) life.  By this time in Europe’s evolution, dogma and superstition were well replaced by science and reason – long a central tenet of Voltaire’s work.

The news hit Voltaire like a thunderbolt.  “Nature is very cruel. …What a wretched gamble is the game of human life!”

Science and reason still left room for God, but only a god as described by Leibniz: “infinitely benevolent,” one that created a “universe with the greatest possible excess of good over evil.”  Yes, evil existed, but it was insignificant when compared to the “flawless totality of his handiwork.”

A world that was believed to be so ordered – a perfect creation of God – now seemed capricious and cruel.  The earthquake called into question “this happy progress toward Eden.”  What would this mean about “God”?

“Would the entire universe have been worse without this hellish abyss, without swallowing up Lisbon?  Could not [God] plunge us into this wretched world without placing flaming volcanoes beneath our feet?”

Voltaire would offer a poem, one of despair.  His closing lines:

Will ye reply “You do but illustrate
The iron laws that chain the will of God?”
Say ye, o’er that yet quivering mass of flesh
“God is avenged: the wage of sin is death?”

Rousseau would react to Voltaire’s characterization of a world overflowing with misery and suffering: “You do not want us, Monsieur, to read your poem as denying Providence.”  Rousseau would argue that much of the world’s unhappiness is caused by man.  He even went as far to say that some who were crushed were better off dead!

Kant would work to reconcile the earthquake with Providence, seeing it a result of the same subterranean fires that give us hot springs and steam baths.  The horrors of Lisbon could have been averted had the Portuguese properly prepared for such an event.

Over time, the earthquake would force Kant to alter his thinking.  Hitherto, his works were filled with speculative reference to the Divine.  After Lisbon, he began to embrace a more empirical approach to knowledge and the universe.

Man must not blame providence; he must recognize that every single event was – in every single respect – produced by himself.

The theories behind the causes of earthquakes were equally challenged – as noted by Kant to include subterranean fires.  Others believed there were exploding deposits of subterranean sulfur or electricity connected by underground caverns.

Yet most Spanish scholars dismissed the popular notion that earthquakes were some form of divine punishment.  Some of the more accurate theories of the time were offered by scholars within the Church.

Ultimately, the earthquake brought to the fore both how far ideas of the Enlightenment had penetrated society and how deep religious conviction about God’s role in daily life still held sway.

God and God’s role in the world; random chance and capricious events.  What did the earthquake signify?  What did it destroy from the philosophic and Christian past?  What would replace these?

It was certainly a confused and confusing time for the intellectuals and elite of Europe, perhaps best summarized by Edmond-Jean Barbier:

Embarrassing for the professors of physics
And humiliating for the theologians.

This embarrassment and humiliation still had to be worked out.  This process would begin in the reign of terror.  Not the one that you are thinking of.