In the age of the Social Justice Warrior, it can be hard to know which demographic groups it’s OK to make fun of and which ones it’s not. Fortunately, we’ve got media giants to give us some clues.

Cartoonist Tim Campbell, with the Washington Post News Service & Syndicate, did just that last month, with his editorial cartoon depicting a sick little girl covered in spots, clinging to an IV drip. The title read: “Children of Anti-Vaxxers are Easy to Spot.”

When did it become fashionable to make fun of sick children? When the companies that manufacture vaccines, and also spend billions of dollars each year on advertising, decided it was time to start demonizing anyone who didn’t use enough of their products. (Products, by the way, for which these manufacturers are not held liable, should those who use them come to any harm.)

If you’ve been doing things like reading newspapers or watching news on TV, you know that it is perfectly acceptable to demonize those who choose not to vaccinate their children (the question of whether or not it is OK to demonize adults who are not fully vaccinated is still an open one.)

This is because we know that these people are putting everyone else’s children at risk, based on anti-science ignorance and information gathered only from conspiracy-theory websites and TV talk shows, and that vaccines can’t possibly be dangerous in any way, because a doctor in the UK once lost his license for claiming they cause autism.

Not a word of the above paragraph is true. But it’s understandable if you think it is. There has been a massive media campaign to propagate the above narrative, with publications and broadcasters repeating the same (mostly false) talking points, as if each of them has been handed the same identical script.

So it should come as no surprise that cartoonists have gotten in on the game. But when Tim Campbell posted his latest effort on FaceBook, he included a comment:

“Not a fan of people telling me how to raise my kids, but c’mon folks. I don’t understand why anyone wouldn’t get their kids vaccinated.”

If you don’t know many people who don’t vaccinate, then you may not be aware of this, but if you spend any time at all around those who choose not to vaccinate, or who vaccinate on a delayed or modified schedule, then you most certainly do know this: Most “anti-vaxxers” are in fact “ex-vaxxers.”

Spend some time on some of the “anti-vaccine” groups on social media. Stop by a rally protesting one of the many proposed vaccine mandate bills. Find a screening of the documentary “Vaxxed” to attend. Here’s what you will find: The vast majority of the people the media refer to as “anti-vaxxers” are in fact parents who did vaccinate their children – often in full accordance with the CDC guidelines – and suffered terrible results.

So when some of these parents saw Campbell’s cartoon, and saw his comment pleading ignorance as to why anyone would choose not to vaccinate, they decided to tell him why.

Here are some of those comments: 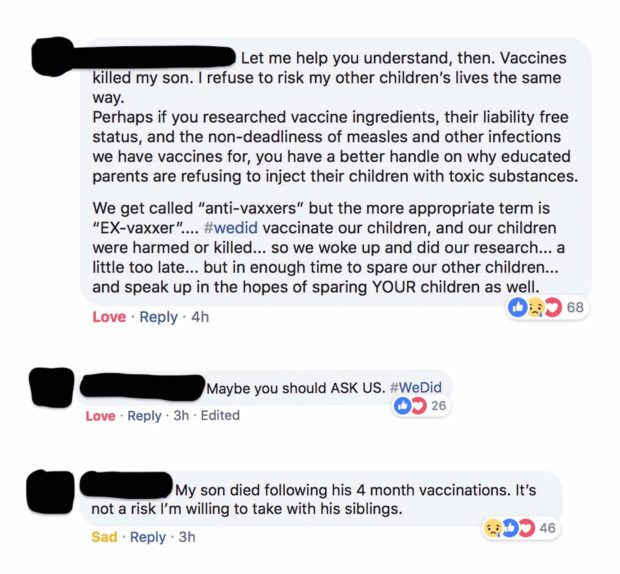 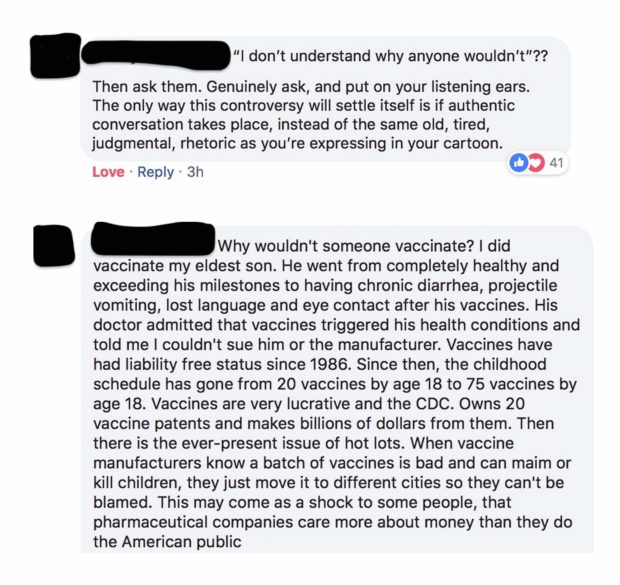 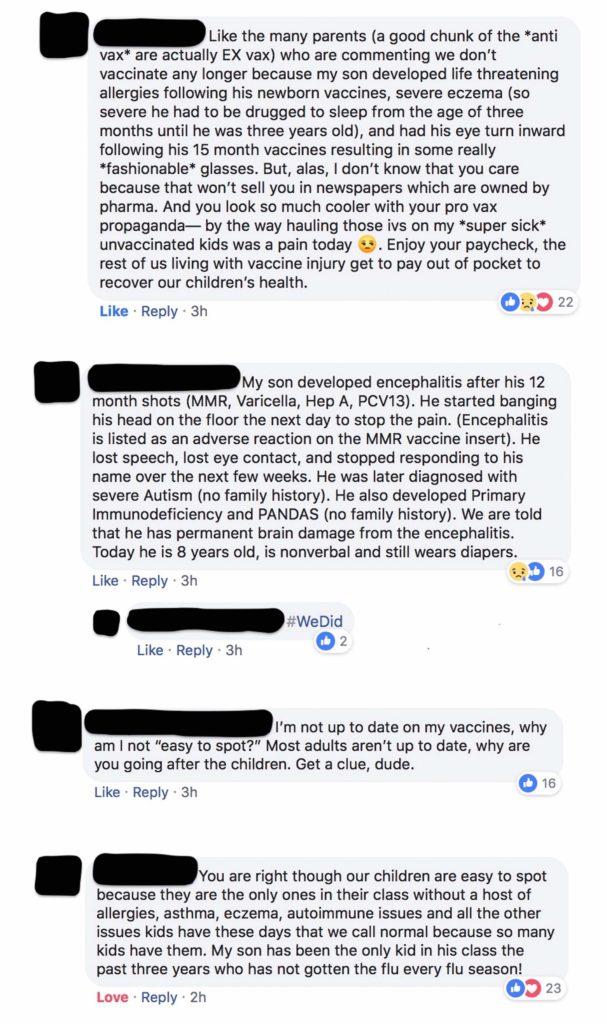 The last time I checked, there were 2.2 thousand comments on the post on Campbell’s FaceBook page. A few were supportive of his attack on “anti-vaxxers”, but the overwhelming majority were like the ones above: Parents attempting to educate him as to why they do not vaccinate their children.

I wrote to Campbell multiple times, both in the comments on his post, and in private messages, asking him to comment on the response his post had generated. Not only did he never respond to my requests, I never saw him reply to a single one of the parents who had commented on his post – parents answering the very question he had posed. It’s possible I missed it, among the thousands of comments. But I can’t help thinking he was never really interested in the answer.

God, Not the Russians, Elected TrumpThere Are Still Democrats Praying