The so-called Green New Deal that was recently posted as a congressional Resolution and endorsed by many high-profile Democrats is essentially a twenty-first century version of the 1888 utopian novel, Looking Backward, by the Marxist-inspired writer Edward Bellamy.  The main character of the novel, one Julian West, falls asleep for 113 years and awakes in the year 2000 delighting in the fact that America had been turned into a socialist utopia.  A major theme of the novel is that all the evils of society can be eradicated by more-or-less totalitarian government controls, mandates, and regulations.  That is also the theme of the Green New Deal.

In Bellamy’s utopia private property is abolished and all industry is nationalized.  Government guarantees “jobs for everyone,” as does the Green New Deal.  Education is “free” (another Green New Deal promise) and everyone is paid the same by the government, the sole employer.  Special efforts are made to assure that men and women are all paid the same.  This is another key point of the Green New Deal.  Everyone retired at age 45 with a good taxpayer-funded pension.

Numerous Edward Bellamy Societies sprung up, established by socialist intellectuals of the day such as John Dewey, who founded the Edward Bellamy Society of New York. Looking Backward also spawned numerous small socialist communes, all of which collapsed in failure – a warning sign of what would become of twentieth-century socialism everywhere. 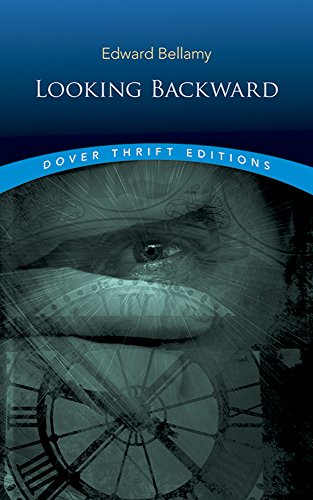 Bellamy did not want to use the word “socialism” to describe his scheme, for most Americans considered it to be dangerous, destructive, and un-American.  They were of course right.  Ever since then the socialist Left has continued to attempt to bamboozle the public with euphemisms for its socialist schemes like “liberalism,” “progressivism,” “economic democracy,” “social justice,” “liberation theology,” “industrial policy,” “Medicare for All,” and now, “The Green New Deal.”  But green socialism is still socialism.

The Green New Deal is a bundle of absurdities founded on a fallacy.  The fallacy is that the original New Deal saved America from the Great Depression.  It did not.  In 1929 the U.S. unemployment rate was 3.2% and skyrocketed to 24.9% by 1933.  But by 1938, after five years of the New Deal, the unemployment rate was still 19% and was stuck at 14.6% in 1940 on the eve of World War II.  The Great Depression did not end until the war was over, the military was demobilized, and the federal budget was cut by about two-thirds from 1945 to 1948.  The year 1946 was the most vigorous year of private-sector economic growth in all of American history, with private consumption and investment spending increasing by 30%.  No other year has ever come close.

That the New Deal not only did not end the Great Depression but made it more severe and longer-lasting has become the accepted wisdom of the economics profession.  In a 2004 article in the prestigious American Economic Review economists Harold Cole and Lee Ohanian concluded that “New Deal policies did not lift the economy out of the Depression . . . the abandonment of these policies coincided with the strong recovery of the 1940s” (emphasis added).

The Green New Deal is even more ambitious – and potentially far more economically destructive – than FDR’s New Deal and is even more utopian than Edward Bellamy’s novel.  It calls for a fifteen-member congressional committee to centrally plan most of the U.S. economy.  It calls it a “Ten-Year Plan,” reminiscent of the old Soviet “Five-Year Plans.”  As with Soviet socialism, it presumes that a small committee of politicians can “plan” the entire economy better than the millions of workers, business people, investors, consumers, and all other market participants can.  This was called “the fatal conceit” of socialism by Nobel laureate economist F. A. Hayek, and is a key reason for the worldwide failures of socialism, a failure that is on vivid display today in “democratic socialist” Venezuela.

Congresswoman Sandy Ocasio (as she is known to those with whom she grew up and went to school with in affluent Westchester County, New York), the most outspoken champion of the Green New Deal, can be thought of as a modern-day Julian West. Upon waking from a 29-year slumber she envisions a green utopia that would include a government rebuilding of the entire infrastructure of the U.S.; the elimination of all fossil fuels, cars, and airplanes; the refitting of all houses and other buildings in the country to her liking; “rebuilding” of all of manufacturing and agriculture by government bureaucrats; government mandates that all jobs be “high-paying union jobs”; government-mandated “family-sustaining wages”; mandatory paid vacations; enforcement of “wage and hour standards”; taxpayer-funded, socialized health care, housing, and “economic security”; government guarantee of clean water, air, and access to nature”; and the payment of salaries of those who are “unwilling to work.”  And as she says, this is just the beginning.  The Green New Deal is The Road to Serfdom on steroids and a recipe for totalitarian socialism.