Jussie Smollett’s Hoax and the Pseudo-Religion of Blackism

Jussie Smollett, a black and gay actor who claimed to have been assaulted—in Chicago during one of the coldest nights in the city’s history—by a couple of MAGA hat-wearing white, racist homophobes has now been exposed by the Chicago Police Department for the fraud that some of us knew he was from the moment that he made his outlandish charge.

It’s no wonder that Smollett, having witnessed all of his life the awesome political and cultural power wielded on behalf of blacks by the Racism-Industrial-Complex (RIC), would be eager to cash in on his melanin by making himself into a victim.  There is another question, though, that deserves probing:

How could Smollett have thought that there was anything so much as remotely plausible about his account of this fake attack?  How could he not have known that millions and millions of Americans would see straight through this for the nonsense that it is?

The answer can be given in one word: Blackism.

The Racism-Industrial-Complex couldn’t function if not for the ideology of Blackism, the pseudo-religion that provides RIC with its theoretical justification.

Most black Americans, and certainly the vast majority of black American celebrities and public figures, are proponents of the ideology of Blackism.

But what is Blackism? Being that it is an ideology, Blackism, like all ideologies, is the simplification, the gross oversimplification, of a more complex cultural tradition.  If Blackism can be said to be a pseudo-religion, then it is a form of orthodoxy, not orthopraxy, for its focus is on a set of beliefs.  Blackism is designed for anyone and everyone who is biologically black—however culturally illiterate they may be with respect to the black experience.

Blackism consists of what we can refer to as its Five-Fold Path, five doctrines that all Blackists are required to affirm.

(1)History is ultimately reducible to a perpetual conflict between racial classes.  More exactly, history is comprised of endless contests over power between the White Oppressor and Oppressed Peoples of Color, with blacks constituting the Uber-Oppressed.

The Blackist is quite provincial, though, for his focus is limited mostly to the oppression of blacks in America.

(2)”White Racism” or “White Supremacy” remains, in the present day, omnipresent. As such it accounts, at least theoretically, for all of the problems plaguing blacks.

(3)Because White Racism is the gravest and most ubiquitous of evils, it is a demonic-like force in the fight against which every conceivable measure, however otherwise objectionable, and even reprehensible, is justified.

White Racism must be fought “by whichever means necessary.”

(4)The fight against White Racism demands a government potentially unlimited in its scope and power.

(5)Racial authenticity is the Holy Grail for many blacks, particularly those blacks with little to no familiarity with black culture. By affirming its Five-Fold Path, Blackism guarantees its proponents instant racial authenticity!

Blackism, not unlike any other religion, relies upon its own mythologies.  Some variation or other of Alex Haley’s Roots is the myth at the core of Blackism’s central narrative.  According to this tale, blacks enjoyed an Eden-like paradise in Africa before the Devil, in the guise of the White Man, spoiled the Garden that was this ideal African condition by exploiting, subjugating, and enslaving the continent’s black inhabitants.  The latter have ever since been forced to endure the Desert Wilderness that is America, a spiritually and morally barren wasteland throughout which black Americans will wander until they can be delivered unto the Promised Land of racial awareness, until their lost racial identity is restored.

Blackism has its prophets.  These are almost always middle-class and upper-class blacks, usually black celebrities, whether in Hollywood, politics, academia, or sports.  But if Blackism can be said to have a High-Priest, its own “seal” of its prophetic lineage, so to speak, it would have to be Malcolm X.

Malcolm X, raised and educated as he was around mostly white children, needed Blackism as much as he helped to shape it. Malcolm would frequently appeal to what he called “the authority of history” while charging whites for having “stole[n] our fathers and mothers from their culture of silk and satins and brought them to this land in the belly of a ship [.]” White are “blue-eyed devils” who, by way of “conquering, killing, exploiting, pillaging, raping, bullying,” and “beating,” marched “through history,” “waving the banner of Christianity” in one hand and “the sword and the flintlock” in the other. 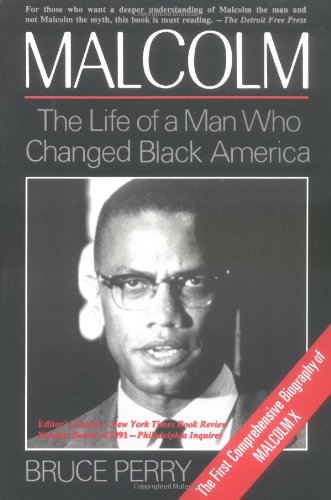 Malcolm insisted that the black leaders and popular heroes of his day weren’t authentically black. According to Bruce Perry, an admirer of Malcolm’s who authored what remains the most honest and fair biography of the man to date—Malcolm: The Life of a Man Who Changed Black America—Malcolm “characterized Booker T. Washington as a ‘white man’s nigger’” while blasting “the NAACP as a ‘black body with a white head.”  Nor did Malcolm refrain from denigrating Jackie Robinson and Joe Louis, men who he had once lionized: Both were “stooges” for whites.

Martin Luther King, Jr. Malcolm said was a “chump, not a champ.” King, along with Roy Wilkins, were “modern house Negroes” and “Toms.” Moreover, all proponents of racial integration were “Quislings” and “Toms.”

Black liberation—black racial authenticity—required a purging of the White Supremacy that had poisoned the minds of most black Americans.  And this purging would have to be had “by any means necessary.”

Malcolm X’s mind epitomizes Blackism. It’s marked by: a racialized conception of history, one that neatly bifurcates history into White Oppressors and Oppressed Peoples of Color; a conception of a world within which the aspirations of blacks are thwarted at every turn by omnipresent White Racism; and the imperative to defeat this most evil and ubiquitous of forces by hook or by crook, regardless of the costs.

Malcolm as well embodies in his person Blackism’s final tenet, the principle that only by endorsing the ideology’s other tenets can one achieve authentic blackness!

The point here, then, is that Jusse Smollett, given his commitment to Blackism, lives within a world where blacks are ruthlessly victimized by whites. It is a fictional world, of course, a “possible world” bearing no affinities whatsoever to the actual world that is 21st century America.  Whether Smollett and his fellow Blackists know that their worldview is a lie is questionable.  Two things, however, seem to be certain.

First, recognizing, as they undoubtedly do, that Blackism heaps no small share of psychic, social, and professional benefits upon its adherents, they have at the very least tried to convince themselves that Blackism’s vision corresponds to reality.  The Blackist is either profoundly self-delusional or dishonest.

Second, insofar as he accepts the tenets of Blackism, the Blackist holds that he has a mandate to deceive if it’s necessary to advance his ideology.

Bearing in mind that Jusse Smollett is a Blackist, his readiness to lie about having been victimized by white racists becomes more understandable.

And as long as Blackism prevails, we can all be sure that race hoaxes will proliferate.