On Friday Roger Stone, a political consultant who in 2016 publicly supported the Trump campaign, was arrested on criminal charges filed by special counsel Robert Mueller. He has since been released on bail. Stone is indicted (pdf) in five cases for making false statements, one attempt of influencing a witness and an obstruction of a proceeding.

Since May 2017 the former FBI chief Mueller investigates an alleged collusion between Trump, his campaign and something Russian with regards to the 2016 election. No evidence has been produced so far that substantiate any such collusion. The people who fanatically claim that there must have been such a connection are now disappointed. The long awaited Stone indictment was one of their last straws. But there is absolutely nothing in it that hints at any collusion.

All these alleged crimes were committed in relation to an appearance of Stone before a House Permanent Select Committee on Intelligence (HPSCI) investigation.

During the 2016 election Stone publicly claimed that he was in direct communication with Wikileaks and its editor Julian Assange. Steve Bannon, then part of the Trump campaign, asked Stone to ask Wikileaks at what time it would release new batches of emails that had been obtained from the Democratic National Committee. The Trump campaign was naturally interested in using these releases to attack the competing candidate Hillary Clinton.

Wikileaks and Assange denied that they had any relations or communications with Roger Stone. It later turned out that Stone had two contact persons, the New Yorker comedian Randy Credico and the conservative writer Jerome Corsi, who he MIGHT have had some contact or insight into Wikileaks. The indictment says nothing about their relations to Wikileaks.

During his appearance in front of the HPSCI Stone misremembered, contradicted or lied about several details related to his earlier false claim. He also asked Randy Credico to lie to the committee. Those are the only issues the indictment is about. It is about the lies of a notorious liar which became process crimes when he repeated them during an investigation. Stone himself denies emphatically that he committed any crime and promises to defend himself in court.

Nowhere does the indictment say that this has anything to do with the Trump campaign, Russia, Wikileaks or the not existing relations between them.

But some media will not tell you that. The New York Times falsely headlines:

The special counsel, Robert S. Mueller III, revealed on Friday the most direct link yet between parallel efforts by the Trump campaign and WikiLeaks to damage Hillary Clinton during the 2016 election using Democratic Party material stolen by Russians. 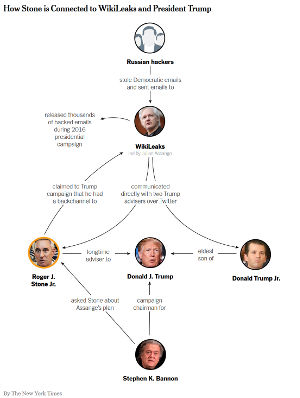 There follow 28 paragraphs about the arrest and others issues, five pictures and the above graphic, but no explanation of the supposed link which, according to the indictment, Stone claimed to have but which never existed.

Stone claimed to have contact with Wikileaks. Bannon asked him to ask Wikileaks a questions. Stone had no relation with Wikileaks. He responded with second hand rumors and publicly available information. End of the story.

Mueller found no connection between the Trump campaign and anything Russia to influence the election. He indicted some people of issues unrelated to the elections. Others committed process crimes by lying to the investigation. He also indicted some Russians for money laundering and hacking. But those cases are quite dubious and will anyway never come in front of a court.

Speaker of the House Nancy Pelosi attempts to divert from this disappointing outcome of the Mueller investigation. The Russian influence turned out be nothing. The collusion claim is dead. She is not allowed to blame Hillary Clinton for being the most unlikable candidate who run a lame campaign. Who then can be blamed for the outcome of the 2016 election?

After some deep thinking Pelosi finally found the people who are guilty of winning Trump the election:

Washington, D.C. – Speaker Nancy Pelosi issued this statement after Special Counsel Mueller released a seven-count indictment of top Trump campaign advisor Roger Stone, for lying to Congress, witness tampering, and obstruction:“The indictment of Roger Stone makes clear that there was a deliberate, coordinated attempt by top Trump campaign officials to influence the 2016 election and subvert the will of the American people. …

Top Trump campaign officials deliberately tried “to influence the 2016 election”? Holy moley! They “subverted the will of the American people” by asking them to vote for Trump? Incredible! The Trump campaign worked to get Trump elected? Isn’t that illegal?

“In the face of 37 indictments, the President’s continued actions to undermine the Special Counsel investigation raise the questions: what does Putin have on the President, politically, personally or financially? Why has the Trump Administration continued to discuss pulling the U.S. out of NATO, which would be a massive victory for Putin?

Last week we listed the many good things Trump did for Russia which proves that he is totally under Putin’s influence. But that was meant as satire. In fact Trump made dozens of decisions that severely hurt Russia’s interests. He lauds NATO and uses it to press other states to buy more U.S. weapons.

Do the Democrats think that spewing such nonsense will attract voters? Or is it a diversion from the fact that they fail to attack Trump’s disastrous policies on all but the most minor issues?