Daniel J. Flynn has produced a truly remarkable work detailing San Francisco’s descent into multicultural madness in the 1970s. In Cult City. Jim Jones, Harvey Milk, and 10 Days that Shook San francisco, the prolonged orgy that characterized San Francisco civic life resulted in two disasters. It culminated in the Jonestown massacre in November 1978, claiming 918 lives, including 287 children, and then a few days later, in the assassination of Mayor George Moscone and city supervisor Harvey Milk at the hands of a dismissed public employee Dan White.  Flynn shows incontrovertibly that these events went together as a form of cosmic justice. Moscone and gay activist Harvey Milk had been among the biggest boosters of the mentally unhinged Jim Jones, who had pushed his followers into committing suicide in Guyana on November 17.

Since the early 1970s, Jones had been a celebrity in California Democratic politics and prefigured the culturally leftist course that his party would take nationwide in the ensuing decades. Jones was well-connected to black radicals like Angela Davis; he identified with the rising gay insurgency championed by his friend Milk; and he led a cult that combined New Age features with devotion to Jones as a leader with supernatural powers. By the way, it was only by reading Flynn’s book and then interviewing him in a podcast that I became aware that Jones was white. His charismatic power over blacks, who comprised most of his following, made me assume that he too was black. When he took his devotees to Guyana, where he conspicuously starved and abused them, he continued to enjoy the fervent support of the entire Democratic establishment. Whenever a complaint began to circulate, his highly placed army of defenders would spring to his aid. These included President Jimmy Carter, California Governor Jerry Brown, who succeeded Ronald Reagan in 1975, Lieutenant Governor Mervyn Dymally,  U.S. Senator Dianne Feinstein, Speaker of the California House of Representatives Willie Brown, Mayor Moscone of San Francisco to City Supervisor Milk. Prominent journalists like Abe Rosenthal at the New York Times, were also found among Jones’s legion of political admirers. 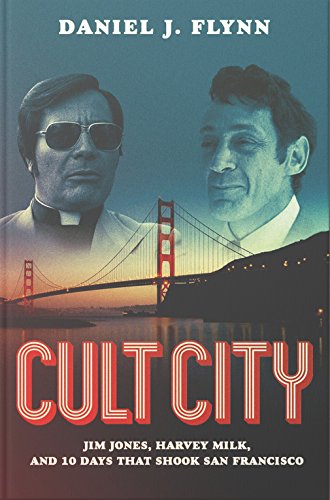 Before Jones dragged off his crowd to Guyana, he ran the Peoples Temple in San Francisco. There, no matter what scam he engaged in to increase his private wealth as a “religious and civic leader,” (and Flynn is not hesitant to reveal these misdeeds) he always had political allies who covered his back. Had Jones stayed in California and not fallen prey to murderous and suicidal tendencies, he might have remained a force in Democratic politics and possibly been elected to high state office. After he killed himself and got his followers to “drink the kool aid,” what happened was described in misleading terms, as Flynn carefully explains. It was made to appear (and this was my impression too in 1978) that Jones was a fundamentalist religious fanatic, who because of his (presumably Christian) fanaticism planned and assisted in the deaths of hundreds of people. Flynn demonstrates that Jones was anything but a devout Christian. He was an admirer of Soviet communism and encouraged his followers to donate money to the Soviet state. He also tore up copies of the Bible, which he considered unacceptable competition for his own evolving belief system. Not surprisingly, all of Jones’s erstwhile friends went along with this doctored narrative and explained the Jonestown massacre accordingly.