Bill Browder Strikes Back in Europe

“I am altering the deal. Pray I don’t alter it any further.”
— The Empire Strikes Back

Since Vladimir Putin brought up Bill Browder’s name in Helsinki events have escalated to a fever pitch.  Russia is under extreme attack the U.S./European financial and political establishment.

And part of that push is coming from Browder himself.  In July, just a week after Helsinki, Browder opened up a money laundering complaint against Denmark’s largest bank, Danske, alleging over $8 billion in money ‘laundered’ from Russia, Moldova and Azerbaijan through its Estonian Branch.

The details here are important so bear with me.

Danske’s report on these allegations are due on Wednesday.

No matter what they say, however, the die has been cast.

Danske is being targeted for termination by the U.S. and possible takeover by the European Central Bank.

There’s precedent for this but let me lay out some background first.

Browder’s complaint says the money laundered is in connection with the reason why he was thrown out of Russia and the $230 million in stolen tax money which Browder’s cause célèbre, the death of accountant Sergei Magnitsky, hangs on.

That crusade got the Magnitsky Act passed not only in the U.S. but all across the West, with versions on the books in Canada, Australia the EU and other places.

Danske’s shares have been gutted in the wake of the accusation. 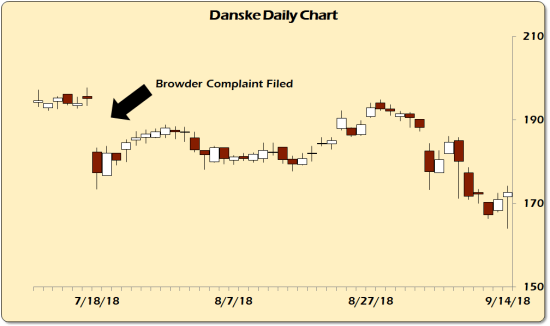 The U.S. is now investigating this complaint and that shouldn’t come as much of a shock.

The Treasury Department can issue whatever findings it wants, and then respond by starving Danske of dollars, known as the “Death Blow” option the threat of which was plastered all over the pages of the Wall St. Journal on Friday.

Note this article isn’t behind the Journal’s pay-wall.  They want everyone to see this.

Browder filed complaints both in Denmark and in Estonia, and the Estonian government was only too happy to oblige him.

To see the whole picture I have to go back a little further.

Back in March, Latvian bank, ABLV, was targeted in a similar manner, accused of laundering money.  Within a week the ECB moved in to take control of the bank even though it wasn’t in danger of failing.

It was an odd move, where the ECB exercised an extreme response utilizing its broader powers given to it after the 2008 financial crisis, like it did with Spain’s Banco Popular in 2017.

Why? The U.S. was looking for ways to cut off Russia from the European banking system.  And the ECB did its dirty work.

I wrote about this back in May in relation to the Treasury demanding all U.S. investors divest themselves of Russian debt within thirty days.
It threw the ruble and Russian debt markets into turmoil since Russian companies bought a lot of euro-denominated debt after the Ruble Crisis of 2014, having been shut off from dollars.

ABLV was a conduit for many Russian entities to keep access to Europe’s banks, having been grandfathered in as clients when the Baltics entered the Euro-zone.

So, now a replay of ABLV’s seizure is playing out through Browder’s money laundering complaint against Danske.

The goal of this lawsuit is two-fold.

The first is to undermine the faith in the Danish banking system. Dutch giant ING is also facing huge AML fines.

This is a direct attack on the EU banking system to being it under even more stringent government control.

The second goal, however, is far more important.  As I said, the U.S. is desperate to cut money flow between the European Union and Russia, not just to stop the construction of Nordstream 2, but to keep Russia’s markets weak having to scramble for euros to make coupon payments and create a roll-over nightmare.

In response to the Ruble’s sharp drop this year on improving fundamentals, the Bank of Russia finally had to raise rates on Friday.

So, attacking a major bank like Danske for consorting with dirty Russians and using Mr. Human Rights Champion Browder to file the complaint is pure power politics to keep the EU itself from seeking rapprochement with Russia.

Anti-Money Laundering laws are tyrannical and vaguely worded. And with the Magnitsky Act and its follow-up, CAATSA, in place, they help support defining money laundering to include anything the U.S. and the EU deem as supporting ‘human rights violations.’

Seeing the trap yet?

Now all of it can be linked through simple accusation regardless of the facts.  The bank gets gutted, investors and depositors get nervous, the ECB then steps in and there goes another tendril between Russia and Europe doing business.

And that ties into Browder’s minions in the European Parliament, all in the pay of Open Society Foundation, issued a threat of invoking Article 7 of the Lisbon Treaty to Cyprus over assisting Russia investigate Browder’s financial dealings there.

Why?  Violations of Mr. Browder’s human rights because, well, Russia!

What’s becoming more obvious to me as the days pass is that Browder is an obvious asset of the U.S. financial and political oligarchy, if not U.S. Intelligence. They use his humanitarian bona fides to visit untold misery on millions of people simply to:

1) cover up their malfeasance in Russia

2) wage hybrid war on anyone willing to stand up to their machinations.

Because when looking at this situation rationally, how does this guy get to run around accusing banks of anything and mobilize governments into actions which have massive ramifications for the global financial system unless he’s intimately connected with the very people that operate the top of that system?

How does this no-name guy in the mid-1990’s, fresh ‘off the boat’ as it were, convince someone to give him $25 million in CASH to go around Russia buying up privatization vouchers at less than pennies on the dollar?

Danske is the biggest bank in Denmark and one of the oldest in Europe.  The message should be clear.

If they can be gotten to this way, anyone can.

Just looking at the list of people named in the Magnitsky Act, a list given to Congress by Browder and copied verbatim without investigation, and CAATSA as being ‘friends of Vladimir’ it’s obvious that the target isn’t Putin himself for his human rights transgressions but anyone in Russia with enough capital to maintain a business bigger than a chain of laundromats in Rostov-on-Don.

Honestly, even some in the U.S. financial press said it looked like they just went through the Moscow phone book.

But, here the rub. In The Davos Crowd’s single-minded drive to destroy Russia, which has been going on now for close to two generations in various ways, they are willing to undermine the very institutions on which a great deal of their power rests.

The more Browder gets defended by people punching far above his weight, the more obvious it is that there is something wrong with his story.  Undermining the reputation of the biggest bank in Denmark is a ‘playing-for-keeps’ moment.

But, it’s one that can and will have serious repercussions over time.

It undermines the validity of government institutions, exposing corruption that proves we live in a world ruled by men, not laws.  That the U.S. and EU are fundamentally no different in their leadership than banana republics.

And that’s bad for currency and debt markets as capital always flows to where it is treated best.

But, it’s one that can and will have serious repercussions over time.  The seizure of ABLV and 2017’s liquidation of Spain’s Banco Popular were rightly described by Martin Armstrong as defining moments where no one in their right mind would invest in a European banks if there was the possibility of losing all of your capital due to a change in the political winds overnight.

Using the European Parliament to censure Cyprus via Article 7 over one man’s financial privacy, which no one is guaranteed in this world today thanks to these same AML and KYC laws, reeks of cronyism and corruption of the highest degree.

If you want to know what a catalyst for the collapse of the European banking system looks like, it may well be what happens this week if Danske tries to fight the spider’s web laid down by Bill Browder and his friends in high places.