The Dumbest Thing Ever Said about Trade

Our Country was built on Tariffs, and Tariffs are now leading us to great new Trade Deals – as opposed to the horrible and unfair Trade Deals that I inherited as your President. Other Countries should not be allowed to come in and steal the wealth of our great U.S.A. No longer! ~ President Donald Trump

You only have to look at our trade deficit to see that we are being taken to the cleaners by our trading partners.

I am all for free trade, but it’s got to be fair. When Ford moves their massive plants to Mexico, we get nothing. I want them to stay in Michigan.

When a country (USA) is losing many billions of dollars on trade with virtually every country it does business with, trade wars are good, and easy to win,

Manufacturing jobs need to be brought “back home where they belong,” although many Trump branded products were manufactured overseas.

Just recently, on the South Lawn of the White House, Trump spoke about the U.S. economy after the Bureau of Economic Analysis released the latest GDP figures. Naturally, since Trump is an economic nationalist with a mercantilist mindset, and his ignorance and incoherence on trade know no bounds, he made these statements:

At the same time, we are finally cracking down on decades of abusive foreign trade practice. We were abused by companies. We were abused by the companies within countries. But in particular, we were abused by countries themselves, including allies. Abused like no nation has ever been abused on trade before. Because we had nobody watching. They stole our jobs and they plundered our wealth. But that ended.

Perhaps the dumbest thing that Trump has ever said about trade (see the opening and last quotes) is that via trade, other countries can come in and steal the wealth of America. 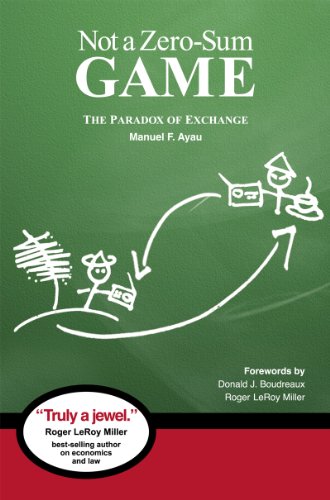 Trade is voluntary commercial exchange, usually of a good or service for cash. Although trade is properly just engaging in commerce, it is commonly what we call international commerce. Free trade is just commercial freedom from government interference.

That trade takes place between entities residing in two different countries is of no consequence. Exports are not preferable to imports. Manufacturers who export should not hold a protected position in a nation’s economy. Merchants who import should not be penalized for doing so.

Trade is always a win-win proposition. In every exchange, each party gives up something it values less for something it values more. Each party to a transaction values differently the goods or services being exchanged. Each party anticipates a gain from the exchange or it wouldn’t engage in commerce with the other party. And each party will repeat the exchange again if its estimated gain has proved to be satisfactory.

Trade promotes efficiency in production and utilization of resources. Trade gives consumers a wider variety of choices and contributes to price stability. Trade leads to innovation and investment. Trade fosters peace and goodwill.

No country can steal our wealth and plunder us because entities within the country sell goods or services to entities in the United States.

Previous article by Laurence M. Vance: Conservatives Should Be Embarrassed

McCain’s Legacy in Ukraine When ‘Tokyo Rose’ Ran for President