Christopher Robin: A Winnie the Pooh Movie for Adults

Finally, a summer film that's light on CGI and demographic pandering, and heavy on joy.

By John Ehrett
The American Conservative

One of the most memorable books I’ve read is Lev Grossman’s 2009 fantasy novel The Magicians, in which a group of disaffected young adults stumbles into the Narnia-like world of their youthful imaginings. But rather than discovering hope and meaning, they find only a new canvas on which their worst, most hedonistic instincts play out. It’s a haunting indictment of “escapist” impulses in fantasy literature.

Christopher Robin—a spiritual sequel to A.A. Milne’s classic Winnie the Pooh stories centered on their human protagonist (Ewan McGregor)—springs from a similar premise, but takes precisely the opposite thematic tack. If The Magicians is a story about the loss of innocence, Christopher Robin is a tale of regaining it.

As the film opens, Christopher bids farewell to his childhood companions—Pooh, Piglet, Tigger, Eeyore, and the rest—and departs the Hundred Acre Woods for boarding school. In an Up-style opening montage, we see his life unfold: being reprimanded by his teachers for daydreaming, mourning the sudden death of his father, meeting his wife Evelyn (Hayley Atwell), and struggling across the grisly battlefields of World War II. 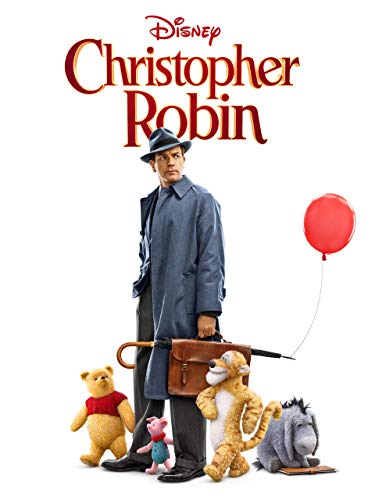 Upon his return from the war—and first meeting with his daughter—Christopher takes a job as efficiency manager at a luggage manufacturer. We meet adult Christopher just as he’s charged with reducing company expenses by 20 percent, a grim task likely involving headcount reduction. What’s more, the project will require him to work all weekend, forcing him to break a previous promise to accompany Evelyn and his daughter to the countryside.

Help is on the way though. The Hundred Acre Woods have grown dark and gloomy since Christopher’s departure, and Pooh won’t stand for it. The beloved bear slips through a hidden gateway and into London, where he’s promptly reunited with his old friend.

One thing’s for sure: Christopher Robin is a strange sort of movie, one that, unusually for risk-averse Hollywood, doesn’t clearly cater to a particular demographic. It’s a slow, elegiac film, largely taken up with long scenes of Christopher and Pooh talking about—I’m not kidding—the nature of the good life. And true to that sensibility, in this retelling Pooh occupies a space somewhere between Yoda and Socrates. He’s less interested in honey and pratfalls than in rekindling Christopher’s joy in being.

It’s Christopher Robin’s depiction of the loss of that joy that hits the hardest (and likely resonates the least with young viewers). A key subplot, for instance, involves Christopher’s fixation on his daughter’s test results. When she asks him to read to her before bedtime, he immediately turns to a textbook on industrialization in Victorian England. Children may know instinctively that something’s off about this, but they won’t really grasp the sharpness of the film’s point.

Another Way of Looking at the Pension CrisisA Force for Evil