Yesterday was a very dark day for free speech in America.

As the world witnessed the stunning collusion of Silicon Valley tech giants permanently banning Alex Jones and Infowars in a matter of 12 hours, conservative communications director for Turning Point USA, Candace Owens, saw her Twitter account suspended for her wordplay experiment with Sarah Jeong’s racist tweets, by switching the words from “white” to “jewish” and “black”.

Sarah Jeong, the @nytimes, and the truth about racism in America. https://t.co/adIqd4bc2n

RT CrossTalk host Peter Lavelle and The Duran’s Alex Christoforou break down the brilliant two-for-one bomb that Owens dropped on Twitter and the NYT’s Jeong.

Owen’s wordplay switcheroo not only called out the Harvard privileged Sarah Jeong for her racist hysteria, but also exposed the hypocrisy and bias of Twitter when dealing with the censorship of a conservative profile, as opposed to a liberal, ‘part of the team’, account.

Zerohedge reports that in response to the New York Times’ decision to stand by their most recent hire – open bigot Sarah Jeong, who really hates white people, men (especially white men), and cops – black conservative Candace Owens carried out a thought experiment  we mentioned last week in which we replaced the word “white” with “black” to illustrate Jeong’s animus.

A sample of Jeong’s controversial tweets…

Are white people genetically predisposed to burn faster in the sun, thus logically being only fit to live underground like groveling goblins

so Elonis is a perfect encapsulation of many of 2014’s themes:

Candace Owens cooked up a clever response to Jeong’s racism by replacing “white” with Jewish and Black.

Owens then condensed Jeong’s statements into several tweets. Predictably, her account was banned by Twitter for 12 hours… 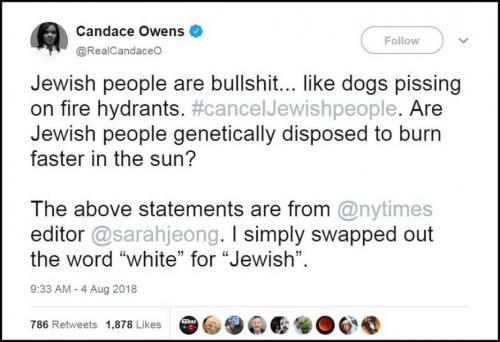 Black people are only fit to live underground like groveling goblins. They have stopped breeding and will all go extinct soon. I enjoy being cruel to old black women.

The above statements are from @nytimes editor @sarahjeong. I simply swapped out the word “white” for “black”.

By the way, she got banned by COPYING @sarahjeong tweets and replacing “white” with “black” and then @Twitter bans her for 12 hours

Zerohedge notes that Twitter only removed (or forced Owens to remove) her tweet about Jewish people, while the one in which she swapped the race from white to black remains as of this writing…

She got banned for this one where she replaced “white” with “jews,” which is now gone. Make no mistake about it: https://t.co/PLOpqnxKEL https://t.co/Jp0ULXPB4C

Luckily for Jeong, the way “white men” saw the world in the 50s was that South Korea should be free. https://t.co/QrAxph2pSj

She was immediately given a 12 hour suspension.

The absolute state of this platform.#FreeCandace

Meanwhile the Daily Caller reported on Sunday that Twitter tried walking back its ban, saying it was an error…

“Twitter takes reports of violations of the Twitter Rules very seriously,” Twitter’s support team wrote in an email to Owens, who shared it with TheDCNF. “After reviewing your account, it looks like we made an error.”

“This was our mistake and we’ve apologized to the account owner for the error,” a spokeswoman for Twitter told TheDCNF. The spokesperson did not say whether a human content monitor or an algorithm was responsible for suspending Owens’ account. –Daily Caller

“I actually AGREE with Twitter” said Owens, in a comment to Breitbart News. “These tweets are an example of hateful conduct. It begs the question — why was it okay when the hate was directed at White people? Why are her tweets still up?”

“In every way imaginable — Twitter has just proved my point. Racism in this country has been sanctioned against white people.”

After word of the suspension began to go viral on social media, Twitter reversed itself and reinstated Owens’ account. –Breitbart

Zerohedge further notes that Candace Owens may have been  suspended for her response to Hillary Clinton’s recent defense of Lebron James, who President Trump recently dissed over Twitter after James criticized Trump for fueling racial divides in the U.S.?

Lebron James was just interviewed by the dumbest man on television, Don Lemon. He made Lebron look smart, which isn’t easy to do. I like Mike!

.@KingJames is a great family man, incredible ballplayer, gives back to his community, and isn’t afraid to speak his mind. He’s a world class athlete and a class act. We need more like him in this world.

Candace Owens replied back to Hillary…

“This is rich. Your husband locked up more black men than any President in the history of the United States. You view Margaret Sanger (who wanted to exterminate the black race) as your idol and Robert Byrd (former Klansmen) as your mentor and dear friend.”

This is rich.
Your husband locked up more black men than any President in the history of the United States.
You view Margaret Sanger (who wanted to exterminate the black race) as your idol and Robert Byrd (former Klansmen) as your mentor and dear friend.

As Jeong’s twitter tirade against white people and police officers continues to expose social media platforms’ bias and censorship of conservative viewpoints, Zerohedge points out that the NYT has chosen to stand by Jeong – claiming that she was simply imitating other racists. Perhaps someday Twitter will let us in on what constitutes racism and harassment – since the goal posts seem to be all over the place depending on who said what.