We are accustomed to predatory language from politicians, but this issuance from Connecticut Senator Chris Murphy’s twitter account yesterday is particularly telling: 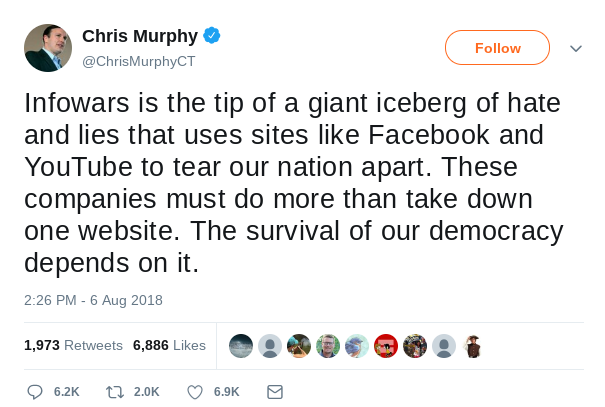 When a politician, particularly a US senator, tells companies what they “must” do, there is a clear threat of government action if they don’t. What exactly does Mr. Murphy imply for noncompliance? Harsh new regulations? Antitrust inquiries? Tax audits?

The word for this, as Justin Raimondo points out, is extortion.

Big Tech, however, is fully complicit in this era of growing “soft censorship” by ostensibly private companies. In the past 48 hours, several social media platforms —  including Facebook, twitter, YouTube (Google) and iTunes (Apple) — banned provocateur Alex Jones from their platforms. Jones often promoted guests like Dr. Ron Paul, Lew Rockwell, and Peter Schiff in the 1990s, when alternative voices were few and far between.

Senator Murphy did not have to lift a finger.

Yes, tech companies are private organizations with shareholders. Yes, nobody has a right to a platform, or a microphone, or an audience. Yes, nobody in America is being put in jail or fined by government for speech — yet (so-called hate speech laws already are in place across the West, and supported by many voters in the US). We do not advocate regulation of social media or technology companies under common carrier/utility theories or some tenuous expansion of public accommodations laws.

But the unholy nexus of state and corporate power is at the core of the libertarian critique. Big Tech is deeply involved with government at many levels, from data collection to spying to developing weapons and AI to providing cloud space to noxious federal agencies. Tech companies derive their economic, social, and cultural power not only from their competence in the marketplace, but increasingly from their connection to the state as well.

It is precisely this alliance that gives rise to justified criticisms of a power elite. Taken to its ultimate conclusion, the alliance becomes openly fascist. In this sense libertarians have every justification to oppose consolidations of economic power — and to recognize the blurring between First Amendment violations by express state actors and de-platforming of alternative voices by state-connected actors.

Is the Mises Institute next? Will we be de-platformed, shadow banned, or otherwise erased for promoting views — proudly radical, anti-state, and anti-war views — that the power elite cannot abide?

The answer lies in building independent platforms. Mises.org was a very early pioneer online, providing a critical forum for libertarian and Austrian writers beginning way back in October 1996. As a result, the site had a head start in becoming among the most-visited economics hubs in the world. Much of our site traffic is organic: visitors either direct their browser to the home page, or arrive at a particular page through search engines like Google.

Unlike newer sites, mises.org is less dependent on social media feeds to drive traffic to it — less than 20%. And while our traffic is robust, that 20% sourced from social media clicks will drop as platforms adjust their algorithms to punish content sites. They don’t want you clicking through to mises.org.

So while the site could and would survive being de-platformed by social media companies, it would not take much for search engines to “disappear” our content. Imagine typing “Austrian economics” or “Mises” into Google and finding no mises.org results — or having those results shunned to the twentieth page of results.

You can help fight back by taking small steps today: set mises.org as your homepage, and visit frequently to make sure you’re seeing articles and content that social media outlets hide from your feeds. When you do see our articles pop up, help us by clicking through. And circulate them via email to acquaintances using direct links, rather than simply sharing social media posts that in many cases disappear down a rabbit hole.

The state and its cronyist friends have built a world that seeks to silence our perspectives. We must recognize that arguments and content mean nothing if conduits for disseminating them are shut down.

Previous article by Jeff Deist: Jeff Sessions Is All Wet