I am back at work after my version of the typical 3-week French vacation in July and August. I say typical in terms of length (though very often it is 4 weeks) and some of what I did. I was in the office last week and there was no more than 30% of the people in my group, as the 3-4 weeks is taken by virtually everyone over the last weeks of July through August. Many businesses, especially small shops are closed during this period. My vacation was also typical because I spent time in the countryside.  I am extremely lucky to own a French country house. From there we took other side trips as I explain in more detail below. 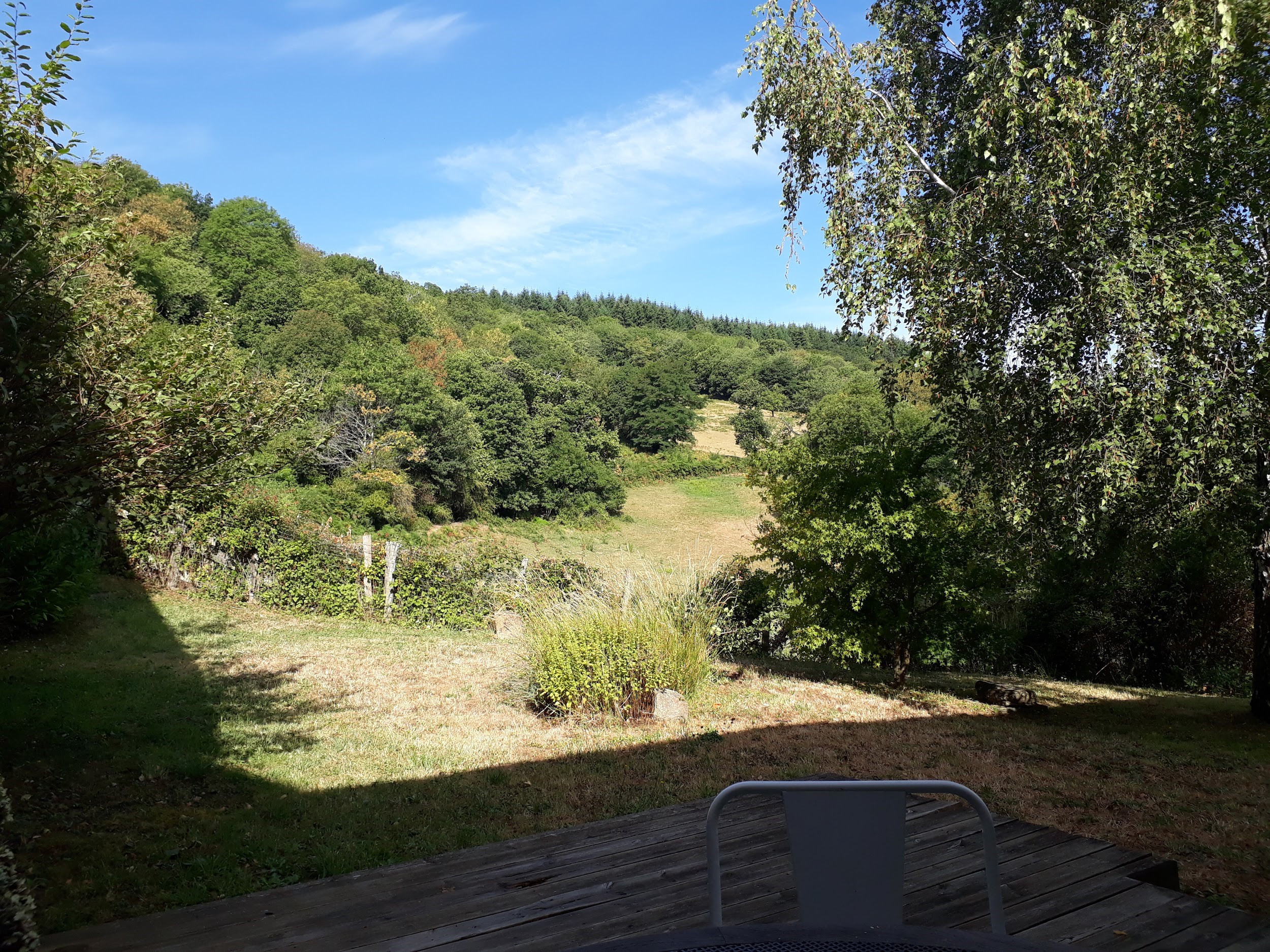 This is the view from the deck during my morning coffee.

Between the Medieval and the Romantic 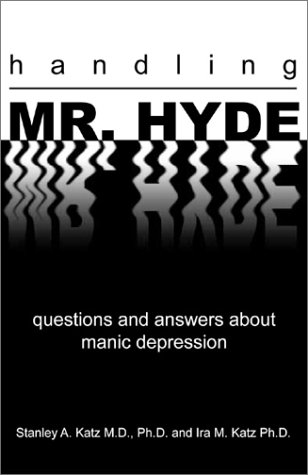 Our house is located in southern Burgundy, between the towns of Cluny and Mâcon. Cluny was the location of the great Medieval Benedictine Abbey of Cluny, truly one of the great cultural achievements of Christendom. The physical structures fell victim to the Jacobin “Taliban” of the French Revolution. As Wikipedia explains, “Seen as an example of the excesses of the Ancien Régime, the monastic buildings and most of the church were destroyed in the French Revolution. Its extensive library and archives were burned in 1793 and the church was given up to plundering. The abbey’s estate was sold in 1798 for 2,140,000 francs. Over the next twenty years the Abbey’s immense walls were quarried for stone that was used in rebuilding the town.” Today it is a lovely and lively country town with a university and an equestrian center. The influence of the abbey was important through most of western Europe, but especially in Burgundy with many other sites of Clunisois architecture in the area. 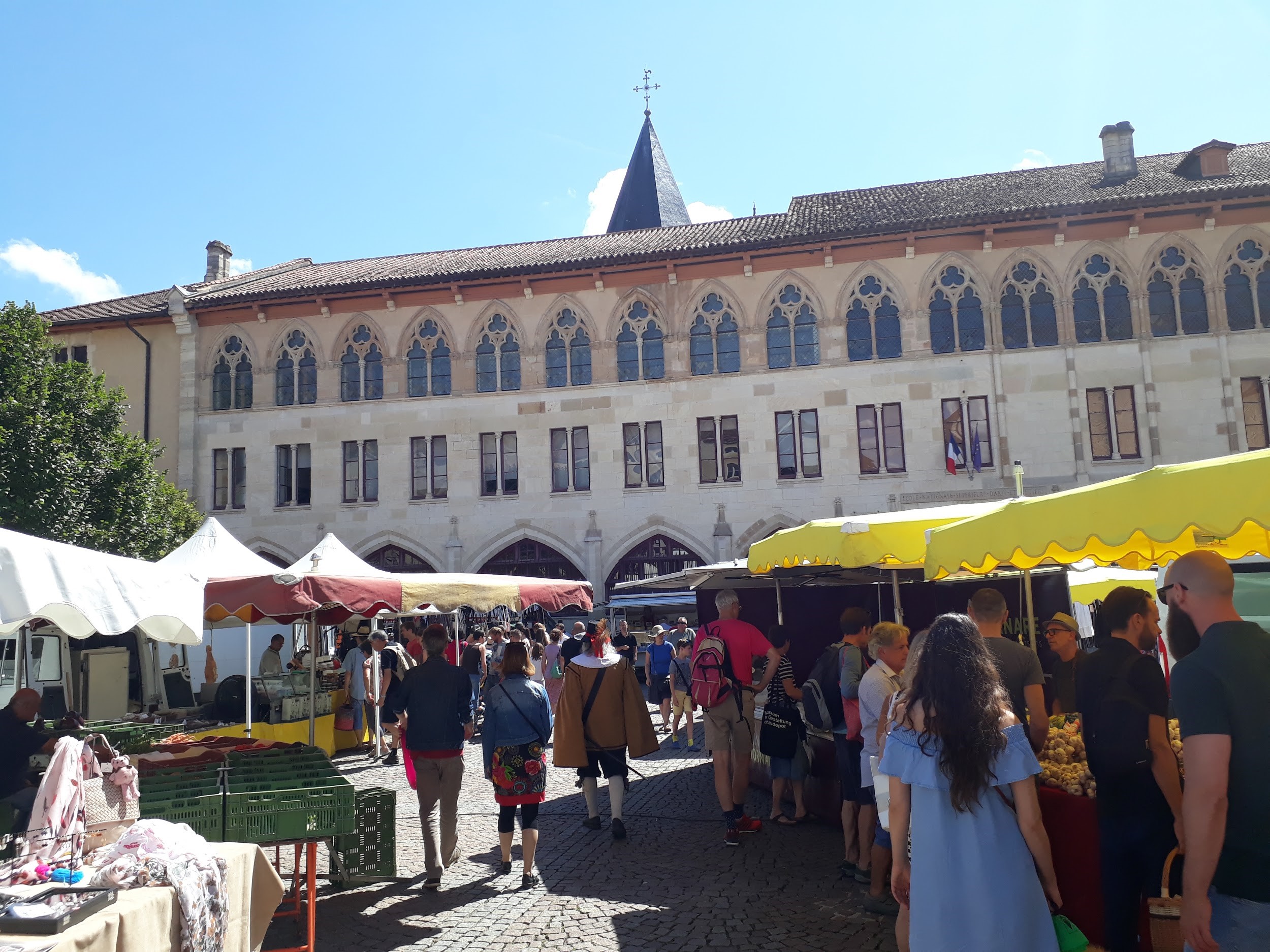 Cluny on market day (the remains of the abbey are in the background).

Mâcon was an important administrative town on the Saône river.  It gives its name to the wine appellation west of the city called Macon Villages that is spread among the rolling hills called the Mâconnais. It was near here in the 13th century that the Mongol tide in Europe finally ebbed (according to Hilaire Belloc at Tournus just north of Mâcon).

A wide angle view of Mâcon from the east bank of the Saône (from Wikipedia).

Mâcon’s most well known resident was Alphonse de Lamartine, politician and man of letters. He lived in and around Mâcon and wrote romantic poetry about his experiences exploring the Mâconnais. His family’s country house is in a village that changed its name in his honor, Milly-Lamartine.  “Route de Lamartine” signs are found throughout the region. It should be noted that today Mâcon is now probably more known for another native son, Antoine Griezmann, a hero of the French World Cup winning team.

Lamartine (from Wikipedia) and Antoine Griezmann

See below an excerpt from Lamartine’s Cantique sur un rayon de soleil (Song on a ray of sunshine with English translation by Google). Even with the poor translation you can imagine the view from my deck.

During the period of a canicule (French for a heat wave) our greatest relief was at this local lake near the village of Saint Point. With all of the families and easy going atmosphere it feels like entering into a Norman Rockwell (any relation to our host?) painting. 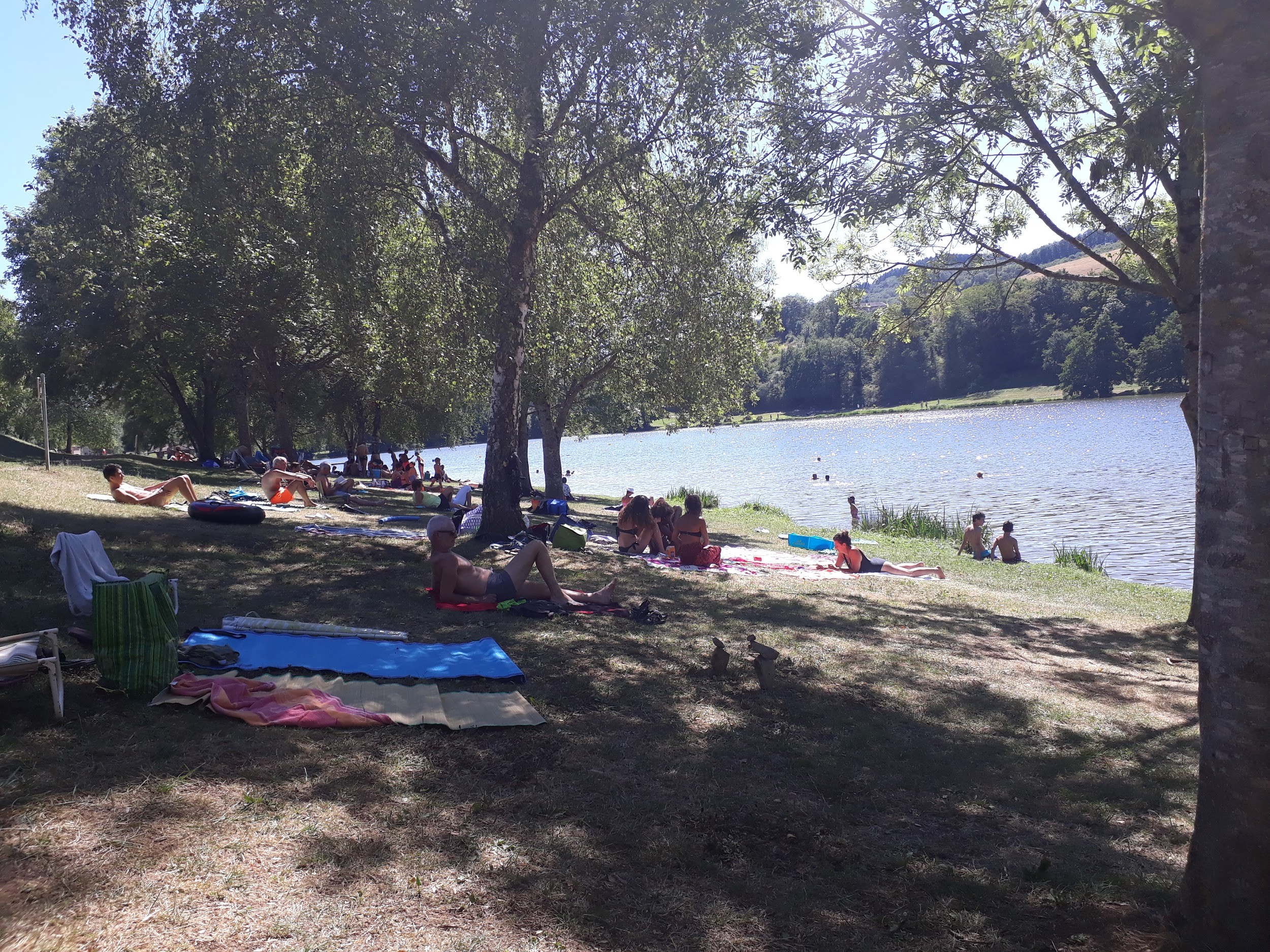 To the Mountain Top

The first weekend of our vacation my wife and I attended the birthday party of a friend. She lives in a lovely house overlooking Lake Annecy; a really, really nice place. But just before leaving my wife explained that the party was not in the house but in the mountains in a refuge (a waystation for hikers that serves food and has essentially floor space with mats for sleeping). To get there we had to hike up the mountain (about a 600 m change in altitude) over about 1 and ½ hours. Not what I expected. But all was well in the end, I was not too worn out and the party was fun. The proprietor of the refuge reminisced with us about a Bond film that was made there about 20 years ago starring the French actress Sophie Marceau as the Bond girl. It was cloudy and misting when we arrived, but there was a portent of a good time: a rainbow. In the morning the sky cleared enough for us to have a view of Mont Blanc, the highest mountain in western Europe.

Upon arrival and the view of Mont Blanc from the refuge the morning after the party.

A Sojourn to the South

My 10 year old daughter requires more entertainment than her parents can provide. Thus, we often invite her friends to stay with us at the country house.  The return invitations are also common and this year my daughter was asked to stay one week with a friend at the grandmother’s home in Saint Tropez. My wife and I made a trip south to recuperate our daughter. The brief first stop was to visit my mother-in-law in Lyon. While there we had lunch at the renowned Brasserie Georges, serving food and beer since 1836, still with the Art Deco styling installed in the 1920s.

From Lyon we headed to Orange, an old Roman city in the Rhone valley. Normally it is about 2 hours drive on the highway, but it took us about 3 ½ as France can become like a big parking lot during vacation periods. We stopped at Orange to attend the opera staged in the old Roman Theater. In this ambiance the Barber of Seville (in the setting of the 60s during Fellini film production) could not have been better; except perhaps for the replacement tenor in the role of Count Almaviva who had a relatively weak voice. 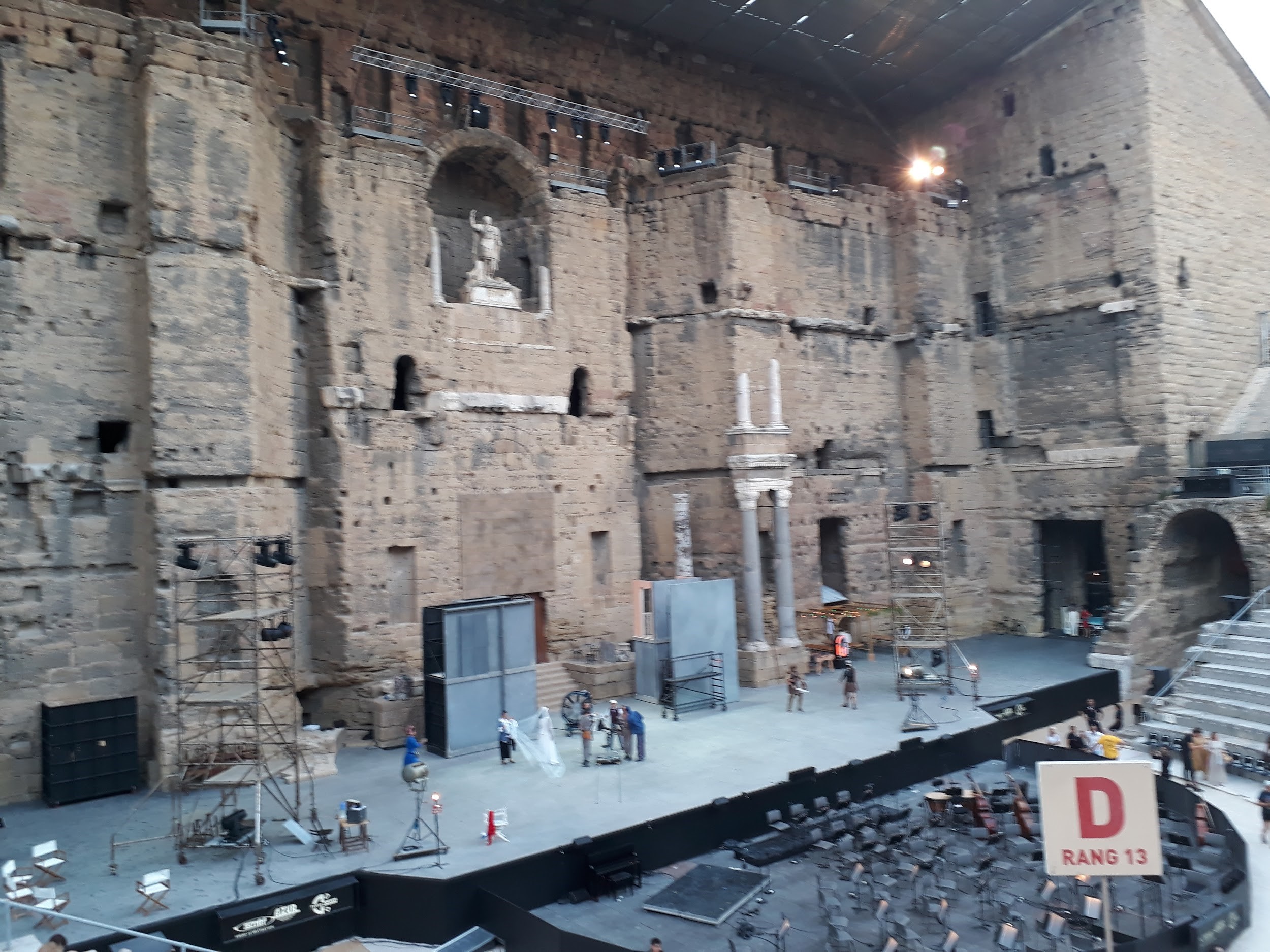 The Roman theater in Orange

From Orange we descended further south to spend the night with a friend in Marseille, but our meeting place was in the village Ensuès-la-Redonne, west of the city along the Côte Bleue. She took the train from the city that follows the magnificent coastline called the Côte Bleue. After a pleasant lunch next to a little harbor (gambas flambées au pastis) we walked along the cliffs to an isolated rocky beach for a swim. The water was crystal clear and refreshing during the heatwave. After a little dinner party that evening we were off to find our daughter in Saint Tropez the next day. 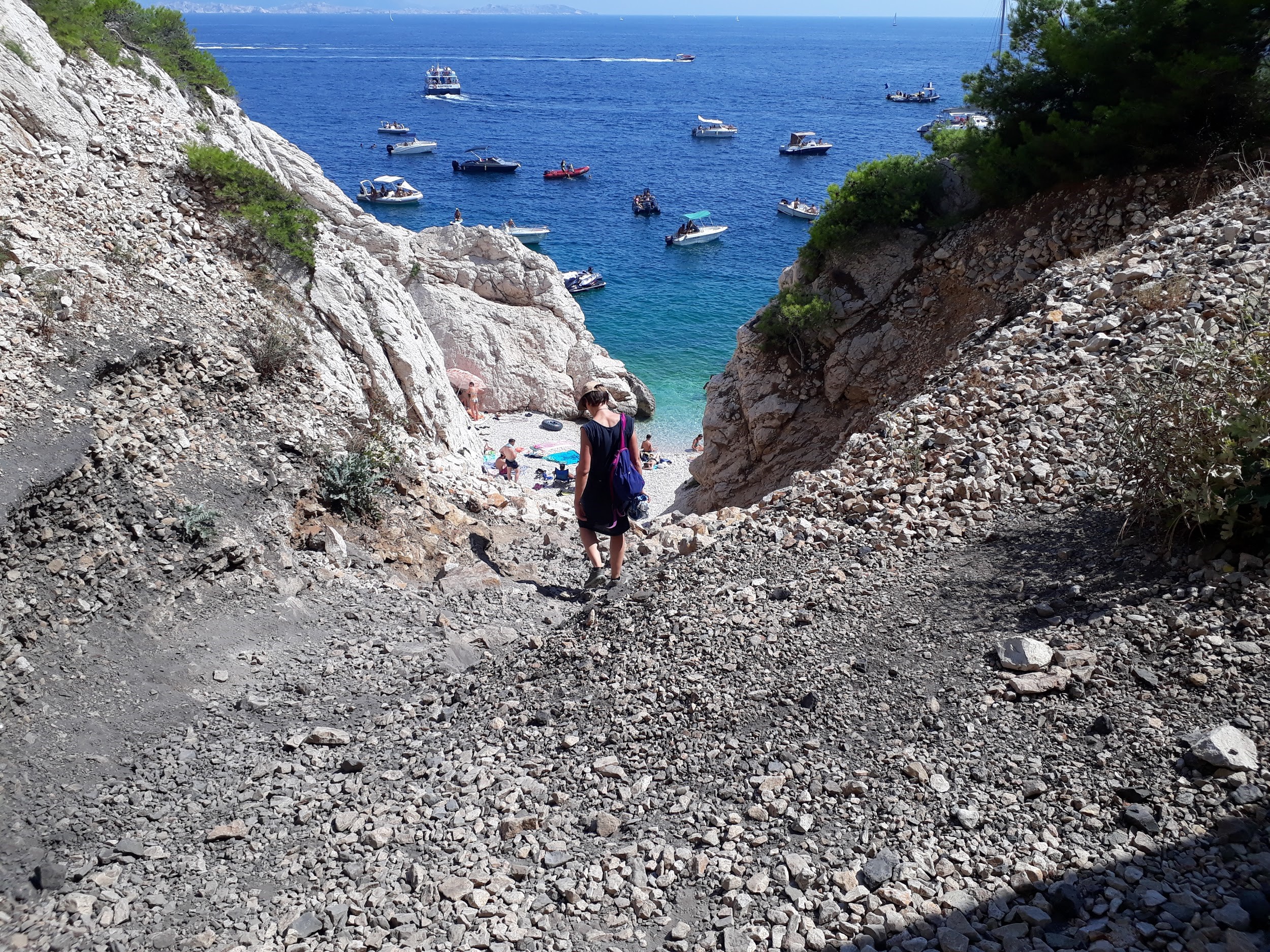 My wife descending to the rocky beach along the Côte Bleue west of Marseille.

Down and Out in St. Tropez

If you enter the village by car you inevitably will be in a traffic jam. Thus, I counted myself among the hoi polloi that are down and out (apologies to Orwell) in Saint Tropez. It is understandable why Saint Tropez is such an attractive destination; great weather, quaint village, and visions of the famous long-time resident Brigitte Bardot make this a place to see and be seen. It was a fishing village in the 50s when Bardot arrived.  Supposedly there is a last fisherman working out of Saint Tropez, but I only saw the big ugly power yachts in the harbor, more an extension of local discos than water transportation. Taking a walk through the village packed with tourists and fancy boutiques, we came across a monumental structure (art?), primarily consisting of several busts of Lenin enmeshed in copper pipes by the artist named Arman. My first impression was disbelief in the absurdity of placing the communist icon amidst the ostentatious wealth of Saint Tropez. After researching the title on the internet, it is called “Distillerie Ideologique,” I now understand the reason for the copper pipes; and if any historic individual embodied distilled ideology (Who Whom) Lenin would be the one. So upon further reflection, maybe it could make the vacationers stop and think about their good fortune and how it is at risk due to ideology. But I doubt it.

A floating disco in Saint Tropez harbor and Distillerie Ideologique.

We finished our vacation in Burgundy, among the vineyards, forests and fine food.  As far as I can tell, western civilization to going to hell in handbasket, so I wonder if the French summer  vacation can continue? As a Socialist experiment I doubt it. Anyway, at least I give thanks for my good fortune that at least for now, I am still able to enjoy life in this beautiful country.

The Feds Hate These BooksWhy I Love