Jimmy Carter may have been the last Jeffersonian to be president. A recent article in the Washington Post labeled him the “Un-Celebrity President.” In either case, Carter is a reflection of a people and a place. He is the most authentic man elected president since Calvin Coolidge, and like Coolidge a true Christian gentleman.

At the very minimum, Carter represented the Founders’ vision for a republican executive. He walked to his inaugural, refused to have “Hail to the Chief” played while he boarded Air Force One or Marine One, carried his own luggage, and when soundly defeated by Ronald Reagan went home to Plains, Georgia to the same two bedroom rancher he built in 1961. He’s never left.

It used to be standard practice for a president to go home and forget public affairs. George Washington had been almost dragged from Mt. Vernon to assume office and gladly resumed the life of a planter when he stepped down in 1797. John Adams snubbed Jefferson in 1801 by taking what amounted to a public bus back to Massachusetts, but he never again left his home State and stayed away from the public eye. Jefferson resumed his very busy life at Monticello in 1809, happy to leave behind the nasty busy of politics. James Madison spent his last years editing his papers and correspondence and was briefly involved in Virginia politics, but he only offered policy positions when asked in private letters. James Monroe went home and was never heard from again. That was the Founders’ executive, the republican who puts down the plow and enters office out of duty but who quietly goes home and resumes a private life once their time in Washington is over. 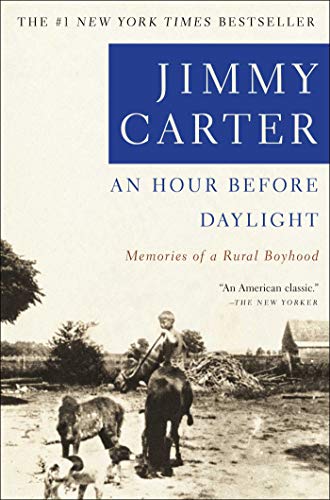 Carter, of course, was the consummate outsider and probably the last agrarian who will ever hold that office. Other than Thomas Jefferson’s Notes on the State of Virginia, his An Hour Before Daylight is the only agrarian treatise written by a president. Carter admired Harry Truman, perhaps the most middle class man to ever hold the office. Both men reflected positively on Southern heroes, their Southern homes, and their Confederate ancestors. But unlike Truman, Carter was never a political thug who would sink to purchasing votes for power. He was probably too nice for Washington. That should be a badge of honor. Truman would kneecap his opponent and then lie about it. Carter refused to get in the gutter.

Certainly Carter had his problems as president, but most of this involved perception not policy. Carter can be credited with beginning the deregulation of the Ronald Reagan era and with installing Paul Volcker as Federal Reserve chairman, a move that helped end the destructive inflation of the 1970s. He also pushed for American energy independence long before it was trendy. Carter’s record on taxation and foreign policy are mixed at best, and no one would credit him with doing anything to end the Cold War, but he was as interested in negotiation and diplomacy as Reagan but without a willing partner in Moscow. Carter’s insistence that people put on a sweater when it was cold and turn down the thermostat rubbed the consumerist American culture the wrong way, but that was the Southern man in him. “Environmentalism” was in fact just a Northern distortion of Southern agrarian. Carter could eloquently discuss Civil Rights and race because unlike most men who lived at Pennsylvania Ave., he had been around African-Americans his entire life. He was a reconciliationist in Washington, something most ideologues could not and cannot understand.

Previous article by Brion McClanahan: Anything Is Nice

Protectionism Abroad Why Do Some Libertarians