The Many Ways the Pope Is Wrong About Capitalism

It is hardly a secret that Pope Francis opposes the free market. On what grounds does he do so? Do any of these grounds have merit? What are the sources of his ideas? How similar are his views to those of previous Popes? These are among the questions addressed by the contributors to this important book. Pope Francis and the Caring Society, edited by Professor Robert M. Whaples.

The Pope maintains that the free market encourages the false ideology of “consumerism.” People under capitalism want more material goods, but their pursuit ends not in happiness but in futility. Robert M. Whaples, the editor of the volume and Professor of Economics at Wake Forest University, points out that in “[his encyclical] Laudatio si’, Francis argues that this excessive, self-destructive consumption on the part of the rich is partly the fault of markets. ‘[T]he market tends to promote extreme consumerism in an effort to sell its products, [and] people can easily get caught up in a whirlwind of needless buying and spending. . . This paradigm leads people to believe that they are free as long as they have the supposed freedom to consume.’ The market caters to people’s emptiness. ‘When people become self-centered and self-enclosed, their greed increases. The emptier a person’s heart is, the more he or she needs things to buy, own, and consume. It becomes almost impossible to accept the limits imposed by reality.’” (pp. 10-11)

The Pope has missed the target. The free market is a means by which consumers can satisfy their preferences. It does not dictate what these preferences must be. An advocate of the free market can with complete consistency favor a simple style of life. If people want more and more material goods, the market will supply these; but “consumerism” and capitalism are very different things. 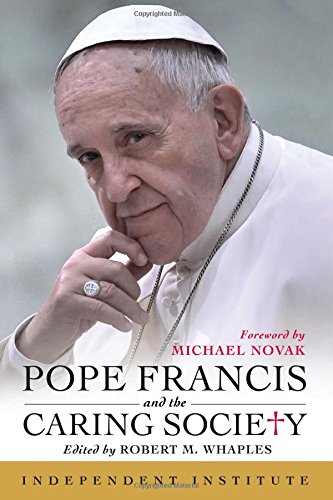 Consumerism, the Pope alleges, merits condemnation not only because it leads people astray about the nature of the good life. It also makes people treat with indifference the plight of the poor. In arguing in this fashion, the Pope turns a blind eye to a fundamental point. The rise and development of capitalism has resulted in a massive decrease in global poverty. As Lawrence J. McQuillan and Hayeon Carol Park aptly note, “Wealth must first be created before it can be given to others. Capitalism is the greatest wealth creator the world has ever seen, lifting billions of people out of abject poverty. The pope’s antimarket fervor stands at some distance from the facts.” (p.95)

Whaples reinforces this point. “According to economists. . .the numbers simply don’t support this [anti-capitalist] position. Branko Milanovic has traced out the worldwide income distribution in recent decades as people in countries around the world have used markets to expand trading and as technology—largely developed by the world’s profit-driven firms— has spread to poorer countries. His numbers are stunning and show that the whole world is getting richer.” (p.25)

Opponents of capitalism might respond in this way. Even if it is true that capitalism has helped the poor, this fails to prove that capitalists are beneficent. The benefits to the poor arise from the superior productivity of capitalism. The entrepreneurs who drive the system aim for as much profit as possible. Self-interest, not good feelings for the needy, motivates them.

This argument is vulnerable at two points. First, even if self-interest motivates capitalists, so what? Would not the poor care much more about their better lives than the purity of the capitalists’ motives? (By the way, why is it taken for granted that self-interest is “bad”?)

In his failure to take adequate account of this point, Pope Francis ignores a line of thought stressed by the seventeenth-century Jansenists. As A. M. C. Waterman explains: “The market economy. . .is a powerful instrument for bringing ‘personal interest’ and ‘the interest of society as a whole’ into ‘fruitful harmony.’ Jansenists of the late seventeenth century were the first to see this confluence clearly, and their insight was fully developed in the classical political economy of the English School. Jansenist theology was deeply Augustinian. . .The institutions of human society, such as the market economy, are conceived in sin and must always be imperfect. Yet under Divine Providence they may become a remedy for the ‘wound of original sin’ by recruiting self-interest to the common good.” (p.148)

The second point at which the response of the opponents of capitalism is vulnerable challenges more directly their main contention. It is false that capitalists are motivated entirely by self-interest. The opponents of the free market ignore charity. In fact, McQuillan and Park note, “There is ample evidence that capitalism and its core institutions—private-property rights and economic freedom—are key drivers of private charitable giving. The link is important because private charity is the most effective form of charity for uplifting the poor, whereas government redistribution is inefficient, largely ineffective, and often counterproductive.” (p.111)

Pope Francis criticizes the free market for yet another alleged failure. It despoils the environment. Precisely the opposite is the case, as Robert Murphy reminds us in a characteristically excellent article. ”How can we ensure that unborn future generations have access to tin, copper, natural gas, and so on?. . .The short answer is that so long as there are secure property rights—a condition that rules out the government imposing a ‘windfall profits’ tax when resource prices rise—-then normal market operations, especially in advanced economies with sophisticated futures markets, provide an elegant solution to the problem.” (p.209)

Murphy answers alarmism about “climate change,” another feature of the Pope’s encyclical. Drastic restrictions on production are defended as “insurance” against an environmental catastrophe. Murphy responds: “Yet if the proper justification for aggressive climate change policies is insurance for unlikely events ‘just in case,’ then it should be clear that the public has been misled all this time. Nobody sells a homeowner fire insurance by saying, ‘We can see the ravages of the fire on your property as we speak!’” (p.218)

However well-meaning Pope Francis may be, he has failed to understand how a free economy works. Economics is a science, and to ignore economic law is futile. As Mises trenchantly observes, “it is futile to approach social facts with the attitude of a censor who approves or disapproves from the point of view of quite arbitrary standards and subjective judgments of value. One must study the laws of human action and social cooperation as he physicist studies the law of nature.” (Human Action, Scholar’s Edition, p.2)

Previous article by David Gordon: The Danger of ‘Market Fundamentalists’

How Good Is Your Spelling? Sarkozy’s Hand in the French Cookie Jar?