Revisionist historians are dismissed as conspiracy historians. This is a popular designation. It was dreamed up in 1967 by the Central Intelligence Agency. That, at least, is a good revisionist account of the origins of the phrase. But maybe it is merely a conspiratorial account. In either case, I’m willing to run with it.

As with any fringe group in American society, there are various levels of commitment among those who are in some way associated with a particular revisionist interpretation of history. Some people have read a great deal. They may have written something. They may have a website that deals with these issues. In other words, they are historians by avocation. They are probably not employed as history professors because the historical Guild has been screening out revisionist historians ever since the Rockefeller Foundation put up the money for the Council on Foreign Relations to fund an anti-revisionist version of America’s entry into the war. That was in 1946. I talk about this here.

In the summer of 1963, I was employed by a small think tank with a libertarian outlook: the Center for American Studies. It was a later incarnation of the old William Volker Fund. It no longer exists. The man who occupied the office next to mine was a librarian. He had originally studied to be a historian. He studied under the great revisionist historian, Charles C. Tansill, there at Georgetown University. He told me that Tansill had come to him and other grad students and warned them not to get doctorates in history. He knew that they held his views on America’s entry into World War II. He had written a detailed book on this, Back Door to War(1952). As I recall, he told me that Tansill had warned him in 1953. Tansill told him that he would never be able to get tenure at a decent university if the department chairman knew that he shared Tansill’s views on America’s entry into World War II. The man switched his major to library science. He later supervised the creation of Herbert Hoover’s Presidential library in Iowa. His name was Thomas Thalkin. 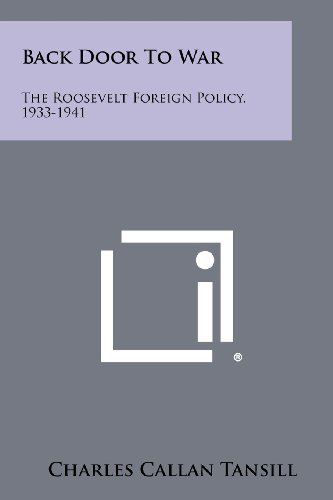 There is a high price to pay for being a revisionist historian. There is a basic law of economics: “When the price is high, less is demanded.” This is why, beginning in the early 1950’s, revisionist historians disappeared. The purge had begun in the late 1940’s, and by the 1950’s, it was in full swing. It was much more rigorous and systematic than the purge of non-Keynesian economists. The screening process was rigorous. It was assumed that virtually no undergraduate would have heard of revisionist history. There were only three tiny publishing houses that publish such works, and only a handful of conservatives knew about these companies: Devin-Adair, Regnery, and Caxton.

With the advent of the web, anybody can start a website. This means that anybody can become a self-appointed expert of some historical event. It doesn’t take a lot of work to do this. It doesn’t take any familiarity with professional standards of evidence. These people have never been trained in historical research. The price is low. Let’s go back to the other side of the rule that I quoted: “When the price is low, more is demanded.”

Conspiracy theories about mass shootings flourish like dandelions in the spring. The sooner they flourish, the less reliable they are. They are based on almost no evidence.

There are these characteristics of conspiracy theories that are widely shared. You need to be aware of them.

1. The conventional “what” is denied. The most stunning example I have ever seen of this is a suggestion that nobody was shot in Las Vegas. It was all faked.2. “Where” is questioned. Probably the best example in recent years is this one: where is the plane that supposedly crashed in Shanksville, Pennsylvania on 9/11? I mean, it’s legitimate to ask this question. It would take a great deal of work to come up with an answer.

3. Then there is “when?” A good example here is this: when did Osama bin Laden die? Conspiracy theorists say that he did not die in Pakistan. He died a decade earlier.

4. Next is “who?” The most famous of all of whom questions Lee Harvey Oswald. The conspiracy historian says it must have been somebody else. A revisionist historian might make the suggestion that Oswald did not act alone. We do not find detailed revisionist books on who exactly the other shooter or shooters were. The same applies to the assassin or assassins of Martin Luther King, Jr.

5. The question of “why” is always the most difficult one to answer for all historians. It is difficult to get inside people’s minds. They usually do not leave written records. Why did Sirhan Sirhan shoot Bobby Kennedy? Nobody seemed to figure out that one. It’s not clear who else may have done it.

6. In the era of online videos, the question of “how” becomes more pressing. How did the supposed pilots of three of the four airliners execute maneuvers to crash into the buildings, especially the one who flew the plane that crashed into the Pentagon? Because this seems impossible, some conspiracy historians have asserted that no plane crashed into the Pentagon. But then what did — a “what” question. Where did the other plane go? Similarly, how did Building 7 collapse on 9/11? No plane hit it. There are lots of “how” questions regarding the collapse of the other two buildings.

When somebody questions almost every official account of everything, you know that he is not a revisionist historian. He is a conspiracy historian. It takes too much work to study any major event in which there may have been a cause that is completely different from the government’s official version.

The Left-Wing PulpitThe Menace of the Progressives