Out of the Ashes

Anthony Esolen, a professor at Thomas More College of the Liberal Arts in Merrimack, New Hampshire and recently of Providence College, Rhode Island, has written a stinging critique of modern education and American society in general titled Out Of The Ashes: Rebuilding American Culture published by Regnery Publishers, 2017.

It’s a short book – 203 pages – but contains much wise social commentary and observations on everything wrong with American education, if there’s any such thing. Esolen is not one to beat around the bush. If you don’t agree with him it isn’t because he is opaque. For instance, chapter one is titled, Giving Things Their Proper Names: The Restoration Of Truth Telling. It is divided into several sections with their own headings, one of which is Are We a World of Liars?

It is almost impossible in the modern world not to accept lies as a matter of course. We are told that a woman can make as good a soldier as a man. Except for the rare amazon, that is a lie”

Most of what he says in the book is glaringly obvious, but it is so seldom spoken or written that it becomes heroic when written or spoken audibly. When referring to teachers who have acquiesced to imparting depravity, he writes: 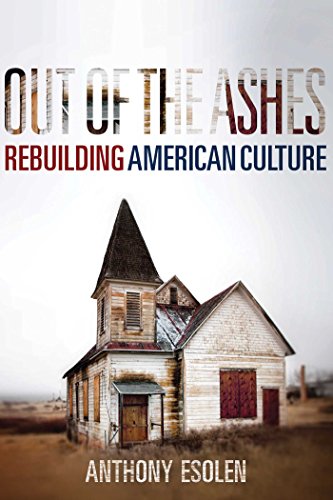 “It will not do merely to restrain them in this or that regard. They are not fit to teach your children the multiplication table. They are not fit to be near them at all. Every moment that your children are in their presence, they will be breathing the putrescent air from the diseased heart and spirit of the instructors, in an institution whose walls stink of it, it has lingered there so long.”

Just a few years ago, in the memory of almost everybody, a statement like,“First let us establish that there are such things as the sexes.” would have met with everybody’s assent. Most people reading it would be wondering why such a thing would need to be established at all. Now such a proposition is not just questionable, it might even be “controversial” or hate speech or some kind of micro aggression.

Esolen is such a hater (maybe even a Neanderthal) that he writes:

“We are taught from the time we enter the indoctrination centers that the only differences between men and women are trivial matters of plumbing. It is not true.

When the European missionaries came to the new world to evangelize the natives, they did not find creatures of a different species. They found human beings, male and female. They did not find any tribes in which the women met in council, hunted the large animals, smoked the peace pipe, trained up their daughters in savage displays of physical courage and endurance (the “sun dance” of the Plains Indians, for example) and established elaborate hierarchies of honor. They did not find any tribes in which the men took care of small children, gathered roots and berries, made themselves up with pretty decorations to delight their women … and made “nests,” as it were, as clean and neat as possible, for the sake of the little ones, and because that is the way they liked things best.

They found men and women. That is what you will find wherever you go in the world.”

I can’t disagree with any of his assessments about the shipwreck of the schools or his suggested remedies. The one thing I think is absolutely essential that isn’t mentioned and is never mentioned by anybody in the reformist camp is the necessity of prohibiting government involvement of any kind in schooling or anything else having to do with forming thoughts, opinions or beliefs. No matter who is in charge, be it Aristotle, Pythagoras, Isaac Newton or Erasmus, they won’t always be in charge, and the forces of coercion will always seek control. All compulsion should be eliminated. Certainly there will be parents that don’t send their children to school or teach them themselves, but there always have been and always will be unfit parents. Compulsory schooling has always been about teaching children the “right” things, not about education.

This is a book that will be appreciated by anybody interested in the social, cultural, educational and intellectual collapse of society and its possible remedy.

The Best of Chris Sullivan

Chris Sullivan [send him mail] owns a welding shop in Atlanta, Georgia and is currently working on design of exercise equipment. Visit his blog.

Previous article by Chris Sullivan: The Fog of War