Federal Courts Say Foreigners, Not US Citizens, Are Entitled To Due Process

The US Constitution applies to US citizens, and the amendments known as the Bill of Rights guarantee due process as a protection of US citizens’ civil liberties. That’s the theory but not the practice.

Trump’s travel ban applies to non-US citizens, primarily to refugees from the Bush/Obama bombings of numerous Muslim countries. Some of these refugees, whose families and countries were destroyed by American troops, could harbor feelings of revenge against Americans. The Ninth Circuit Panel’s injunction against Trump’s executive order gives the Constitution’s protection of US citizens to non-citizens, apparently on the basis of due process and religious discrimination arguments. The panel of judges said that Trump’s executive order “runs contrary to the fundamental structure of our constitutional democracy.”

So too does bombing numerous Muslim countries over the course of the past 16 years, about which nothing has been done. One would think that with the Democratic Party’s merger with Identity Politics and with the liberal/progressive/left leaning of the Ninth Circuit, more of a stink would have been raised about bombing Muslims gratuitously than by placing a mere ban on their entry into the US. But it all depends on who does the bombing and who does the ban. Identity Politics requires “America’s First Black President” to be supported at all costs, and Trump, a white heterosexual male billionaire, to be hated at all costs.

Dear readers note that the US federal courts roll out the Constitution in order to protect non-citizens from a president’s executive order preventing their entry into the US, but refused to protect the constitutional rights of American citizens from arbitrary indefinite detention and execution without due process.

The fact that constitutional rights no longer apply to citizens, only to non-citizens has evoked no comment from the liberal/progressive/left, from the Democratic Party, from Harvard Law School, from the American Bar Association, or from the Federalist Society. Not from anyone, and for my reward for telling the truth Harvard University Library has published a large list of “False, Misleading, Clickbait-y, and Satirical ‘News’ Sources” on which paulcraigroberts.org is included.

Americans, and apparently Harvard’s library, are unaware that hardly any of the experts who have chosen to speak out about the official 9/11 story, including those First Responders inside the two towers, believe a word of the official story. Harvard’s librarians are apparently so ill-read that they are unfamiliar with books by the 9/11 Commission’s chairman, vice chairman and legal counsel, who wrote that information was withheld from the 9/11 Commission and that the Commission was “set up to fail.” Harvard’s librarian is apparently unfamiliar with the testimony of demolition experts that the buildings came down as a result of controlled demolition. Harvard’s librarian is apparently ignorant of the panel of scientists headed by a University of Copenhagen nano-chemist who reported finding both reacted and unreacted nano-thermite in the dust of the twin towers and who offered their samples for confirmation by other scientists.

Harvard University has no interest in truth. Harvard’s sole interest is to remain a member of the Ruling Establishment. As that requires telling lies, Harvard will tell lies. Lies bring Harvard riches, making Harvard so rich that, as Ron Unz argues, Harvard does not need to charge tuition and does so only out of greed.

Decades ago my University of California, Berkeley, economics professor became Dean of Arts and Sciences at Harvard. My term paper for the course had been published in the prestigious journal, Classica et Medievalia. Years later when he learned that my book, The Supply-Side Revolution, had passed the peer-review process of Harvard University Press and was slated for publication, he sent for me.

He said that he wanted to have me appointed to the Harvard economics faculty because the university’s belief in econometrics had proven false and the economics faculty needed a broad-based person such as myself to bring the subject back to life in the real world. I wished him good luck and wondered how a dean this naive had survived at Harvard.

For the dean at Harvard, my work was a strong point. I was the first to explain the Soviet economy both as an organizational system and in terms of the original Marxist aspirations. I had reformulated the Pirenne Thesis, and my reformulation had been included into reading texts used in courses in medieval history and urban economics. I had produced new insights into economic policy and had identified regulation as a factor of production. My macroeconomic contributions had corrected the Keynesian deficiencies and extended the role of relative prices into macroeconomics. This seminal work had passed the peer-review process of Harvard University Press and resulted in the publication of my book, The Supply-Side Revolution, recently republished in the Chinese language in China, but still derided by American ignoramuses as “trickle-down economics.” 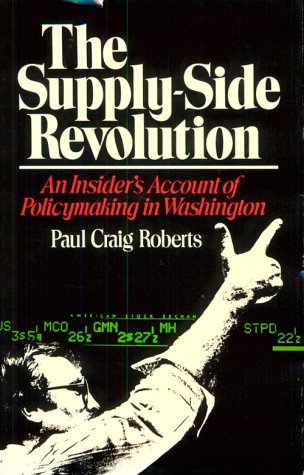 Harvard University Press kept The Supply-Side Revolution in print for decades. Despite this fact, even people I highly respect, such as Michael Hudson and Lewis Lapham, have no idea what supply-side economics is about and misrepresent it as some kind of preferment for the rich, which shows the power of the Establishment to control the understanding of even highly intelligent people.

To get back to the story. My appointment to Harvard’s economic faculty was blocked by the economic department’s resistance on the basis that I was too disruptive of the orthodoxy. Me and Michael Hudson.

The orthodoxy has a large investment in human capital in protecting the rights of the one percent to plunder the rest of us. Those academics who support this plunder are the ones who prosper in the American academy, just as the presstitutes who lie for a living do in the American media.

So here I am, a peer-reviewed and published Harvard University Press author and peer-reviewed Oxford University Press author, whose books are now available in Chinese (2), Russian, German (3), Czech, Turkish, French, Spanish (2) and Korean, a person who has held the highest security clearances and once had subpoena power over the CIA, who has the French Legion of Honor, who has the US Treasury’s Silver Medal, who has letters of thanks from President Reagan for my contributions to US economic policy, who is asked to speak all over the world, who was Senior Research Fellow, Hoover Institution, Stanford University for decades, the William E. Simon Chair in Political Economy, Center for Strategic and International Studies, Georgetown University for 12 years, Assistant Secretary of the U.S. Treasury, Associate Editor of the Wall Street Journal, columnist for Business Week and the Scripp Howard News Service, etc., and so on, and some dumbshit at the Harvard library posts a list that says I am a suspect source of information.

This is the world we live in. Even the most prestigious institutions are utterly corrupt. No one is there for the American people or for truth, or for anything or anyone except the One Percent. Americans are shot down in the streets, whites along with blacks, by militarized police trained to see the people who pay their salaries as enemies. Muslims are bombed into the stone age. Reformist Latin American governments are routinely overthrown. European countries are intimidated, bribed, and reduced to vassal status. Aggression is displayed toward Russia, China, and Iran. America has become a great collection of evil. The good in the country is voiceless and without power. Evil rules us.

This is why this site is important. If you do not support it, you are bringing about your own demise.

I don’t have to write. My writing brings me insults from narcissistic ignorant egomaniacs, puts me on black lists, makes overseas travel difficult, and possibly negatively impacts my relatives. The United States has devolved into a police state where truth is “the enemy of the state,” which makes me suspect. Why should I write without your support? If you aren’t willing to support the fight, for whom am I writing?