EXCLUSIVE: How Jimmy Stewart's Agony in It's a Wonderful Life Came From Extreme PTSD He Suffered After he Lost 130 of His Men as Bomber Pilot in WWII

Jimmy Stewart suffered such extreme PTSD after being a bomber pilot in World War II that he acted out his mental distress during ‘It’s a Wonderful Life’.

Stewart played George Bailey in the classic movie and channeled his anger and guilt into the scenes where he rages at his family.

Stewart was haunted by ‘a thousand black memories’ from his time as an Air Force commanding officer that he took with him back to Hollywood after the war.

Pilots who flew with him said that became ‘Flak Happy’ during World War II, a term to describe what is now known as Post Traumatic Stress Disorder, or PTSD.

Stewart wrestled with the guilt of killing civilians in bomb raids over France and Germany including one instance where they destroyed the wrong city by mistake. 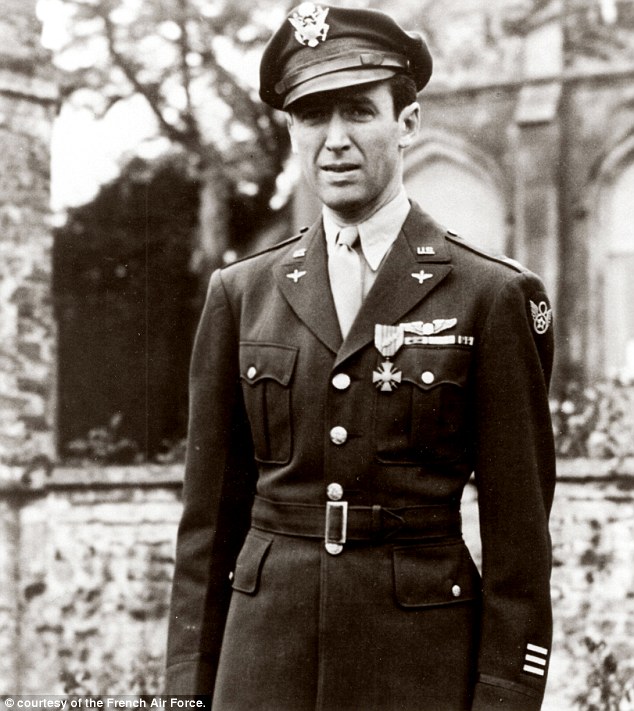 Actor Jimmy Stewart, pictured in 1945 after World War II combat ended, was haunted by his memories from his time in the Air Force

Stewart felt responsible for the death of his men and especially one bloodbath where he lost 13 planes containing 130 men who he knew well.

Stewart’s anguish is laid bare for the first time in author Robert Matzen’s Mission: Jimmy Stewart and the fight for Europe, published by Paladin Communications.

Stewart never spoke  about it, even to other veterans, and bottled up his emotions that came out in the acting parts he chose when he returned to Hollywood.

He acted it out during It’s a Wonderful Life, where character George Bailey unravels in front of his family – the emotional core of the film after a lifetime of setbacks, including being unable to go to war while his brother becomes a decorated hero.

Films like Shenandoah and Winchester 73 allowed Stewart to explore his dark side which was never there before he went to war.

Growing up in Indiana, Pennsylvania, he got into acting while in school and was given a contract by MGM in 1935 which led to him starring Philadelphia Story in 1940, for which he won the Oscar.