Trumped! Washington’s Fiscal Hypocrisy Is Too Rich For Words

You have to love it when one of Donald Trump’s wild pitches sends the beltway hypocrites into high dudgeon. But his rumination about negotiating a discount on the Federal debt was priceless.

No sooner did the unschooled Trump mention out loud what is already the official policy of the US government than a beltway chorus of fiscal house wreckers commenced screaming like banshees about the sanctity of Uncle Sam’s credit promises.

Let’s see. For 89 months now the Federal Reserve has pounded interest rates to the zero bound because come hell or high water the US economy must have 2% inflation in order to grow and prosper. Other than a handful of rubes from the Congressional hinterlands, there is nary a Washington operative from either party who has questioned the appropriateness or effectiveness, let alone the sanity, of Bernanke-Yellen’s 2% inflation totem.

That means, of course, exactly 30 years from today investors would get back 54.5 cents in inflation-adjusted money per dollar of principal on 30-year treasury bonds if the Fed hits its sacred targets.

If that’s not default, it is surely a deeper “discount” than even the Donald had in mind while jabbering to CNBC about his years as the King of Debt.

Oh, yes, the monetary geniuses who peddle the 2% inflation gospel claim we are all in it together. That is, prices, wages, profits, rents and even indexed social benefits allegedly all march upwards at 2% per year, and, save for minor leads and lags in timing, no one is financially worse for the wear.

C’mon. That’s rank poppycock. The truth is, savers get killed and borrowers get windfalls; the wages of upper-end workers keep up, while the purchasing power of paychecks lower down the ladder shrinks continuously; social security recipients get recompense, private pensioners get shafted. Yada, yada.

Moreover, the biggest windfall harvesters of the Fed’s deliberate debt default policy are the leveraged gamblers of Wall Street and the clueless debt-addicted politicians of Washington.

Even if you grant that the latter have no inkling that the savings function is the key to capitalist prosperity, they do spend a goodly amounted of time waxing about their endless affection for America’s working people. Why Governor Kasich never finished a single GOP primary debate without claiming he understood how to improve the US economy because he father was a mailman.

So take a look at the graph below on real wages since the Fed went full tilt with the printing press in 2007. This is not a picture of 2% lockstep.

Less educated and lower wage workers have experienced shrinking real wages and for a self-evident reason. On the margin, they are more exposed to the lower nominal wages of foreign goods and services competitors than are workers on the upper end of the jobs and income ladder.

Indeed, 2% inflation is the very opposite of the Keynesian lockstep claim. It’s incidence among economic agents and classes are actually capricious and inequitable in the extreme.

In fact, it is a grand policy scheme of random monetary default. But since the Donald had the temerity to broach the topic—whether by inadvertence or by purpose—–the spendthrifts of the Imperial City are now scrambling to smother us in a verbal blanket of phony fiscal rectitude. 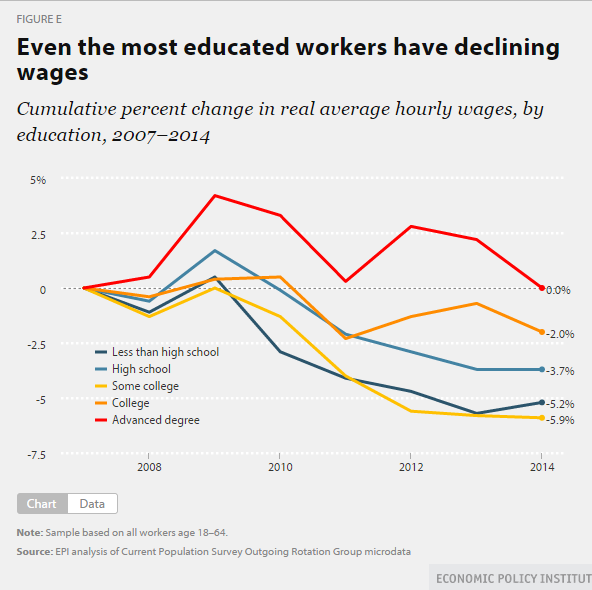 In that regard, there are few more noxious precincts of statist fiscal hypocrisy than that occupied by the ranks of scribblers and bloviators at Politico.

By the lights of these folks, everything that has been done in the Imperial City these last several decades should have been done. Certainly, there is no fiscal crisis that might warrant radical ideas like those proffered by Trump.

Why Obama, the Fed and the Congress actually saved the country from Great Depression 2.0 in 2008-2009. Since then, in fact, we have been marching resolutely toward economic recovery and fiscal stabilization.

No, not even close. There has been no meaningful economic recovery and the fiscal condition of the nation is frightful.

As to the former, there are still fewer full-time, full-pay “breadwinner” jobs than before the crisis. Likewise, the median household’s real income is still far lower than when the previous Clinton was shuffling out of the White House In January 2001.

But among all of the beltway can’t, nothing is more grating than the economic policy architects of the Obama White House taking to the pages of Politico to scold Trump about fiscal responsibility.

These people have no shame. And among them, there are few Washington apparatchiks more culpable than Gene Sperling, who headed Obama’s economic policy council.

To wit, between December 2008 and the present, the public debt exploded from $10.7 trillion to $19.4 trillion. That means that on Obama’s watch, and with Sperling’s presumptive advice, the new public debt was issued equal to80% of the total debt created during the entire prior 220 years of the republic and the tenure of 43 Presidents!

That’s right. The Obama White House has indulged in fiscal profligacy like never before, yet this cat has the audacity to unload a self-righteous sermon on the sanctity of Washington’s credit:

“……(Trump has no) sense of the economic and historical importance of America maintaining an iron-clad commitment to stand by its word on our national debt……… U.S. Treasury obligations are the least risky financial asset on the planet and the benchmark against which the price of all other financial assets is set……(not).even the slightest awareness from Trump that he that he might be playing with economic fire because if Treasuries were seen as no longer risk-free that would shake to its very foundations literally the core assumption of global financial markets, meaning that the interest rate on every other financial asset—mortgages, car loans, credit for businesses large and small—could go up perhaps by a lot.

Well now. Has Sperling and his ilk ever considered how high-interest rates might actually be—-save for the massive bond market fraud carried out by the Fed and the rest of the world’s central banks?

Even the supposedly economically benighted types among us, apparently Donald Trump included, know that neither Washington, the IMF or the G-20 has repealed the law of supply and demand. Nor has the CIA yet classified as a state secret the amount of sovereign debt and other financial assets that the central banks of the world have vacuumed up in the name of monetary “stimulus” over the past two decades.

The fact is, about $19 trillion—–including more than half of the publicly traded US Treasury securities—– has been sequestered in central bank vaults since the mid-1990s. All of that debt would have otherwise massively burdened the world’s limited supply of real savings from income, thereby causing interest rates to soar. Instead, it was made to disappear from the market circulation by monetary authorities hitting the “buy” key on their digital printing presses. And the Bushbama enablement of this giant backdoor form of default on honest debt via the appointment of avowed Keynesian money printers to the Fed isn’t the half of it. Whenever a corporal’s guard of Capitol Hill fiscal antediluvians has tried to stop the government spending machine by refusing to raise the Federal debt ceiling, their beltway bettors have cried “full faith and credit”, knowing that the Fed and its front-running Wall Street punters would buy-up the flood of new treasury paper.

In this vein, Sperling recommended that Trump gets himself educated by attending “Hamilton” next time he visits Broadway and remonstrating pedantically about how “generations of Americans have benefited from a historical commitment started by Alexander Hamilton to ensure the full faith and credit of the U.S. is rock solid”.

He then lobbed in a self-justifying stink bomb by suggesting Trump is utterly bereft of the wisdom and courage displayed by the Obama White House when it starred down the 2011 debt ceiling challenge of GOP backbenchers. Said Obama’s former chief fiscal strategist,

Imagine if we were in the middle of another debt limit stalemate like we had in 2011 (when I was watching from the White House, as director of the National Economic Council) and a President Trump told the world—or repeated to the world—that since the budget turmoil might be making U.S. debt looked shaky, he was open to buying back debt at a discount and was instructing his secretary of the Treasury to consider such options? What if he then went on for days confusing markets as to his true intentions while dropping lines about being the “King of Debt,” “playing poker” or “printing money?” Does anyone doubt that even without any congressional action such Trumpisms could lead to a global panic with unknown economic harm to the global economy and the long-term economic reputation of the United States?

Well, here’s what really happened. Roughly 80% of Federal spending consists of transfer payments, debt service and other essentially locked-in commitments under law. The debt ceiling is the only frail reed by which the inexorable expansion of this fiscal doomsday machine can be arrested.

So when the “full faith and credit” chest-thumpers on both ends of Pennsylvania Avenue quashed the backbench uprising in August 2011, they ensured that Washington’s actual march toward default would continue unabated.

In fact, total government transfer benefits have grown from $1 trillion per year at the turn of the century to $2.7 trillion at present. Even then, the baby boom bulge driving this budget breakout is just getting up its demographic head of steam. During the next 15 years, the entitlement tsunami will truly become a fiscal doomsday machine.

Indeed, while the Sperlings of the beltway have been harrumphing about full faith and credit and the sanctity of the humongous debts that they are piling on to generations born and unborn, the  doomsday equation is shown in the graph below has been permitted to run its course unmolested by Washington’s supposed fiscal watchmen.

To wit, since the turn of the century government transfer payments have been growing at approximately 2X the rate of wage and salary growth. Just how long do this genius think this trend can be maintained?

But not to worry. We will grow our way out of it. As we indicated last week, Imperial Washington’s official fiscal scorekeeper, the Congressional Budget Office (CBO), has deemed in its Keynesian wisdom that the business cycle has officially been vanquished and that the US economy will enter the nirvana of Full-Employment at Potential GDP sometime next year.

Not only that. It will remain there for the time ever more, the world without end. By the time we get to 2026 we will have had 207 straight months without a recession according to the CBO.

Yes, that’s what the full faith and credit brigade swears by.  Even then, however, the budget deficit will hit $1.3 trillion and 5% of GDP by 2026 under current policy.

Imagine what will happen in the real world when the Red Ponzi finally crumbles in China and the global economy plunges into a prolonged deflationary recession?

Needless to say, Sperling has left the White House and is now out humping for Hillary, who promises to lower the Medicare age to 50 years and distribute a goodly amount of other free stuff from Bernie’s playbook.

Alas, the fiscal menace at loose in the land long pre-dated Donald Trump.

In fact, it’s precisely apparatchiks like Sperling and pols like Hillary whose policies have paved the way for his improbable rise. And just in the nick of time.

Previous article by David Stockman: The Frogs Are Boiling Again

Shame on the Supreme Creeps They’re Fat and Fragile