As even CBS notes, according to UNICEF, which is probably the source of Sanders’s factoid, the US has lower childhood poverty rates than Greece, Spain, Mexico, Latvia, and Israel, all of which are OECD countries or regarded as peer countries. The US rate (32.2 percent) is also more or less equal to the rate in Turkey, Romania, Lithuania, and Iceland. See page 8 of this report.

So, while Sanders probably doesn’t even know what he means by “major country” it’s clear that the US is not an outlier among OECD-type countries, even by UNICEF’s own analysis.

We get much more insight, though, once we have a look at what UNICEF means by “poverty rate.” In this case, UNICEF (and many other organizations) measure the poverty rate as a percentage of the national median household income. UNICEF uses 60% of median as the cut off. So, if you’re in Portugal, and your household earns under 60% of the median income in Portugal, you are poor. If you are in the US and you earn under 60% of the US median income, then you are also poor.

Here are all the median incomes (according to the OECD’s household income comparison statistic called “median disposable income.”) When adjusted for purchasing power parity, the statistic allows us to make incomes comparable across countries that use different currencies and have different costs of living. This takes into account taxes, and social benefits paid to households. So, let’s use it to compare (the Y axis is in “international dollars”): 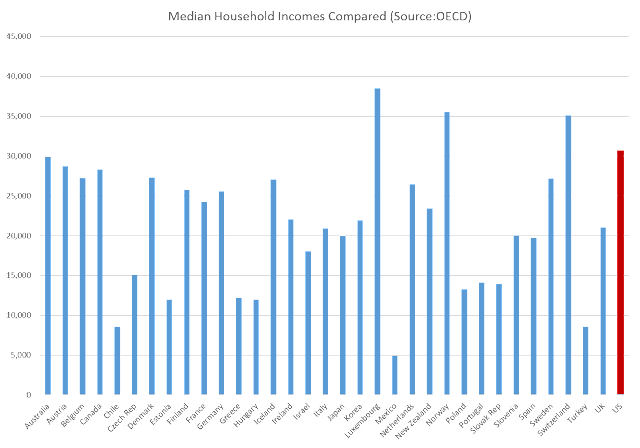 We see immediately that income is higher for US households than most of the other countries. What about that high poverty rate, though? Well, we find that the poverty level in the US is still higher than numerous countries’ median income level: 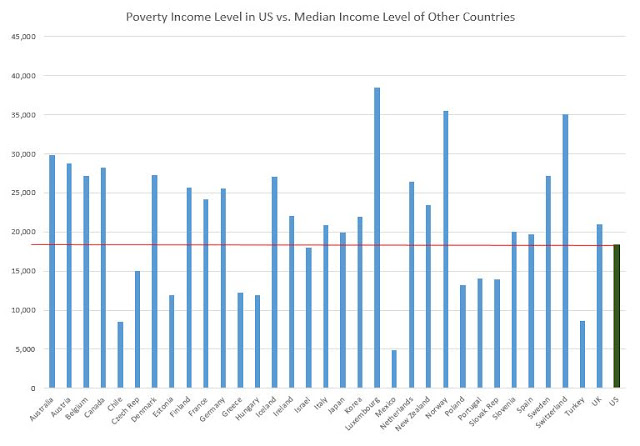 The green bar is the US income at poverty levels. So, this tells us that a person at 60% of median  income in the US still has a larger income than the median household in Chile, Czech Rep., Greece, Hungary, Portugal, and several others. And the poverty income in the US is very close to matching the median income in Italy, Japan, Spain, and the UK.

Keep in mind that we’re using median income here, and not GDP per capita, which means this isn’t being skewed up by a small number of mega-wealthy households. So while the US may have a rather high poverty rate, we find that being poor in the US is similar to (at least in terms of income) being a median household in many other countries, including the UK and Japan. 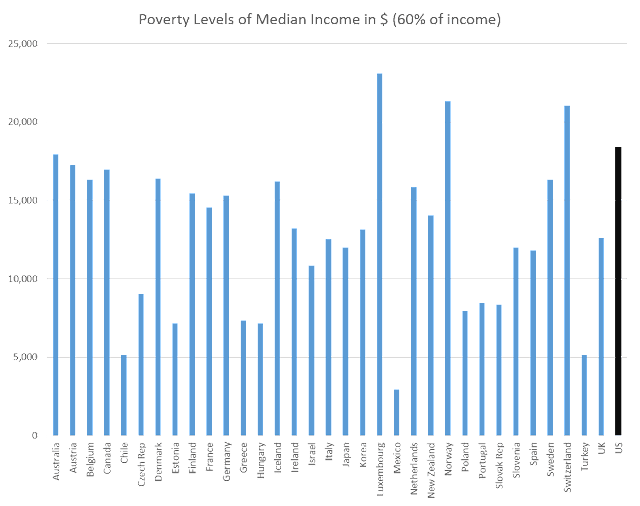 The relationships between the countries are the same as in the first graph, but the income levels are all lower. But again, here we see that the median incomes for people at poverty levels are higher in the US than in other countries.

Thus, the fact that the US has higher poverty rates says very little about the actual living standards of the poor. The poor have higher incomes in the US in real terms in most cases. The countries that should really give us concern are the countries that have high levels of poverty and low median incomes. In this graph, we see childhood poverty levels (on y axis, according to the UNICEF report) compared with income levels for those below 60% of median (x axis, according to the OECD): 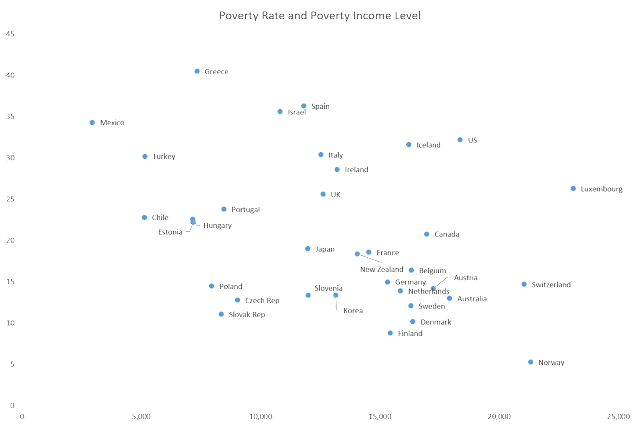 The countries in the top left side of graph — Greece, Mexico, Israel, Spain, Italy, Ireland, UK, and Portugal  — are the ones that have the least to offer the poor. These are countries with low median income and even lower incomes for the poor (of course). Those countries with high incomes — such as the US, Switzerland, Norway, and Australia — have much higher incomes. So while there are more poor in the US (relatively speaking) the incomes of those poor are much higher in the US, and even higher than the median income of other countries in many cases. In other words, even if the poverty rate in Greece were zero percent, all those non-poor median Greek households would be poorer than a US household at the poverty line.

Also, given that the OECD’s measure here attempts to take into account income from social benefits, we can’t just say “well, those European incomes may be lower, but they get more in social benefits.” That is not true for these numbers. Social benefits included, Americans have higher incomes at both the median level and at the poverty level, when compared to most other countries.

This further illustrates the problem with speaking about poverty in terms of percentages of the median or as a percentage of total wealth. These comparisons are used to highlight inequality, but the fact is that the US (which has more inequality) offers higher incomes for those at poverty level. Is it better to be equal in Portugal or unequal in the US? One can be “equal” in Portugal, but it will mean a standard of living well below that which can be attained in the US at poverty levels.

Note on the OECD numbers: the median disposable-income numbers are found here at the OECD stats web site.  They are then divided by the PPP conversion factor for private consumption found here. Wikipedia has also already done this calculation and listed the values here.

It’s difficult to find median income numbers that can be compared across different countries, but for a second source, we can consult the Gallup survey data. Gallup has compiled its own data on median incomes based on self-reported household income from all sources. So, theoretically, this would include social benefits payments as well. The numbers here are higher than the OECD numbers because they do not appear to take into account the impact of taxes. So, without taxes factored in, the high-tax Scandinavian countries, for example, look wealthier in this comparison than they do in the OECD comparison. Nevertheless, there are some similarities overall: In this case, the US median income is still higher than most countries in the group, but while the US ranked 4th place in the OECD survey, it ranks 6th place here. (Switzerland, oddly, is not included in the Gallup survey.)

If we reduce the US to 60% of its median level, and leave the rest alone, we find that the US, at poverty level, still comes in above or roughly equal to 15 other countries in the group. So, by this measure too, the poverty level in the US beats the median level in numerous European countries. 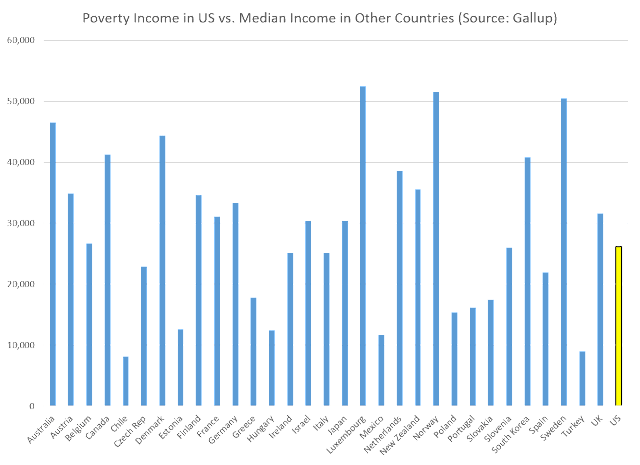 Modernity Hiding the Civilian Victims of US Wars