*NYSE SUSPENDS TRADING IN ALL SECURITIES

The market outage has stretched to two hours. Official say a cyber-attack is not to blame.

“Trader on the floor of the exchange in lower Manhattan, who spoke on the condition of anonymity, said that after the suspension began, traders were told that the problem was related to updated software that was rolled out before markets opened on Wednesday.

According to the trader, the exchange said that the new software caused problems soon after trading began on Wednesday and the exchange decided to shut down trading all together to fix the problem.” 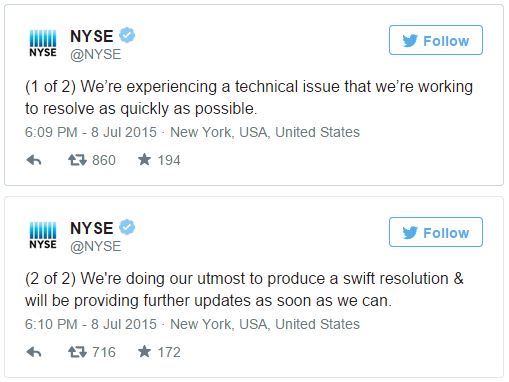 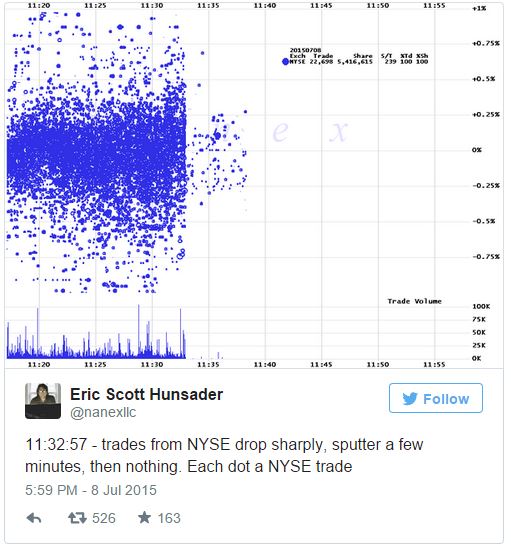 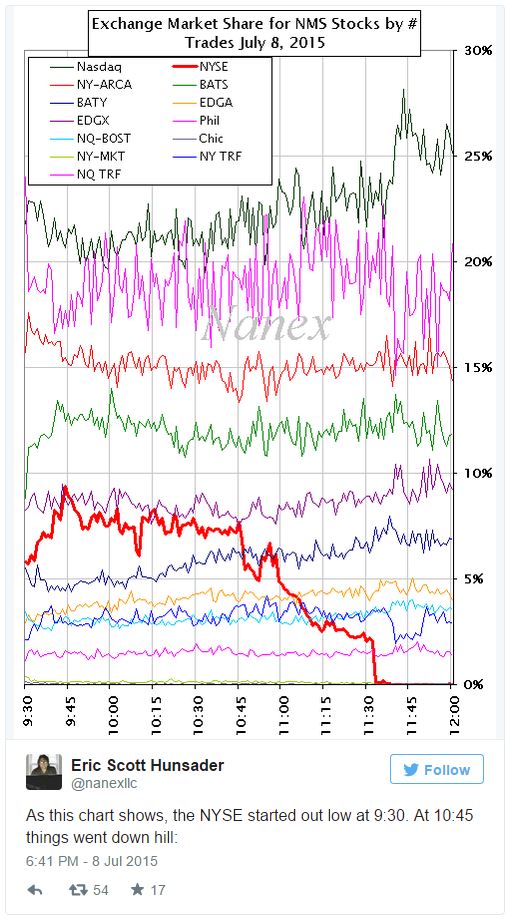 And CNBC was stunned…

Rather hilariously, CNBC just could not comprehend this “broken market”… which happens multiple times a week…

And asked “what should the retail trader at home do?”

Prophetically, we wrote about precisely this one year ago when we documented the hilarious case of “social-network” stock CYNK.  This is what we said then:

For all the drama and comedy surrounding the epic idiocy in which a bunch of “investors” took the price of non-existent company CYNK from essentially zero to a market cap of over $5 billion in under a week, most people missed the key message here: the stock is a harbinger of what is happening to the entire market. Because while those defending what is clear irrational exuberance, scratch that, irrational idiocy are quick to point out that CYNK’s epic surge took place on less than 0.1% of its outstanding shares, these are the same people to say precisely the opposite about the S&P 500. “Ignore the collapsing volumes sending the stock market to all time high – it’s perfectly normal” is an often repeated refrain by the permabullish crowd. Just not when it involves case studies in market insanity like CYNK apparently.

Perhaps ironically, it was the concurrent most recent crisis in Europe, that involving Portugal’s cryptic Espirito Santo group, whose top-most HoldCo is largely shrouded in secrecy yet which somehow is not a deterrent to the sellside community to issue one after another “all is clear; don’t pull your deposits please” note, that confirmed not only that nobody has any idea what the real situation of European banks is, but how the entire capital market has now become nothing more than one glorified CYNK penny-stock turning into a mid-cap.

Deutsche Bank’s Jim Reid explains: “Whatever one feels about financials and the wider financial system, credit markets did arguably get a small glimpse of what things will be like when this cycle does actually end as the structurally impaired liquidity that exists in credit caused a small amount of panic yesterday morning before markets recovered in the European afternoon session. Liquidity is really poor in credit these days which doesn’t matter when markets are in buy only mode as they have been for many quarters now, but it does matter on the days when you get a negative story.”

In other words, just like the CEO of CYNK who promptly “made” a few billion in paper profits, it feels great to “make” money on virtually no volume. The problem arises when one tries to cash out of paper and into all too real profits.

The White House and the U.S. Treasury Department are monitoring the “ongoing issue” at the New York Stock Exchange and President Barack Obama has been briefed on the matter, a White House official said on Wednesday.

The NYSE Group, which includes the New York Stock Exchange, has suspended trading in all securities because of technical difficulties.

Which ironic because CNBC is discussing whether this is “a success or failure” and states that “if retail investors want low cost liquid trading then they have to learn to live with this.”

Convert Bad Fat into GoodTear Down That Monument