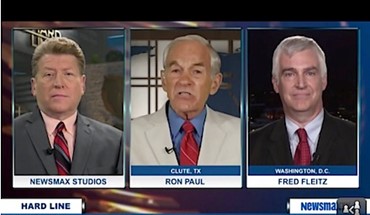 On the Iran talks, Dr. Paul reminded the viewers that Reagan believed it was important to talk to the Soviets, a regime that had killed far more people than has the Iranians, and to look for ways to reduce weapons proliferation. So why not talk to Iran?

Former CIA operative Fred Fleitz, now head of policy at the neoconservative Center for Security Policy, unsurprisingly disagreed, stating that he has no idea what Ron Paul is talking about. The Iran deal is a “catastrophe” that “could lead to a huge regional war in the Middle East.” He’s all for talking to Iran, he claimed, but only to get a good deal.

When Dr. Paul pointed out that Iran has never been found in violation of the Non-Proliferation Treaty, Fleitz (mistakenly) blurted out “that’s not true!”

Watch as a few sparks fly in this very interesting interview available here.

Was WWII the Good War?Does The Fall Justify Government?