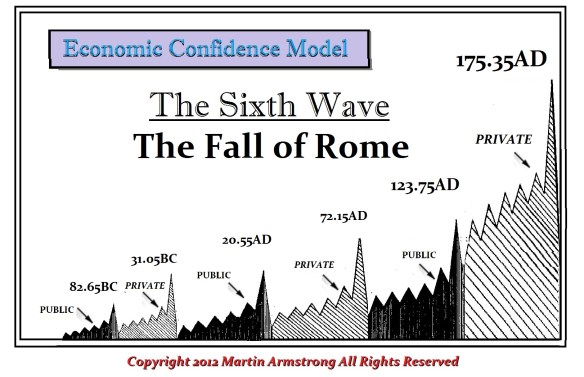 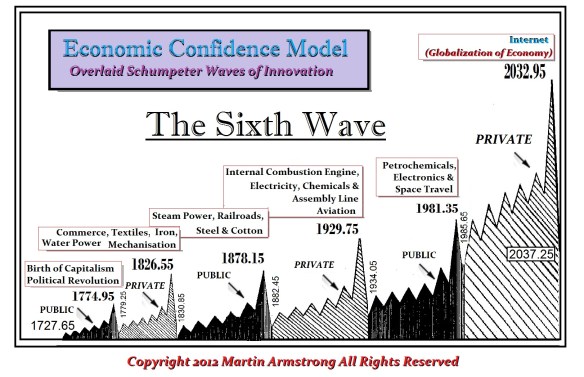 QUESTION: Marty, I remember you displaying a chart on the fall of Rome and the ECM. Do you have that one to show again? 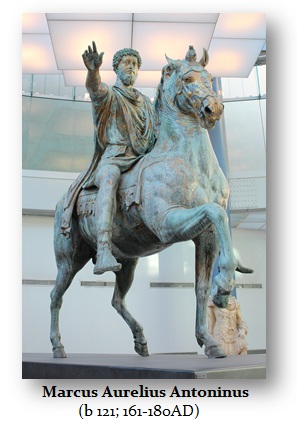 ANSWER: Here is that chart. The last Sixth Wave marked the peak in the Roman Empire. Every historian has drawn the line to mark the beginning of the Fall of Rome took place with the death of Marcus Aurelius in 180AD. Talk about almost getting to a new age, he sent an ambassador to China. This has been revealed by books from the Tang Dynasty. The East and West knew each other. Merchants ran the trade routes. This would have been the beginning of a major global economy back in 180AD.

Marcus’ death ended the golden age and expansion of the world economy. He was followed by his crazy son Commodus. With the death of Commodus, the Praetorian Guard actually auctioned off the position of emperor to the highest bidder. Since he was just nuts, they got to rule Rome and it went to the heads to the point corruption was in the open.

I have told the story how I use to meet with people who wanted to run for President at the behest of those in the Republican Party. Then in 1999, I was asked to fly down to Texas to meet with George Bush, Jr. I was told that this was different. They had me meet with various potential candidates to vet them out and give my opinion if they could handle the job from understanding the global economy. So what was different with Bush, Jr., was the fact they told me he was “stupid”. I was shocked. I asked why would you want to make someone stupid president? I was told he had the “name”. That is when they asked me to be the chief economist in the White House. I declined for our business was way too global for that. They told me the plan was to surround him with good people, That is how Cheney took the role of President and moved his office in the White House.

I have been told similar traits with Obama. He was told they would let him play with the social stuff, but leave everything else to them. The bureaucracy tasted power under Bush and they were not about to let that go. Obama misses more than 60% of his daily security briefings. This is the Praetorian Guard running the world. 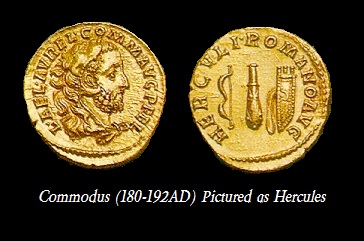 In this respect, all the traits of corruption exist and are in place. We have the absolute worst political leaders in place and they function more like a game show host. Nothing is real and it certainly is not exposed by the press who is also bought and paid for. When Commodus took power, he saw himself as the reincarnation of Hercules. He was insane and had himself portrayed on his coins as Hercules. Can you imagine what the general population must of thought of him at the time? Obviously, the bureaucrats were running everything just as Dick Cheney.

Previous article by Martin Armstrong: The Superiority of Arranged Marriages

Jim Rogers: Russia Is a Buy The First Map To Show America