Here I do not refer to Frederic Bastiat’s classic work, but the law as understood in mediaeval times after and absent Rome, and before development of anything even modestly resembling today’s nation-state.

He begins by contrasting this historic law with what is defined as law today:

For us law needs only one attribute in order to give it validity; it must, directly or indirectly, be sanctioned by the State.  But in the Middle Ages, different attributes altogether were 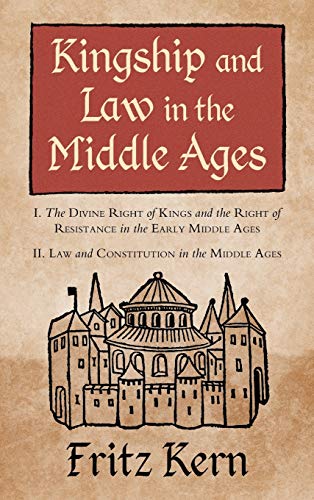 essential; mediaeval law must be “old” law and must be “good” law….If law were not old and good law, it was not law at all, even though it were formally enacted by the State.

Consider how pathetic our society would seem to someone coming from this past time that Kern describes.  He comes from a place that held that law was grounded in something more than the whims of the king.  He comes to a place where law is defined as anything goes.  And he sees a society beholden to this.

This mediaeval time traveler looks back to his time, and considers that for law to be law, it must be “old”:

Law was in fact custom.  Immemorial usage, testified to by the eldest and most credible people; the leges patrum, sometime but not necessarily proven by external aids to memory, such as charters, boundaries, law-books, or anything else that outlived human beings: this was objective law.  And if any particular subjective right was in dispute, the fact that it was in harmony with an ancient custom had much the same importance as would be given today to the fact that it was derived from a valid law of the State.

Further, he considers that the law to be law must be “good”:

Where we moderns have erected three separate alters, to Law, to Politics, and to Conscience, and have sacrificed to each of them as sovereign godheads, for the mediaeval mind the goddess of Justice is enthroned, with only God and Faith above her, and no one beside her.

The mediaeval mind did not separate justice from law – the law was to serve no other purpose, no other objective, no other god.

The law, in its majestic, inviolate simplicity, seemed to the people to be one great whole, which like Righteousness, was “God’s handmaid,” “giving to everyone what is his own.”

Giving to everyone what is his own.  A novel concept.  The monarch remained free to bestow privileges…

Consider the simplicity and justice of this moral sentiment.

As an example of an old custom that was not good – therefore not “law”, consider slavery: this was certainly old – it predated mediaeval times by countless centuries.  To the mediaeval mind, this was not sufficient to make such a custom valid.  Such custom was old, but not good.  The “laws” were born in force and unjust power.  They were custom, but unlawful.

The law, on the other hand, was always there, either discovered or waiting to be discovered.  That bad practice at times overtook the law does not change or replace the underlying “good” law.  This did not require a new law – law was not new, it was old.  It only required the discovery of the law – discovery in its most simple and direct sense; something that previously exists, waiting to be found.  “The old law is the true law, and the true law is the old law.”  One cannot be separated from the other.

In contrast, Kern offers further views on the law as it is today:

For us, the actually valid or positive law is not immoral but amoral; its origin is not in conscience, God, nature, ideals, ideas, equity or the like, but simply in the will of the State, and its sanction is the coercive power of the State.  On the other hand, the State for us is something holier than for mediaeval people….

What a miserable concept.

For us, the heirs of scholastic jurisprudence, law is only secondary; the State is primary.  To the Middle Ages, law was an end in itself, because the term “law” stood at one and the same time for moral sentiment, the spiritual basis of human society, for the Good, and therefore for the axiomatic basis of the State.  For the Middle Ages, therefore, the law is primary, and the State only secondary….the State exists for the law and through the law, not the law through the State.

By this time, our time traveler must be rolling his eyes, wondering what mysterious potion has overtaken this pathetic society.  He is not naïve – he knows that the law was not held perfectly in his time, that there were abuses and attempted abuses that required a man to stand – recall the opponent of King Clovis.

However, in his time, man was not fooled.  That there were abuses did not change respect for the theory and objective of maintaining and discovering “old” and “good” law – one was not branded criminal for disobeying an unjust law.  In fact, one had duty to do exactly this.  Even the king could not directly challenge one so inclined to protect the law as he saw it.

How was this old and good law to be recognized?  If it was unwritten – to be discovered, to be interpreted and defended by each individual, where both king and people were held below it – where was it to be found?

…in the second place, the law will be found in old tradition.

The moral tone of the Middle Ages scorned considerations of expediency, and always took right and wrong seriously, no matter how big or small the question at issue.

The idea of destroying a village to save it, or abrogating property rights to preserve them, or stealing from one to help another in more need would be quite foreign to the mediaeval mind – or, our poor time traveler.

While law was unwritten, it began to be recorded – in order to aid in stability, in order to preserve in record a previously granted right, etc.  Older charters might be discovered (or forged), suddenly calling into question ownership or claim of a certain privilege.

This, in fact, was one of the weaknesses of the mediaeval system – an instability and insecurity due to lack of records, of documentation, of written law.  All of these records were still held below the law as previously defined, but they began to take on more significance.  In this evolution the roots of statutory law can be seen.  But it did not have to evolve into statutory law as it is now defined.  The instability of mediaeval law could have been improved simply by implementing proper registers.

However, mediaeval law was slowly overtaken by Roman law, which was “easily absorbed into customary law, and then like a swelling kernel burst the ever-weakening husk of custom.”  Why law evolved this way, I do not know – although I suspect it has something to do with the legitimacy the formal church and the king gave to each other. There was power to be gained over the people for each of these institutions by supporting a greater authority in each other.  Perhaps further reading in other sources will lead me to a better understanding on this point.

In any case, I now return to our time traveling mediaeval knight.  He knows from where he came, and he now sees our situation today.  I suspect he might have a reaction similar to this. (Instead of an alien traveling through space, picture a knight-in-shining-armor traveling through time.)

For a simple person, in whom something of the mediaeval spirit survives, it is a strange thing that all law should exist in books, and not where God has planted it…. The positive written law brings with it learned lawyers and scholars, cut off from the people.  Although in fact statute law is more accurate and certain, unlearned persons become less and less sure what the law is.

But it is in technical progress alone, not in progress in ideals, that the modern concept of law is superior to the mediaeval.

Our time traveler would certainly agree, as do I.

Previous article by Bionic Mosquito: Ayn Rand and Murray Rothbard Were All Wet

A Great Moral Crusader? Here Comes the Tax Per Mile