Understanding the Swiss Central Bank Move and Its Implications for the Rest of 2015: A Guide for Dummies

As the 2008 financial crises developed, international traders sought the safety of the Swiss franc. This flight to safety intensified as the Greek financial crisis took center stage in 2009.

It resulted in the value of the Swiss franc soaring against the euro  (and to a lesser degree against other currencies). 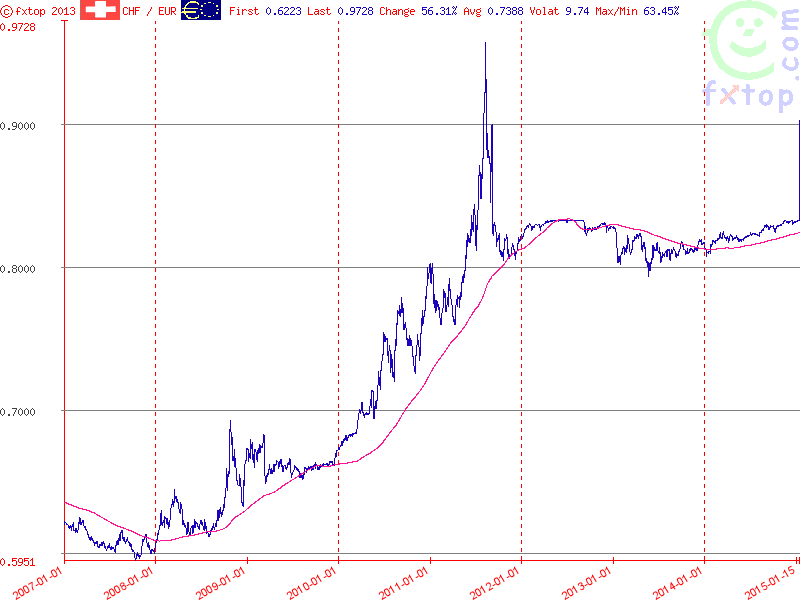 This franc strength was a great boon to Swiss consumers, as it became cheaper and cheaper to buy  products from other European countries. It, however, had the opposite effect for Swiss manufacturers that exported their products. The products became much more expensive for consumers in other countries that used the euro (and to a lesser degree other non-Swiss currencies).

In 2011, as the franc continued to soar, Swiss exporters continued to put pressure on the Swiss government and the Swiss National Bank. Eventually,  the SNB announced that it would set a minimum value for the euro — 1.2 Swiss francs — and that to enforce this minimum it was “prepared to buy foreign currency in unlimited quantities.” This caused the Swiss franc to fall back from its highs and remain in a trading range.

In order for the SNB to maintain this trading range it had to sop up billions in euros and other currencies  that international investors were willing to exchange for francs. And I do mean billions.

By the end of 2014, the SNB holdings of foreign exchange reserves amounted to more than 500 billion (in terms of Swiss francs) up from under 50 billion in 2009.

In order for the SNB to purchase this huge amount of reserves, it had to print a massive amount of new Swiss francs.

This was not winning fans in Switzerland among the prudent crowd that correctly considered this money printing irresponsible. But

here’s the kicker. It is widely believed that next week Thursday, after a meeting on the European Central Bank monetary policy committee, the ECB will announce an expanded money printing program. With the SNB propping up activity in place, this would most assuredly have resulted in even more euros flowing into the Swiss franc. In other words, if the SNB continued to prop up the euro after such an ECB announcement. it would have to absorb even more foreign exchange by printing even more francs.

Rather than doing this, the SNB announced yesterday that it would no longer prop up the euro and, instead, would allow it to trade freely. And thus,without the SNB prop, the euro, yesterday. collapsed against the franc. At one point, the euro was down more than 40% against the franc 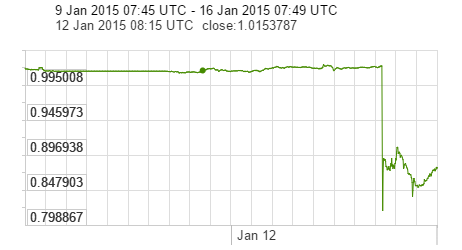 So why are some financial firms taking huge losses because of this move? Because of something known as the “carry trade.” With the SNB printing so many francs, interest rates based in francs were very low. Thus, it made sense, if you thought this policy was to continue, to borrow low interest rate Swiss francs (that is, short francs) and buy (go long)currencies where interest rates were higher. Bloomberg explained in early 2014 the perspective of those that made this trade:

The Swiss franc is offering carry traders some of the best returns in developed markets…Switzerland’s zero-to-0.25 percent target rate makes the franc a natural funder of carry trades. Its credentials may be further burnished by the 1.20-per-euro cap the Swiss National Bank imposed in 2011.

“If you were to fund a carry trade in the Swiss franc, the funding side would work out pretty well for you because it won’t get stronger,” Steve Barrow, the London-based head of Group-of-10 research at Standard Bank Plc, said by phone on Jan.

Barrow recommends selling the franc against the dollar, euro and British pound.

This trade worked well until yesterday. Then it went very, very bad. Think about it. In order to make decent money on this trade, you need to be highly leveraged. On top of this, you were short, Swiss francs, which climbed yesterday by as much as 40%. That is, in order to pay off your Swiss franc obligation, yesterday it cost you as much as 40% more than the rate at the time you borrowed the francs. And because traders employing this method are highly leveraged, they were likely getting margin calls, yesterday, to put up more money immediately or face immediate liquidation. The liquidations were likely massive with traders suffering losses so huge that some will be forced to shut down . That’s why we are already seeing foreign exchange brokers reporting massive hits. (SEE: Now, FXCM Reporting Major Losses). You can be sure that these brokers have underlying clients that also have huge losses.

Here is a statement released by one foreign exchange broker, most are in pretty much the same condition:

The recent move on the Swiss franc caused by the Swiss National Bank’s unexpected policy reversal of capping the Swiss franc against the euro has resulted in exceptional volatility and extreme lack of liquidity.  This has resulted in the majority of clients sustaining losses which has exceeded their account equity. Where a client cannot cover this loss, it is passed on to us. This has forced Alpari (UK) Limited to confirm today, 16/01/15, that it has entered into insolvency.

Bottom line: What is seen regularly in markets is that traders instead of understanding the fundamentals of a situation, trade as though current trends will continue forever. When those trends reverse, the losses are enormous. Because most markets are rigged by central bank manipulations. the potential for all kinds of reversals in trends is possible. Almost no trader believes these trends can be

reversed quickly, but when everyone believes they can’t and the trend does reverse, and the shift is recognized, it happens very quickly and the losses are massive. Currently very few (I am in a very small minority who does) believe that the fundamentals will ultimately result in very rapid price inflation (5% plus) and much faster hikes in interest rates than almost all expect, sometime by the end of 2015..Because no one is expecting these things to occur, the bloodbaths will be as bad as the Swiss franc carry trade bloodbath we saw yesterday, if not much worse. The year 2015 will be the year of bloodbaths, The Fed and other central banks have simply pushed their manipulations to the edge and they will be forced to reverse direction because of market pressures in the same way that the SNB was forced to give up its propping up of the euro. When this occurs, and traders trading based on current trends have to unwind their positions, financial markets will be rocked to the core.

Previous article by Robert Wenzel: ‘I Am Paul Craig Roberts’

Die for Charlie Hebdo?MLK: His Murder and the Government Cover-Up