By Jim Quinn
The Burning Platform

“There is no means of avoiding the final collapse of a boom brought about by credit expansion. The alternative is only whether the crisis should come sooner as a result of a voluntary abandonment of further credit expansion, or later as a final and total catastrophe of the currency system involved.” –Ludwig von Mises

The surreal nature of this world as we enter 2015 feels like being trapped in a Fellini movie. The .1% party like it’s 1999, central bankers not only don’t take away the punch bowl – they spike it with 200% grain alcohol, the purveyors of propaganda in the mainstream media encourage the party to reach Caligula orgy levels, the captured political class and their government apparatchiks propagate manipulated and massaged economic data to convince the masses their standard of living isn’t really deteriorating, and the entire façade is supposedly validated by all-time highs in the stock market. It’s nothing but mass delusion perpetuated by the issuance of prodigious amounts of debt by central bankers around the globe. And nowhere has the obliteration of a currency through money printing been more flagrant than in the land of the setting sun – Japan. The leaders of this

former economic juggernaut have chosen to commit hari-kari on behalf of the Japanese people, while enriching the elite, insiders, bankers, and their global banking co-conspirators.

Japan is just the point of the global debt spear in a world gone mad. Total world debt, excluding financial firms, now exceeds $100 trillion. The worldwide banking syndicate has an additional $130 trillion of debt on their insolvent books. As if this wasn’t enough, there are over $700 trillion of derivatives of mass destruction layered on top in this pyramid of debt. Just five Too Big To Trust Wall Street banks control 95% of the $302 trillion U.S. derivatives market. The reason Jamie Dimon and the rest of the leaders of the Wall Street criminal syndicate commanded their politician puppets in Congress to reverse the Dodd Frank rule on separating derivatives trading from normal bank lending is because these high stakes gamblers want to shift their future losses onto the backs of middle class taxpayers – again. The bankers, with the full support of their captured Washington politicians, will abscond with the deposits of the people to pay for their system destroying risk taking, just as they did in 2008 by holding taxpayers hostage for a $700 billion bailout. 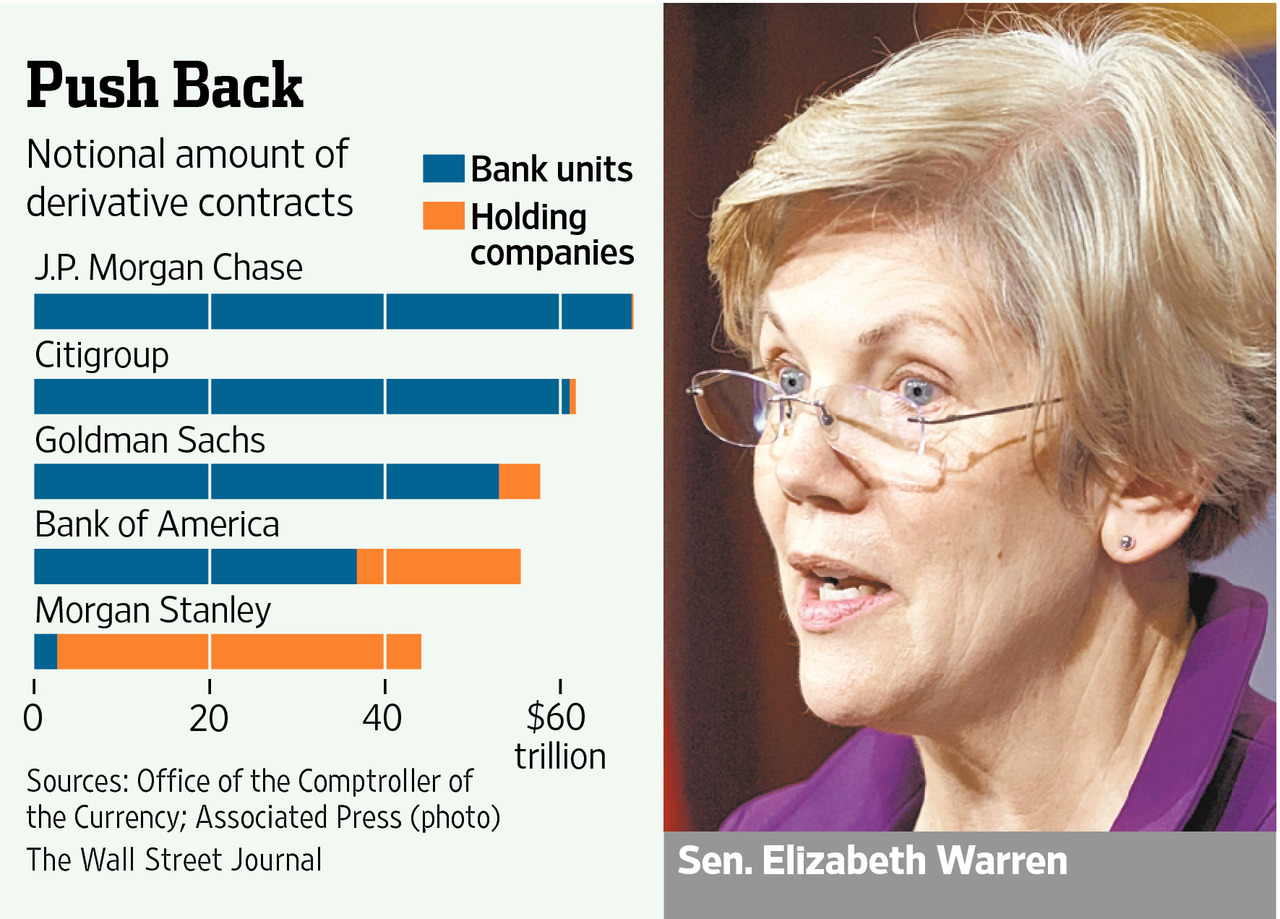 Only the ignorant, intellectually dishonest, employees of the Deep State, CNBC cheerleaders for the oligarchy, or Ivy League educated Keynesian loving economists choose to be willfully ignorant regarding the true cause of the 2008 implosion of the worldwide financial system. The immense expansion of credit in the U.S. from 2000 through 2008 was created, encouraged, supported and sustained by Alan Greenspan, Ben Bernanke and their

cohorts at the Federal Reserve through their reckless lowering of interest rates and abdication of regulatory oversight, as their owner banks committed the greatest financial control fraud in world history. Total credit market debt in the U.S. grew from $25 trillion in 2000 (already up 100% from $12.5 trillion in 1990) to $53 trillion by 2008.

The bankers, politicians, mainstream media corporations, and mega-corporations that run the show lured Americans into increasing their credit card, auto loan, and student loan debt from $1.6 trillion in 2000 to $2.7 trillion in 2008, while extracting over $600 billion of phantom home equity from their McMansions. And it was all spent on things they didn’t need, produced in Chinese slave labor factories. The mal-investment boom was epic and the collapse in 2008 would have purged the bad debt, punished the risk takers, bankrupted the criminal banks, reset the financial system, and taught generations a lesson they needed to learn – excess debt kills. Instead of voluntarily abandoning the madness of never ending credit expansion and accepting the consequences of their folly, the world’s central bankers and captured politician hacks chose to save bankers, billionaires, and the ruling elite at the expense of the common people.

The false storyline of government austerity continues to be peddled to the public, but is nothing but pablum served to the mentally infantile masses, while the criminals continue to manufacture debt out of thin air, pillage the wealth of the working class, gamble recklessly knowing it’s with taxpayer funds, debase their currencies in an effort to make their debts easier to service, and enrich themselves and their cohorts, while impoverishing the little people. Consumer credit card debt peaked at $1.02 trillion in mid-2008. After hundreds of billions in bad debt write-offs by the Wall Street banks and shifted to the taxpayer, the American consumer has purposefully avoided running up credit card debt on Chinese produced crap, despite the urging of bankers, the mainstream media and politicians to revive our warped, debt laden, consumption dependent economy. Credit card debt is currently $140 billion BELOW levels in 2008, despite the never ending propaganda about an economic and jobs recovery. The fake Wall Street created housing recovery is confirmed by the fact mortgage debt outstanding is $1.4 trillion LOWER than 2008 heights and mortgage applications are hovering at 1999 levels.

Where Americans were in control and understood the consequences of their actions, they willingly reduced their debt based consumption. This was unacceptable to the powers that be at the Federal Reserve, in the banking sector, consumption dependent mega-corporations, and their government puppets on a string. The government took complete control of the student loan market and used their ownership of the largest auto lender – Ally Financial (aka GMAC, aka Ditech, aka Rescap) to dole out subprime auto loans and subprime student loans at a prodigious rate. The Wall Street banks joined the party, with assurance from Yellen and the Obama administration their future losses would be covered.

The Greenspan/Bernanke/Yellen Put lives on. So, while credit card debt is 14% below 2008 levels, student loan and auto loan debt has soared by 47%, up $769 billion from its early 2010 lows. The Fed and their government minions have desperately accelerated their credit expansion in a futile effort to revive our moribund, debt saturated, welfare/warfare empire of delusion. After temporarily plateauing at $52 trillion in 2010, the acceleration of consumer credit, issuance of corporate debt to fund stock buybacks, and of course the $5 trillion added to the National Debt by Obama, have driven total credit market debt to an all-time high of $58 trillion. In addition, the Fed expanded their balance sheet by $3.6 trillion through their various QE schemes, funneling the interest free funds to their Wall Street owners to create the illusion of economic recovery through a stock market surge. The .1% never had it so good.

Of course, the U.S. has not been alone in attempting to cure a disease caused by excessive debt by issuing trillions in new debt. It is clear to anyone not in the employ of the Deep State that central bankers in the U.S. are working in concert with central bankers in Europe and Japan to keep this farcical Keynesian nightmare from imploding under an avalanche of deflation, wealth destruction, chaos and retribution for the guilty. The Federal Reserve used every means at their disposal to hide the fact they bought over $400 billion of mortgage backed securities from European banks and in excess of $1.5 trillion of their QE benefited foreign banks. It was no coincidence that one day after the Fed ended QE3, the Bank of Japan announced a massive “surprise” increase in purchases of bonds and stocks. It wasn’t a surprise to Janet Yellen, as this was the plan to keep stock markets rising, record Wall Street bonuses being paid, and further enrichment of the .1% global elite. The Japanese stock market has surged 18% since the October 31 announcement, with the U.S. market up 10%. Now it is time for Draghi to pick up the baton and create another trillion or two to support the lifestyles of the rich and famous. Central bankers know who they really work for, and it’s not you.

Criticizing Israel Why I Hate Skiing