Folks, take economic cover. There is already a rabid financial mania loose in the land as reflected in the irrational exuberance of the stock market, but, in fact, the fairy tale economics fueling the current financial bubble is fixing to leap into a whole new realm of lunacy. Namely, an out-and-out drop of “helicopter money” to the main street masses.

That’s right. The Keynesian brain freeze has so deeply infected the Wall Street/ Washington corridor that the grey old lady of the establishment, the Council On Foreign Relations, has lent the pages of its prestigious journal, Foreign Affairs, to the following blithering gibberish:

It’s well past time, then, for U.S. policymakers — as well as their counterparts in other developed countries — to consider a version of Friedman’s helicopter drops…..  Rather than trying to spur private-sector spending through asset purchases or interest-rate changes, central banks, such as the Fed, should hand consumers cash directly. In practice,

this policy could take the form of giving central banks the ability to hand their countries’ tax-paying households a certain amount of money. The government could distribute cash equally to all households or, even better, aim for the bottom 80 percent of households in terms of income.Targeting those who earn the least would have two primary benefits. For one thing, lower-income households are more prone to consume, so they would provide a greater boost to spending. For another, the policy would offset rising income inequality.

I have actually checked, and, no, the publishing arm of the Council on Foreign Relations has not been hacked by writers from the Onion. This monetary insanity is for real!

Well, that’s what the authors—a political science professor from Brown and a beltway bandit from Washington DC—actually say. Since their “under consumption” thesis completely denies every known fact about modern economies, their “analysis” needs to be quoted verbatim:

Three trends explain why. First, technological innovation has driven down consumer prices and globalization has kept wages from rising. Second, the recurring financial panics of the past few decades have encouraged many lower-income economies to increase savings — in the form of currency reserves — as a form of insurance. That means they have been spending far less than they could, starving their economies of investments in such areas as infrastructure and defense, which would provide employment and drive up prices. Finally, throughout the developed world, increased life expectancies have led some private citizens to focus on saving for the longer term (think Japan). As a result, middle-aged adults and the elderly have started spending less on goods and services.

Alrighty then, lets “think Japan” and explore the savings glut thesis. Does the chart below suggest that Japan’s robust pre-1990 growth rate—which the authors laud—-has vanished during the last two decades because the savings rate went up?

In fact, it has plummeted from north of 20% during Japan’s heyday of growth to a US style 3% at present.  Worse still, this occurred during the waning years before Japan began turning into a retirement colony. That is, instead of building up a nest egg for their greying years, Japanese households in recent times have spent nearly everything they earned.

So even though Japan’s real GDP growth rate drastically downshifted from 4-7% during the pre-1990 boom years to just 1% annually during the last two decades, it wasn’t due to a “savings glut”.  Even the most superficial examination of the data establishes that truth. Nor is Japan an outlier among developed economies. The US picture is virtually the same over this period. The household savings rate during the pre-1980 period, and before the Greenspan-Bernanke-Yellen money printing era got fully underway, was always above 10% of disposable income. As shown below, it has tumbled into the 3-6% zone since the late 1990s.

Like in Japan, therefore, the US baby boomers were spending almost all they earned in their most productive years. Accordingly, the sharp down-shift in the US  real GDP growth rate—-from 3-4% pre-1980 to only 1.8% during the last 14 years—- is not due to a “savings glut”, either.

In a word, the entire “savings glut” theory  is upside down with respect to Japan, the US and the developed economies of Europe as

well. All of these societies are now getting old, fast. The real problem is that they have over-consumed, not under-saved, during the central bank sponsored debt party of the last 30 years.  Consequently, the actual culprit weighing down real growth is “peak debt” on household, business and government balance sheets, not a perverse failure to spend.

In fact, during the several decades leading up to the financial crisis, household and business leverage ratios were steadily ratcheted-up, meaning that consumption spending was financed by currently earned income plus borrowed funds from the credit card, mortgage and consumer loan markets.  But the resulting consumption spree was a one-time economic trick that has now been exhausted.

Accordingly, the credit expansion channel of monetary stimulus is now broken and done. All of the massive balance sheet expansion by major central banks is being shunted into the financial gambling channel where it fuels asset price inflation, not main street jobs, output and enterprise.

Stated differently, the downshift in developed world growth is not due to under-consumption and insufficient “aggregate demand”. The GDP of these economies is growing at “only” 1-2% per annum because production and productivity are also languishing in this same tepid zone. But that’s a problem on the supply-side—reflecting high taxes, high debt burdens, regulatory hurdles to enterprise and the vast financialization of developed economies owing to central bank distortion of financial markets.

Self-evidently, money is flowing in a mighty tidal wave into the Wall Street casino where it is driving the price of existing financial

assets skyward. In that environment, labor cannot compete with debt, and so it is is liquidated on the margin in order to generate incremental cash flow to pay the interest. Likewise, investment in productive assets cannot compete with the short-run boost to stock prices resulting from massive corporate stock repurchases.

At the end of the day, ironically, helicopter money—-the kind currently being dropped on the financial markets—-is the overarching problem. Redirecting the fleet to main street is obviously nothing more than crackpot economics.

The real problem is way too much debt—the legacy of Keynesian central banking, manipulated, sub-economic interest rates and the consequent scramble for yield which has enabled governments to borrow and spend at unsustainable rates. Now the piper has to be paid, and the phony growth that was stolen from the future during the bubble years must unavoidably be recouped. 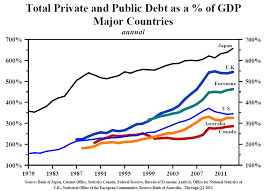 Indeed, when the US data from the above chart is inspected more closely, the barrier of peak debt fairly screams out. And the back story only further demolishes the authors’ thesis as quoted above.

They claim that the peasants who came out of the rice paddies and into the factories of East China saved too much on the one hand, and drove down the price of labor on the other, thereby causing developed world wages to stagnate and household consumption spending in Chicago and Paris to languish.

Now that is really Keynesian gibberish. The soaring ratio of US debt to national income shown below was enabled by the Fed and its vast expansion of dollar liabilities which have financed $8 trillion of current account deficits since the late 1970s. The effect was that US exported dollar inflation, and mercantilist central banks in China, Japan, South Korea and elsewhere in Asia and the developing world bought-up this dollar inflow in order to peg their currencies and fuel their export based development policies.

Accordingly, the vaunted and massive “currency reserves” of the developing world reflected not an excess of genuine savings, but an abundance of domestic money printing. And the cheap labor which allegedly suppressed US consumption was actually nothing more than the economic blow-back from attempting to inflate domestic spending through cheap debt and the emission of a massive and continuous flow of unwanted dollars into the world market. 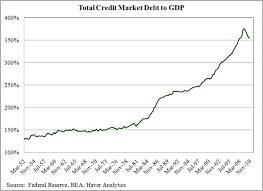