The Regime Celebrates its Birthday

As Clyde Wilson once pointed out, the symbol of America started out as “George Washington on his white horse” but is now “a corporate lawyer/lobbyist in an armchair.”  The latter refers to the Lincoln Memorial, which is not so much the symbol of “America” but of the governmental regime in Washington, D.C.  That is why Lincoln must be idolized, worshipped, and compared to Jesus Christ (“He died on Good Friday and died for America’s sins just as Christ died for the world’s sins” his idolaters and cultists have been saying for generations), and referred to as “Father Abraham.”

Lincoln did not create “a new birth of freedom” but a new birth of mercantilism, crony capitalism, and centralized government monopoly of the sort the American colonists had fought a revolution against.  A real statesman would have followed the British example (and the French, Danes, Dutch, Spanish, and Swedish), and the example of all the Northern states in the U.S., and found a way to end slavery peacefully through some kind of compensated emancipation (See Jim Powell, Greatest Emancipations: How the West Ended Slavery).  Instead, the ending of slavery eventually became associated with a war that, according to the most recent research, resulted in as many as 850,000 deaths (the old death count was 620,000). 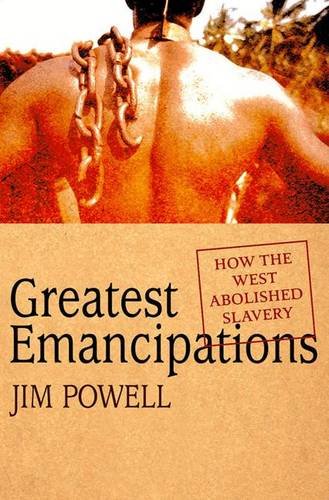 He could have achieved this had he spent as much time on it as he spent on figuring out how to deport every last black person, including the soon-to-be-freed slaves.  Lincoln was hard at work diligently counting up transport ships and communicating with foreign governments about purchasing land from them for all the deported black people up to three days before his death, as documented in the widely-acclaimed book, Colonization After Emancipation, by Phillip Magness and Sebastian Page.  This research blows out of the water the tall tale told by the Lincoln cult that Lincoln mysteriously gave up on his life-long advocacy of “colonizing” all of the black people outside of the United States sometime around 1863.

What is really being celebrated on Lincoln’s birthday is the centralized, bureaucratic regime that he, more than any other single person, is most responsible for bringing about.  Black people did not begin to experience any 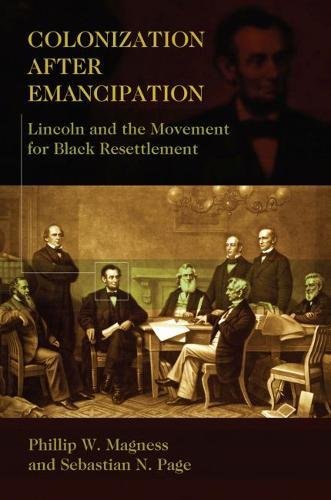 semblance of equality until a century after the “Civil War,” whereas the first observance of Lincoln’s birthday was in 1874.  It is unlikely that that observance was intended as a celebration of black equality.

As the twentieth-century literary critic Edmund Wilson once wrote, it was Lincoln, Lenin and Bismarck who did more than any other individuals in their respective countries to introduce highly centralized governmental bureaucracies.  Lincoln did this in America by destroying the system of states’ rights and federalism that was created by the founding fathers by destroying the rights of secession and nullification.  He destroyed the original American union and replaced it with a Soviet-style coerced union held together by mass murdering literally hundreds of thousands of fellow citizens for simply asserting the truth of the founders that the original union was voluntary, as described in Article 7 of the U.S. Constitution.

Statists of all description have swooned over Lincoln’s example of destroying constitutional liberty in the Northern states with his illegal suspension of Habeas Corpus, the mass arrest of tens of thousands of political dissenters, the shutting down of hundreds of opposition newspapers and the imprisonment of their editors and owners (without due process), the deportation of an outspoken congressional critic (Clement L. Vallandigham of

Dayton, Ohio), his rigging of elections, and his dictatorial behavior in general.

To this day, supporters of the destruction of civil liberties routinely cite the “sainted” Lincoln’s example as “justification” for such things as NSA spying on the entire American population in violation of the Fourth Amendment, as National Review editor Rich Lowry has done.  Neocon pundit Michelle Malkin cited Lincoln’s gulags when she made her book-length case for rounding up American Muslims and imprisoning them in concentration camps (“In Defense of Internment” is the title of her book).  Even the former dictator of Pakistan (Musharraf) quoted Lincoln’s behavior as “justification” for imposing martial law in his country several years ago.

Ever since the time of Hamilton, Lincoln’s political inspiration, the real purpose of creating a highly centralized, bureaucratic regime, was to impose on all Americans a version of the corrupt British system of “mercantilism” that the American colonists fought a war of secession over. Hamilton called it “The American System.”  Henry Clay, who Lincoln once said was the source of all of his political ideas and “the beau ideal of a statesman,” picked up the mercantilist mantle after the death of Hamilton and of Hamilton’s party, the Federalists.  Lincoln then became the standard bearer for this corrupt system of government of the plutocrats, for the plutocrats, by the plutocrats.

In his History of the American Whig Party historian Michael Holt wrote that no one in the party was a stronger supporter of central banking and the resurrection of America’s first central bank, the Bank of the United States, than Lincoln was.  (Lincoln was a Whig for twenty years but a Republican for about twelve years).  The Lincoln regime finally nationalized the money supply with its National Currency Acts, Legal Tender Acts, creation of the greenback dollar, and a special tax on competing currencies.

Lincoln was a lifelong protectionist who boasted of having made more speeches in favor of high protectionist tariffs than on any other subject.  During his regime the average tariff rate rose from 15% to almost 50% and remained in that range until the federal income tax was adopted in 1913.  Protectionist tariffs have been recognized for centuries as an instrument of political plunder, which is why South Carolinians labeled an earlier, 1828 tariff increase “The Tariff of Abominations” and nearly seceded then because of it. Government of the plutocracy, for the plutocracy, by the plutocracy.

Also beginning with Hamilton, the advocates of mercantilism schemed to use tax dollars to subsidize private corporations for road-, canal-, and railroad-building.  As of 1861 they had failed miserably, with president after

president (including Jefferson, Madison, Monroe, Jackson, Tyler, and others) vetoing or opposing all such legislation on constitutional grounds.  But Lincoln abandoned all “constitutional scruples” when it came to corporate welfare, as one historian put it, and immediately upon assuming office called a special session of Congress to begin subsidizing transcontinental railroad corporations (in June of 1861).

The Pacific Railway Act made millionaires out of myriad Republican Party politicians and supporters by purchasing building materials from them or giving them lavish subsidies for railroad building.  Lincoln himself became enriched when he chose Council Bluffs, Iowa, where he had invested in real estate five years earlier, the eastern terminus of the government-subsidized transcontinental railroad.  Then a few years later the biggest political scandal in American history up to that point erupted with the Credit Mobilier scandal, the result of rampant theft of government funds by various politically-connected businessmen, members of Congress, and even the vice president of the United States.  This of course is exactly the kind of thing the Jeffersonian opponents of such subsidies had always predicted would happen.  Government of plutocracy, for plutocracy, by plutocracy.

subsidies to mining and forestry corporations under the “Homestead Act” were all referred to by a North Carolina Newspaper in 1865 as “Lincoln’s New Deal.”  And you probably thought that phrase came from FDR’s “brains trust.”  This extreme economic interventionism is also what is meant to be celebrated on Lincoln’s birthday.

Having been a Whig for much longer than he was a Republican, Lincoln the wealthy railroad industry lawyer/lobbyist was well known as the chief political water carrier of the Northern business aristocracy.  He lived in the biggest house with numerous servants in a part of Springfield, Illinois that is today known as “Old Aristocracy Row.”  Government of the plutocracy, for the plutocracy, by the plutocracy is always what Lincoln worked for in politics despite his occasional rhetoric to the contrary.

Lincoln did seek the votes of lower- and middle-class whites by opposing the extension of slavery into the new territories by declaring that “we” want the territories to be the exclusive province of “free white labor” (his exact words).  He supported the Illinois constitution’s prohibition of the migration into the state of any black people for the same reason: to pander to white voters by promising to eliminate all competition for the jobs by black people, free or slave.  He was even a manager of the Illinois Colonization Society, which sought to use state tax dollars to deport the small number of free blacks who resided in the state.

Black people, however were never to share in the economic growth that Lincoln mistakenly said would come from the adoption of his mercantilist economic policies.  He never wavered from his belief, enunciated in his 1852 eulogy to his idol Henry Clay, that sending all black people back to their “long-lost fatherland” of Africa would be a “glorious consummation.”  “[I]t is morally right, and . . . favorable to our interest, to transfer the African to his native clime,” Lincoln declared (Collected Works of Abraham Lincoln, Vol. II, p. 409).  He always spoke of black people as though they were space aliens (i.e., “The Africans”) and if he mentioned equality, there was always the qualifier that such a thing would only be possible or desirable “in their native clime” of Africa or somewhere else, never in the United States.  “There is a natural disgust in the minds of nearly all white people to the idea of an indiscriminate amalgamation of the white and black races,” he said (Collected Works, Vol. II, p. 405), and, “What I would most desire would be the separation of the white and black races” (Collected Works, Vol. II, p. 521).  “I am not, nor ever have been in favor of bringing about in any way the social and political equality of the white and black races . . . .  I am not nor ever have been in favor of making voters or jurors of negroes, nor of qualifying them to hold office, nor to intermarry with white people,” Lincoln declared during one of the Lincoln-Douglas debates (Collected Works, Vol. III, pp. 145-146).

None of this is ever taught in the public school textbooks, for obvious reasons.  And Americans used to criticize the Soviet communists for rewriting their history in order to glorify the Soviet state.  During the past fifteen years or so that I have been researching and writing about this subject I have learned that the average American knows nothing at all about Lincoln or his War to Prevent Southern Independence apart from a few slogans that we were all taught in elementary school and which are endlessly repeated by the kept puppies of the state-worshipping media and the organs of the popular culture.  Many Americans become very unhappy when confronted with indisputable historical facts that conflict with the Official State History.  They are perfectly conditioned to living their lives as happy fools.  These are the people who will with pride celebrate Lincoln’s birthday.  They are becoming more and more annoyed, however, by fellow citizens who have instead been outraged over being made fools of by their own government “public” school establishment.  Some of these people may even be burning Lincoln in effigy on his “birthday.”

The State’s Lying House Organ Want To Live Off Other People?