IT IS TIME: Move Your Money Out of the US Banking System

I am often asked if it is time to leave the United States because it has becoming too totalitarian. My answer has been that it depends on the individual and his circumstances, but I haven’t  given a blanket “Get out of the United States” advisory.

I am still not prepared to give that warning, however, I am now advising that your money be moved outside the US banking system. Within the last 24 hours, I have learned of two major banks that are making it difficult for you to send international wires or draw out large amounts of cash. Both JPMorganChase and HSBC USA have instituted new policies which will make it difficult for you to withdraw your funds in certain ways. This is not good. There are apparently some workarounds relative to these policies, but just try setting up those workarounds when you want to move your money during some kind of panic.

This is what you will face: 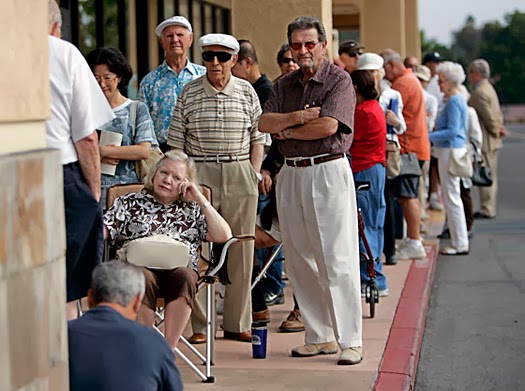 Bank line in California in 2008 at IndyMac Bank

Totalitarians don’t take away all your freedoms at once. They do it in incremental measures. Watch the movie The Pianist  to understand how many Jews ended up in gas chambers by shrugging off early totalitarian measures.

The prevention or delaying of certain customers from sending international wires, and JPMorganChase stopping some accounts from withdrawing large amounts of cash,  is a serious signal that we are well along the way to a banking sector that doesn’t respect its customers and has no compunctions about preventing customers from pulling out their money, if the banks deem it in their interest to prevent such withdrawals.

Bottom line: You are playing with fire if you keep any serious amount of money in a US bank.

It is time for serious diversification. Depending upon the size of your assets, there are different things that should be done. But almost everyone should have some cash and gold coins stored outside the banking system. Those with significant assets should begin international diversification now, while it is still possible. I don’t consider any country completely safe from the clutches of the US government so international diversification, among many countries, is also called for: Switzerland and Hong Kong for starters, but also other countries that are not known as tax havens, the USG has their claws into these countries, be creative.

Wenzel: Should You Put the Money You Withdraw in Gold or Bitcoins?

Previous article by Robert Wenzel: The Black Market in Online Drugs Is Dead