The Most Cynical and Hypocritical Speech Ever Delivered

Over the Thanksgiving holiday (decreed by Lincoln in 1863) one neocon Tabloid, National Review, reprinted Lincoln's October 3, 1863 proclamation, highlighting Abe's cynical reference to "the Most High God . . ." Another neocon Tabloid, The American Spectator, published the typical sappy, a-historical, fact-free, rhetorical mumbo jumbo about "Father Abraham" that Harry Jaffa and his fellow Lincoln cultists are known for.

The references to God in Lincoln's Thanksgiving proclamation, like all other such references in his political speeches, are breathtakingly cynical because of the fact that Lincoln never became a Christian (according to his wife and his closest friend and law partner, William Herndon); he never joined a church; rarely ever stepped foot into one; as a young man wrote an entire book that disputed Scripture; and was famous for his vulgar stories and language. But he studied the Bible as a political tool, just as today's politicians study opinion polls.

Prior to 1863 Lincoln's references to God and the Bible in his political speeches were mostly catch phrases and buzz words ("a house divided cannot stand"). But as more and more fellow American citizens were murdered by the thousands by his army, and as the war crimes mounted, Abe stepped up his Biblical lingo. By the time of his second inaugural he wrote a speech in which he absolved himself of all blame for the war ("the war [just] came," he said), blaming the whole bloody mess on God. Presuming to know what was in the mind of God, he theorized that the Lord was punishing all Americans, North and South, for the sin of slavery. He did not theorize on why God would not also punish the British, French, Spanish, and others who were responsible for bringing 95% of all the slaves to the Western Hemisphere. In other words, his Biblical language was always a diversion and a cover-up for the war crimes against American civilians (among other atrocities) that he was micromanaging. 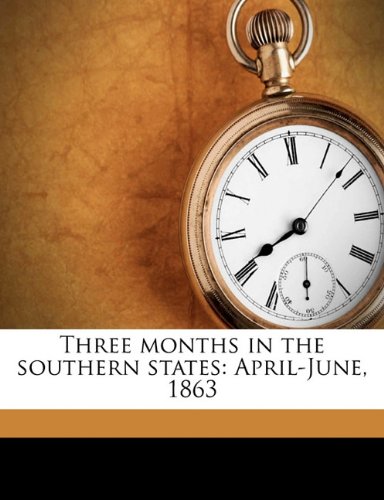 Three months in the so... Fremantle, Arthur Jame... Check Amazon for Pricing.

The first sentence of Lincoln's Thanksgiving proclamation is a real howler. The year 1863, he said, "has been filled with the blessings of fruitful fields and healthful skies." What? Healthful skies?! As of the fall of 1863 there had been several hundred thousand battlefield casualties, including thousands of men in both armies who died of yellow fever and other dreaded diseases. There were more than 50,000 casualties in the Battle of Gettysburg alone, just three months earlier.

In the second sentence, Lincoln the non-Christian claimed that "we" are "prone to forget" that all of those "healthful skies" come from "the ever watchful providence of Almighty God." Speak for yourself, Abe!

This is followed by another howler, claiming that "peace has been preserved with all nations." He apparently forgot about the Confederate States of America that he was waging total war against.

It gets worse (and funnier). The next thing he says is that "order has been maintained." Stalin said the same thing about the Soviet Union. By that time Lincoln had imprisoned thousands of Northern political dissenters without due process since he illegally suspended the writ of Habeas Corpus. He had shut down hundreds of "unorderly" opposition newspapers, and deported poor old Congressman Clement Vallandigham of Dayton, Ohio, his most outspoken critic in Congress.

As Dean Sprague wrote in Freedom Under Lincoln (p. 299), under Lincoln's "policy of oppression," the "entire judicial system was set aside" as "the laws were silent, indictments were not found, testimony was not taken, judges did not sit, juries were not impaneled, convictions were not obtained and sentences were not pronounced. The Anglo-Saxon concept of due process, perhaps the greatest political triumph of the ages and the best guardian of freedom, was abandoned."

Three months earlier there had been draft riots in New York City that one could hardly describe as "orderly." An eye witness to the riots was Colonel Arthur Fremantle of the British Army, who wrote the following about the New York City draft riots in his book, Three Months in the Southern States (p. 302):

The reports of outrages, hangings, and murder, were now most alarming, the terror and anxiety were universal. All shops were shut; all carriages and omnibuses had ceased running. No colored man or woman was visible or safe in the streets or even in his own dwelling. Telegraphs were cut, and railroad tracks torn up. 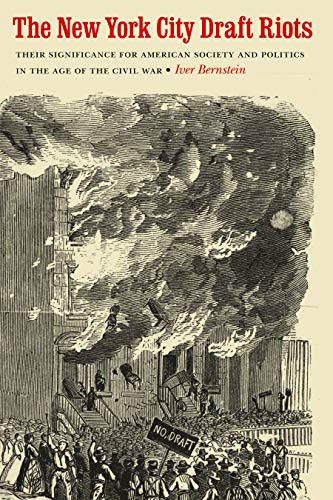 Lincolnian "order" was restored when Abe sent 15,000 troops to New York from the just-concluded Battle of Gettysburg. The troops fired indiscriminately into the draft protesters, killing hundreds, more likely thousands, of them according to Iver Bernstein, author of The New York City Draft Riots. (This scene was portrayed in the movie Gangs of New York, where Bernstein worked as an historical consultant to director Martin Scorcese).

But let's not let historical facts get in our way. Let's follow the neocon lead and swoon and weep and get chills up our legs over Abe's Big Lie that "harmony has prevailed everywhere except in the theatre of military conflict." 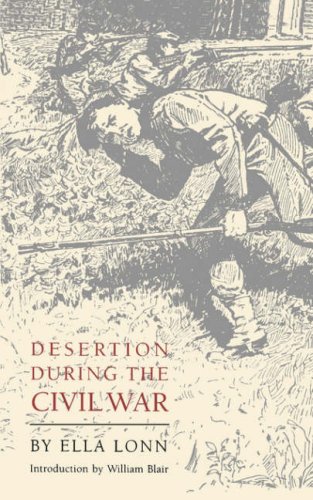 The notion that there was "harmony" and "unity" in the Northern states during the war is one of the most outrageous lies in American history. Historian Ella Lonn described how Lincoln created "harmony" within the U.S. Army in the face of massive desertions by literally hundreds of thousands of Northern men in her book, Desertion During the Civil War. Draftees "were held like veritable prisoners" and Lincoln's government "had no compunctions about shooting or hanging deserters," wrote Lonn. The murder of deserters achieved Nazi-like efficiency: "A gallows and shooting ground were provided in each corps and scarcely a Friday passed during the winter of 1863–64 that some wretched deserter did not suffer the death penalty in the Army of the Potomac. . . . The death penalty was so unsparingly used that executions were almost daily occurrences. . ." The "method of execution" was "generally shooting but hanging seems to have been used occasionally."

The Thanksgiving speech gets even worse. The very next uttering of Abe's is that "the laws have been respected and obeyed." Well, not by Abraham Lincoln, certainly. Even his own attorney general, Robert Bates, stated that his suspension of Habeas Corpus was illegal and unconstitutional, as was the suppression of free speech throughout the North. West Virginia was illegally carved out of Virginia to form a new slave state as part of the union. And where in the Constitution is the president permitted to order soldiers to imprison and deport an opposition member of Congress without any due process? Or rig national elections and imprison duly-elected members of the Maryland state assembly without due process? Doesn't the Constitution require presidents to see to it that the states have republican forms of government?

Indeed, Lincoln's invasion of the Southern states was the very definition of treason under the U.S. Constitution. Article 3, Section 3 proclaims that: "Treason against the United States, shall consist only in levying war against them, or adhering to their Enemies, giving them Aid and Comfort" (emphasis added). Treason under the U.S. Constitution consists "only" in waging war against "them," namely, the free, independent and sovereign states, plural. Lincoln redefined treason to mean any criticism by anyone of him or his administration. In fact, he even said that a man who stands by and says nothing while the war was being discussed was guilty of "treason."

Lincoln also violated international law and his own military code by intentionally waging war on American civilians for four years, killing more than 50,000 of them according to historian Jeffrey Rogers Hummel. Even pro-Sherman biographer Lee Kennett wrote in his book, Marching Through Georgia (p. 286), that "had the Confederates somehow won, had their victory put them in position to bring their chief opponents before some sort of tribunal, they would have found themselves justified (as victors generally do) in stringing up President Lincoln and the entire Union high command for violation of the laws of war, specifically for waging war against noncombatants."

All the "great things" that had happened since he became president, said Abe, were "the gracious gifts of the Most High God . . ." Therefore, he said, "we" should celebrate as "the whole American People" to give thanks to God with a national holiday. This was another very large contradiction: Lincoln never admitted that secession was legal, therefore, he always considered Southerners to be a part of "the whole American people" for political purposes. It is doubtful that a single Southerner, in 1863, would have heeded Abe's advice and given thanks for all that he had done for them.

Lincoln concluded his Thanksgiving propaganda speech with more religious lingo, thanking the Lord for "the full enjoyment of peace, harmony, tranquility," and, get this – Union. The Union – always spelled with a capital "U" – was not just a practical political arrangement created by the founding generation mostly for foreign policy purposes, as Thomas Jefferson said it was. It was supposedly divine, the work of God. Lincoln the non-Christian knew this for sure. It's what created The Divine Right of Lincoln, similar to The Divine Right of Kings during the Middle Ages.

This deification of the state echoed the words of the fanatical New England Unitarian preacher Henry W. Bellows, who worked in the Lincoln administration as its Sanitary Commissioner and whose son, Russell, was Robert Todd Lincoln's Harvard classmate and best friend. (Lincoln's son Robert spent the war years "fighting" for good grades at Harvard). Bellows authored a creepy, totalitarian-sounding book in 1863 entitled Unconditional Loyalty which declared that "the state is indeed divine, as being the great incarnation of a nation's rights, privileges, honor and life" itself." Moreover, "the first and most sacred duty of loyal citizens" was "to rally round the president – without question or dispute."

In his new book, The Fiery Trial: Abraham Lincoln and Slavery (p. 265), Lincoln cultist Eric Foner informs us that "it is not surprising that Lincoln seemed to share this outlook." This "outlook" would have caused George Washington to reach for his sword and lead another Revolution against another despotic and dictatorial regime.

Classical Rhetoric 101: A Brief History How To Strangle the Goverment