A tsunami of Yemeni mail-bombs is about to bury us: this week, "inspectors from the U.S. … [headed] to Yemen to monitor security practices and to try to find the holes in their system that allowed two explosive packages to leave the country. … a team of six inspectors from the Transportation Security Administration [TSA] will make recommendations and give Yemeni officials training to improve their cargo security." That oughta have the mail-bombs absolutely flooding the ol’ Homeland.

Meanwhile, John "Show Us Yours" Pistole, chief deviant at the TSA, also "met on Wednesday with officials in Sanaa [Yemen]…" The excuse for John’s junket? "[Improving] cargo security practices," of course. As if the TSA already had good ones in place or, even better, has ever "improved" anything it touched. And it’s touching a lot, believe me, including children’s crotches. Hmmm… Don’t Moslem countries cane infidels for such gross pedophilia? Here’s hoping Johnny and the six "inspectors" come home too sore to sit down.

We’ll also hope the assorted Yemeni officials forced to listen as these perverts prattled asked a few questions first. Such as, "Exactly how many terrorists has your TSA discovered? Say again? None? Are you serious? And your subjects aren’t in open revolt after 8 years of long lines and shedding their shoes for nothing? Wow. That’s pretty remarkable. And now they’re marching into your strip-search machines, give your screeners a thrill, they can even molest them all they like, and your subjects still aren’t defying your decrees? Wow, I mean … it’s just … wow, I haven’t heard of any regime anywhere imposing serfdom that stunning since the Middle Ages and primae noctis! Tell us how you did it!" Turns out The Gang of Seven may have much to teach Yemen’s thugs, though not about "cargo security practices."

The TSA is not only utterly immoral, it is completely, mind-bogglingly incompetent. Anecdotes abound of the penknives, nail-clippers, normal-sized bottles of shampoo and other Weapons of Mass Destruction passengers have deliberately or inadvertently smuggled past its checkpoints: just peruse the readers’ comments on virtually any article concerning the agency. If you want "official" proof of its ineptitude, check out the reports from its own undercover inspectors or from the Government Accountability Office (HA!!!! Never accuse Our Masters of an irony deficiency). Screeners can leer at smutty scans until they go blind (oh, please, oh, please!), but the TSA will never protect aviation or passengers or anything but its own butt because it is inherently incompetent.

So for the agency to advise other nations [sic for "boss them around"] is akin to Bill and Hill’s counseling Chelsea on building a happy marriage: absurd at best and downright disastrous if heeded.

On the other hand, you and I are compensating Yemen to the tune of $300 million annually for Our Rulers’ arrogance: Comrade Obama "‘highlighted that the U.S. relationship with Yemen is focused on counterterrorism issues, ‘as well as building a stable and prosperous Yemen through economic and humanitarian assistance.’ [Yemeni President Ali Abdallah] Saleh ‘made a full commitment’ to cooperate with the U.S…" Oh, I’ll bet he did. Yo, Ali: how’s about we make a deal? From now on, we’ll keep the TSA’s nitwits home instead of advising your ears off, and you refund our money.

The Feds have certainly gotten mileage (literally, in The Gang of Seven’s case) out of Yemen’s mail-bombs, haven’t they? Those of us mesmerized by car crashes and the TSA discern a pattern in such "terror alerts," beginning with the granddaddy of them all, 9/11. Somehow, these scares always occur just when Leviathan seeks more power. Congressional Democrats had been looking for a way to unionize airport screeners (see Susan and Joseph Trento’s Unsafe at Any Altitude: Exposing the Illusion of Aviation Security, pages 154 and 158), and bingo, 9/11 not only happens, it spawns the TSA. Richard Reid and his shoe-bomb followed four months later, "proving" the need for a barely-born bureaucracy that was nonetheless already under criticism. 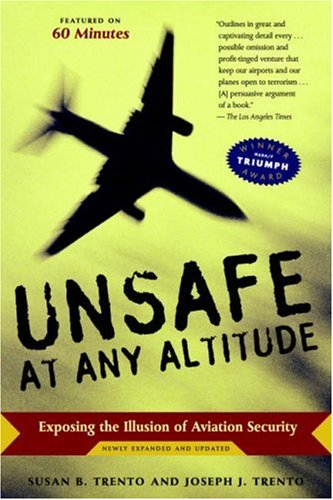 Meanwhile, the TSA has lusted to photograph us naked since 2002. Taxpayers infuriated at such voyeurism forced the agency to postpone its wickedness until 2007. Even then, passengers continued resisting the technology everywhere the TSA tried to introduce it.

Until Umar Farouk Abdulmutallab and his explosive Depends, that is. Blowing off parts of your body is perhaps the most dramatic but least effective way to bring down an aircraft, as Reid had shown. Yet Umar secreted his bomb in precisely the anatomical area best calculated to stampede Americans into the TSA’s Porn-o-Scans.

And so the TSA busily installed its X-rated X-rayers at airports across the country this year — 317 at 65 airports by the end of October, with another 1000 slated for next year and, eventually, for all 2000 concourses in the country. The TSA will then ogle and irradiate every passenger on every flight.

But as the inconvenience, delay, and devastating humiliation of naked scans hit passengers, they again rebelled, detonating diapers be danged. Pilots walked off the job rather than suffer such an outrage; presidents of pilots’ unions decried the TSA’s sexual assault of their members "that does nothing to improve national security"; passengers threatened corporations that they’ll stay home rather than patronize tourist-traps if it means the TSA will sexually abuse their kids.

And then to the rescue come the alleged Yemeni mail-bombs. "Give thanks for those who watch over us," babbled one of Leviathan’s mainstream sycophants.

Coincidence? Or yet another charade our deceptive, diabolical Feds stage-managed?

There’s another reason to doubt Our Rulers’ contention that unelected, unappointed terrorists are stuffing their shoes, underwear, and mail with bombs: why would they bother? Explosives are expensive, hard to procure, and so temperamental that terrorists are likelier to blow up themselves than their intended target. You may be willing to tolerate these drawbacks if it’s the only way to incapacitate the enemy — but if he’s doing a fine job of it himself, or if there are far less perilous means of smiting him, why sacrifice yourself?

For instance, when you can create chaos at Newark’s oh-so-inappropriately-named Liberty International Airport by opening a door, why mess around with a bomb? "Late for their flight to Nashville …, a man, woman and teenage boy apparently tried to open a jet bridge door at the Terminal C gate area and triggered a door alarm …" They missed their flight, but that didn’t keep "Continental Airlines [from bringing] the plane back to the jetway, where all passengers were cleared. The flight departed 36 minutes late … Three checkpoints in Terminal C were closed for 10 minutes … While the shutdown lasted only a matter of minutes, it caused a backup of passengers … There were even lines of fliers snaking around terminal floors above and below the checkpoint level, with airport personnel blocking the tops and bottoms of escalators leading to the checkpoints." See? Why fidget in uncomfortable underwear or hobble on hazardous shoes when it’s so much easier to simply open a door?

A harmless snow-globe can also bring the Amerikan Empire to its knees without even remotely endangering the terrorist. "State police Lt. J. Paul Vance says a Transportation Security Administration worker [sic for ‘leech’] spotted something that looked suspicious while screening bags and alerted state police shortly … Vance says Terminal A was evacuated as a precaution but was reopened about 45 minutes later, after authorities determined the snowglobe did not contain explosives and was not a danger."

Terrorists could also run up a "down" escalator, hunt a restroom, or pack scientific equipment in their bags. Each innocuous action has thrown the TSA’s gutless wonders into a tizzy. They then complete the terrorist’s job for him of paralyzing aviation. So why endure the hassles of working with explosives? The prudent terrorist leaves that to the Feds.

"We face a determined enemy," the pusillanimous Pistole warned us, "one who modifies their [sic] actions looking for any opportunity to exploit security.” Yep. Goons who exploited security to ogle and grope us used to wear stripes courtesy of the local jail; now their clothing comes from the TSA.

Previous article by Becky Akers: Infuriated at Getting a Little of What It's Dishing Out