One of History's Greatest Crimes

America’s hidden history is ugly and disturbing. No nation ever matched it. To Iraq alone, over the past two decades, it includes ongoing genocide, destruction, terror, occupation, and contamination – a horrendous combination of crimes, unmentioned in Western discourse.

Environmental Engineering Professor Souad N. al-Azzawi documents them, including in his report titled, "Crime of the Century: Iraq’s Occupation and DU Contamination," a detailed account of US culpability.

America’s strategic aims, he explains, include:

Spread over a large enough area, depleted uranium (DU) is a weapon of mass destruction, because it’s radioactive and chemically toxic. If ingested or inhaled through food, air, water or other means, it enters the human body, remaining for decades. An earlier article reported the dangers.

It explained that continued DU use has the potential to end planetary life, yet few understand the risk, or that weaponized DU is used regularly in missiles, bombs, shells and bullets wherever America wages war – first during the 1991 Gulf War.

Its danger comes from radiation residue after use. On impact, DU munitions penetrate deeply and aerosolize into a fine spray, polluting surrounding air, water and soil. It’s microscopic, sub-microscopic, and permanent. Spread over vast areas as radioactive atmospheric dust, its contamination causes virtually all known illnesses and diseases from severe headaches, muscle pain and general fatigue, to major birth defects, infections, depression, cardiovascular disease, and many types of cancers. It also causes permanent disability and death.

Over the past two decades in Iraq alone, hundreds, perhaps thousands, of tons have been used, irradiating the entire country, some areas more than others. In his October 2009 presentation to the Kuala Lumpur, Malaysia International Conference to Criminalize War, Azzawi accused America and Britain of:

"subject(ing) the whole nation of Iraq for two decades to torture and slow death through the intentional use of radioactive weapons and the sanctions. The continuous and intentional use of (these) weapons is a crime against humanity due to its undifferentiating harmful health effects on civilians in contaminated areas tens of years to come after the military engagements." Radiation, in fact, is permanent, affecting unborn generations like living ones. 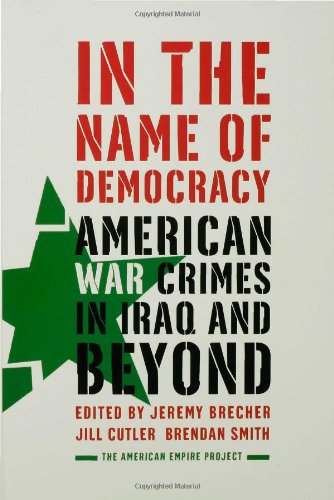 During the Gulf War, about 320 tons were used in southern Iraq, affecting the Basrah region. Post-conflict, "comprehensive" examination detected it, especially "in and around Al-Basrah City," showing:

Contamination was widespread, affecting at least "45% of people in the area, the Iraqi troops, and" coalition ones. As a result, soldiers (and civilians) exposed "to DU oxides (can expect) 70 cancer cases per 1,000" persons. Perhaps a higher incidence over time, and along with other illnesses and diseases, an epidemic of human affliction.

Subsequent epidemiological studies in Basrah showed a "five times rise in the incidence rate of malignancies amongst children to be far more noticeable from 1995 onwards." In addition, exposure to ionized radiation caused:

Even more destructive weapons were used in the 2003 war, including banned ones like napalm, white phosphorous, cluster bombs, and greater amounts of DU – "against people, infrastructure facilities, and environment." Further, "the looting and burning of factories, industrial complexes, laboratories, and ministries (including the looting of the Tuwaitha Atomic Energy Agency, and 300 other highly contaminated sites….)" caused contamination.

The continuous use of DU weapons in heavily populated areas exposes millions to its destructive effects. Further, "Continuous negligence of medical care systems, hospitals, and the killing of prominent medical and healthcare specialists….after 2003" exacerbated a widespread health crisis.

Yet occupation forces provide no data on civilians killed, wounded, kidnapped or otherwise harmed. Nor do they allow "exploration programs to detect (DU) related contaminated areas." Yet they’re vitally needed to "help Iraqi people….cope with the damages."

The "Multiple impact of all of the above pollution sources on the human body can be critical, especially for children, women and the elderly people."

America and Britain are responsible "for exposing a whole nation to the risk of continually receiving high radioactive and toxic persistent contaminants," including DU and many others, a noxious brew leaving no one untouched and many lethally harmed. "This is a crime against humanity (because of) its undifferentiated harmful health impacts on civilians long (after) military operations" are concluded.

In Iraq today, "killing of innocent people has become part of daily life." America is committing genocide against the entire population. It persists daily unreported, yet called "a success."

It includes death, destruction, torture, terror, occupation, displacement, disease, and insecurity in a nation that no longer exists. For sure, one unfit to live in – unsafe, corrupt, terrorized, tyrannized, contaminated, and permanently occupied. In virtually all rankings that matter, Iraq scores last, Afghanistan second last, a testimony to America’s liberating values.

They’re run from Washington with no functioning governments, de facto satraps instead obeying their imperial masters. Yet on August 31, declaring an "end to the combat mission in Iraq," Obama outrageously said: "Through this remarkable chapter in the history of the United States and Iraq, we have met our responsibility," infamously displaying his culpability as a war criminal, matching the worst America ever produced.

Under him, George Bush, and their successors, "Iraq has no viable future," Adriaensens’ final assessment of America’s "success."