by Richard (Rick) Mills Ahead of the Herd

As a general rule, the most successful man in life is the man who has the best information

In the time of the ancient Babylonians – long before the periodic table – there were seven sacred metals: gold, silver, copper, iron, tin, lead and mercury.

In Roman and Greek Mythology, the First Age was called Golden, the Second Age Silver. Apollo, the god of truth and light, and teacher of medicine, carried a silver bow.

The hieroglyph of Isis (Egyptian moon goddess) is a crescent and images of her are usually reproduced with her standing on the Crescent. This has also become the symbol for silver – on old maps a crescent shows the location of a silver mine.

Islamic alchemy gave silver an important place, alchemical procedures were defined in terms of silver – the silvering of other metals, the act of giving other metals silver like qualities.

We’ve long practiced the science (metallurgy) of separating silver from lead – the earliest known workings of any significant size were those of the pre-Hittites of Cappadocia in eastern Anatolia, the first sophisticated processing of lead-silver ore was attributed to the Chaldeans around 2500 B.C.

Silver metal was recognized as more precious than gold when bartering in ancient Egypt – this recorded as early as 930 BC. Silver’s use as money in coin form began around 2600 years ago. The Lydian (present day Turkey) Trite is considered by many experts to be one of the first coins used as money. It was made of “Electrum,” a silver and gold mixture. Egyptian silver in coin form began appearing around 300BC.

Silver and gold have stood the test of time, as a medium of exchange, a storehouse of value and a safe haven in times of turmoil.

The history of fiat money has always been one of failure (most paper money economies downfall can be linked directly to the costs of financing out of control military growth and its wars). Every fiat currency since the Romans started diluting the silver content of their denarius has ended in devaluation and eventual collapse of both the currency and of that particular economy.

The Federal Reserve first issued its debt based paper money in 1913. Since then the US dollar has lost 95% of its value.

In this author’s opinion silver has a few unique twists:

Firstly as a much cheaper precious metal silver is winning market share from gold buyers. The higher gold prices go the more consumers will step down to silver, more so if they think silver’s price will rise substantially.

Historically the ratio has been 15:1

Silver, like gold, also performs its function as a precious metal – acting as a storehouse of value and a safe haven in times of turmoil – although, and herein might lie the opportunity, silver seems to have been asleep on the job what with the historical gold:silver ratio being so out of whack. 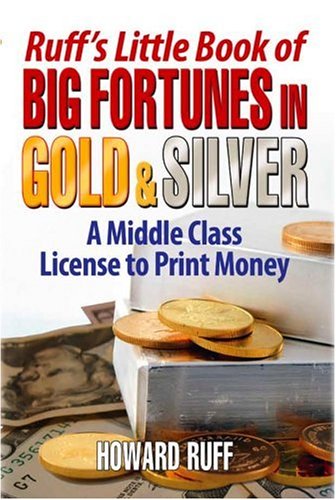 Gold does seem to be performing admirably and in this authors opinion does not seem set to significantly drop in price any time soon, the Dow on gold’s terms:

Secondly silver is an industrial metal/commodity which, unlike gold, is consumed, therefore giving you a call on an economic recovery.

“Silver is a unique metal that wins whether the economy is going well or is in bad shape. In the latter, the investor buys it as a hedge against the downturn in the economy and the markets. And if the economy improves, then the industrial demand increases.” ~ Chintan Parikh, CPM Group commodity analyst

The bottom line? Silver gives you a nice double play with prices expected to perform well no matter what the prevailing economic or geopolitical conditions.

Third silver does not have the threat of much publicized Central Bank and IMF sales constantly overhanging it – although silver does seem to trade in lockstep with gold when this old bogey man is trotted out to the herd.

In this authors opinion, it’s not if, but rather when, the gold:silver ratio will revert to a more traditional number and share price upswings will trickle down to the very few junior silver producers, the soon to be producers, developers and explorers. It’s for these reasons that silver and silver junior precious metal company’s should be on every investor’s radar screen.

Are they on yours?

Reprinted with permission from Ahead of the Herd.

Legal Notice / Disclaimer This document is not and should not be construed as an offer to sell or the solicitation of an offer to purchase or subscribe for any investment. Richard Mills has based this document on information obtained from sources he believes to be reliable but which has not been independently verified; Richard Mills makes no guarantee, representation or warranty and accepts no responsibility or liability as to its accuracy or completeness. Expressions of opinion are those of Richard Mills only and are subject to change without notice. Richard Mills assumes no warranty, liability or guarantee for the current relevance, correctness or completeness of any information provided within this Report and will not be held liable for the consequence of reliance upon any opinion or statement contained herein or any omission. Furthermore, I, Richard Mills, assume no liability for any direct or indirect loss or damage or, in particular, for lost profit, which you may incur as a result of the use and existence of the information provided within this Report. Richard Mills does not own shares in any company mentioned in this report and none are sponsors on his website aheadoftheherd.com.

The Best of Richard (Rick) Mills

Does the Golden Rule Apply to Muslims? Cold War Origins of the CIA Holocaust