The White House Orders a Forgery

I’ve decided to post a partial transcript of one of a number of taped conversations in which Rob Richer and I discussed, on the record, the Habbush letter. We discussed it many times through the spring of 2008.

Rob Richer received a copy of The Way of the World on Monday night, August 4, the day before publication. On Tuesday, he said he had read key portions of the book and was comfortable with what they contained. Later that day, though, he issued the following the statement:

"I never received direction from George Tenet or anyone else in my chain of command to fabricate a document from Habbash as outlined in Mr Suskind’s book."

The conversation below took place in June 2008. As in all of our conversations, it shows Rob pressing to get at truth and embrace probity.

This posting is contrary to my practice across 25 years as a journalist. But the issues, in this matter, are simply too important to stand as discredited in any way.

. . . Ron Suskind: I know we’ve talked through these things eight ways to Sunday, and hour after hour, but here’s what I want you to ask yourself. Prior to me jogging your memory, okay – forget Habbush part one, okay. 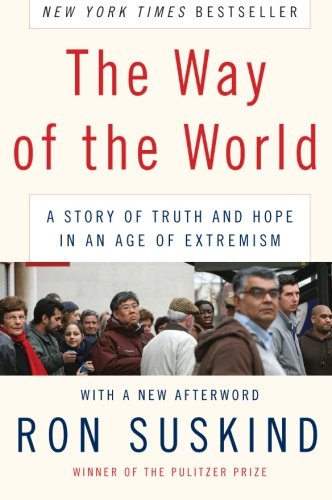 Ron: You know, the prewar stuff, cause there’s zillions of people in on that part. And there’s people in on the second part, too. But here’s my question to you: before I, as I said, before I jog your memory on this stuff, what do you – and I think I have a good idea, cause I’ve asked you this seven different ways, but I just want to make absolutely sure – what do you remember? If I just grabbed you on the street and said what do you remember of the second part, okay – with the letter and all the rest – what would be the high marks in terms of what you – memory’s the best editor I think’s a line from Tennyson –

Ron: What were the parts that you remember most vividly?

Ron: No, I’m talking about the second part, with the letter being passed from – through George [Tenet] and down the ranks. Cause at one point – and I know we have recollections at the top and that’s fine – you have recollections, not from me but from your own memory on that –

Rob: Let me tell you what I know, just so before you color any of it. Is that when you first asked me about it I remember just really telling you that it was a non-event, and if you were to ask me today I would tell you it was a non-event. It came down from the seventh floor. It was part of – as I remember it, it wasn’t so much to influence America – that’s illegal – but it was kinda like a covert, a way to influence Iraqis.

Rob: To characterize it right, I would say, right: it came to us, George had a raised eyebrow, and basically we passed it on – it was to – and passed this on into the organization. You know, it was: ‘Okay, we gotta do this, but make it go away.’ To be honest with you, I don’t want to make it sound – I for sure don’t want to portray this as George jumping: ‘Okay, this has gotta happen.’ As I remember it – and, again, it’s still vague, so I’ll be very straight with you on this – is it wasn’t that important. It was: ‘This is unbelievable. This is just like all the other garbage we get about . . . I mean Mohammad Atta and links to al Qaeda. ‘Rob,’ you know, ‘do something with this.’ I think it was more like that than: ‘Get this done.’

Is Gold a Bubble?Arizonans Dare to Defy the Feds Again!