During the so-called McCarthy Era, Frank Chodorov — an Old Right individualist of the Jeffersonian school — offered a simple and effective solution to the problem presented by Communist infiltration of various federal agencies: “The only thing to do, if you want to rid the bureaucracy of Communists, is to abolish the bureaucracy.”

Despite — or perhaps because of — the fact that this prescription would have worked perfectly, it has been resisted by most conservatives, from that era until the present, who have seen nothing wrong with expanding the power and reach of government agencies as long as they were in the “right” hands.

Statist conservatives rarely if ever advocate “the dismantling of the public trough at which these [Communist-aligned] bureaucrats feed,” Chodorov pointed out, because “[t]hey too worship Power.”

Like the properly despised Communists, the conservatives described by Chodorov subscribe to Lenin’s dictum that the central political question is “who does what to whom.” This is why Chodorov referred to the various counter-subversion investigations as “heresy trials” in which the question “Are you or were you a member of the Communist Party?” actually “turns out to mean, have you aligned yourself with the Moscow branch of the church?”

Chodorov’s insights come irresistibly to mind as I read and listen to conservative jeremiads over the impending end of the Pentagon’s “Don’t Ask — Don’t Tell” policy regarding military service by homosexuals.

Since the constitutional confederacy we supposedly inherited is not supposed to be burdened with a standing army, why are we even discussing the question of whether homosexuals should be permitted to serve in the same?

The kernel of Chodorov’s insight, it seems to me, is this: Conservatives tend to bemoan what is being done to various federal agencies when they should focus instead on whether they should exist in the first place. It’s for this reason that conservatives are scandalized over what the Gay Lobby wants to do to the military, when the real outrage is what is being done with it — or whether that immense, costly, and destructive federal bureaucracy should exist, at least in its current form.

Typical of the misguided approach taken by statist conservatives are the following exceptionally wrong-headed comments offered by a reliably foolish commentator:

“Would a parent possessing fundamental morals and religious values stand by and allow a son or daughter to enlist in today’s military? The answer is no and, because of the situation that already exists [meaning, presumably, the acceptance of homosexual enlistees under “Don’t Ask, Don’t Tell”], the military is being denied a source of the type recruit that all services want and that have always regularly been filled in the past.”

A more cogent formulation would be the following:

Given that the U.S. military — an instrument of mass destruction controlled by the imperial clique ruling our country — has become a greater force for evil than the Red Army was in its prime, what parent possessing a scintilla of common sense and even a particle of moral wisdom would permit his child to enlist?

Would the lives of children brought up in homes defined by “fundamental morals and religious values” somehow be incomplete if they were deprived of the opportunity to kill and tyrannize the hapless residents of countries that have done ours no harm?

Like many other conservative pundits, the fellow quoted above suggests that integrating open homosexuals into the military would defile an otherwise morally upright — nay, sanctified — institution. Since that gentleman served in the Marines, he’s aware of the fact that the military is not composed of people who have taken vows of celibacy and otherwise committed themselves to lives of pristine self-abnegation. That’s one reason why practitioners of the world’s oldest profession are often known as “camp followers.”

There are much worthier pursuits for capable, idealistic children brought up in Christian homes. Serving people abroad as a missionary on behalf of the Gospel (as distinct from promoting the interests of various ecclesio-Leninist corporations called “churches”) is an option that offers considerable opportunities for adventure untainted by bloodguilt.

Furthermore, capable young men who choose to become missionaries rather than armed enforcers in the employ of the Power Elite don’t run the risk of being required to do terrible things — only to find themselves being prosecuted by the war criminals who cut their orders. (By way of an infuriating example of how this works, I cite the case of Evan Vela Carnahan, the step-son of a good friend of mine from High School.)

People in the business of killing, we’re told, are permitted to “blow off some steam” by indulging in behaviors that might seem a little off-putting to people who espouse “fundamental morals and religious values.” 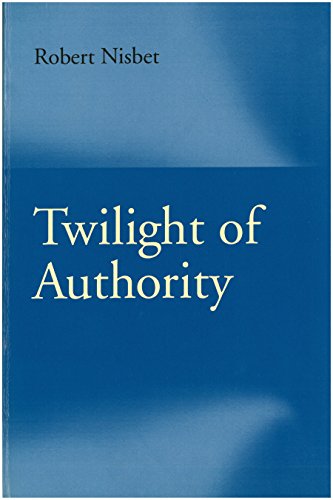 In his 1975 book Twilight of Authority, The late Robert Nisbet, an authentic conservative of the non-statist variety, wrote that there is “a good deal in common psychologically” between the kind of soldier who earns various battlefield commendations “and the kind of individual we label psychopath in civil life.” Through the practice of “licensed violence” the military transmutes criminal behavior into “heroism.”

“But there is a different kind of licensed immorality that comes with war, and that has still wider appeal inasmuch as it exists on the home front as well as in garrison and on the battlefield,” continued Nisbet. “I refer to the whole area of sexual conduct…. It was under the steady impact of the Roman Republic’s wars, first foreign, then civil as well as foreign, that the destruction of the Roman family system gradually began…. The great wave of immorality that hit Roman society in the first century B.C., so well attested to by contemporary essayists, and that the Emperor Augustus strove valiantly to terminate through laws and decrees, had its origins in war.”

“What is in the first instance licensed, as it were, by war stays on to develop into forms which have their own momentum,” he concludes.

Rather than encouraging their children to enlist in the military, parents concerned about preserving traditional morality should do everything they can to minimize their children’s exposure to the institution.

As Dr. Allan Carlson of the Howard Center points out, the United States military could be considered the single greatest source of cultural subversion in American society. It is, in his phrase, “an engine of social change,” including radical alterations of conventional mores and the structure of the traditional family.

Dr. Carlson observes that between 1941 and 1972, “over half of all American males served in the active-duty armed forces” — an unprecedented state of affairs. During that same period, the state grew immeasurably in terms of both size and intrusiveness, and the “fundamental morals and religious values” of American society came under relentless attack. Carlson makes a compelling case that these developments are intimately related.

“When one examines the military’s role in stimulating government action or innovations that later become institutionalized, the effect of war in driving social revolution grows evident,” maintains Dr. Carlson. U.S. involvement in World Wars I and II did a great deal to foment the Sexual Revolution. Writing in 1993, Carlson described “Don’t Ask — Don’t Tell” — “Bill Clinton’s contemporary efforts to use [the military] for a new kind of experimentation” — as merely the latest manifestation of ongoing institutional efforts by the military to undermine the conventional family structure.

It is the military’s usefulness as an engine of compelled cultural change that has long made it an attractive target for those who follow Antonio Gramsci’s design for social revolution.

Since he died long before Gramsci was born, James Madison wasn’t familiar with that revolutionary theorist’s concept of the “war of position” and the use Gramsci’s disciples would make of a large, lavishly funded standing military. Had he been given foresight to anticipate this particular use of the military, Madison most likely would have added it to his justly famous indictment of the warfare state as the most fearful enemy of liberty.

In addition to undermining the corporate morality of an entity charitably described as amoral, homosexual integration of the military would promote “the acceptance of other fundamental departures from military discipline and the proper function of the military,” complains the conservative commentator cited above. “Moral relativism, a feature of homosexuality, spawns the attitude that all military orders and practices are relative and not to be acted upon swiftly or carried out without question.” (Emphasis added.)

Does he really mean to suggest that “all military orders” are “to be acted upon swiftly [and] carried out without question”?

Is it his opinion that permitting homosexuals to serve openly in the military would undermine the institutional discipline needed to continue fighting undeclared, illegal wars of aggression abroad?

Would homosexuals infect the military with a virulent strain of “moral relativism” that would make it less effective as an instrument of domestic regimentation if and when outright martial law descends upon our country?

Are we to fear that the end of “Don’t Ask, Don’t Tell” would hinder military efforts to confiscate civilian firearms here, employing methods that have been used (with varying levels of success) during occupations of Somalia, Haiti, Bosnia, and other countries?

Should we strive to make sure that the ranks of military torturers are kept free of homosexuals, lest their valuable work become morally suspect?

This second objection focuses, once again, on what is done to, rather than by, the military. But this one is even more pernicious in that it is rooted in defense of an indefensible moral assumption — a variant on the discredited “Nuremberg Defense.”

Were he with us today (and his absence is keenly felt) Frank Chodorov might point out that militarist conservatives and their leftist counterparts champion a monolithic military establishment because they all worship power. A military that acts in strict obedience to constituted authority is more susceptible to top-down subversion.

It is precisely the tendency of military personnel to act on orders swiftly and without question that makes the military so attractive to those who wish to reconfigure American society. And as Nisbet pointed out, it’s hardly a coincidence that the cultural onslaught against conventional morality has escalated dramatically since U.S. involvement in the two world wars and the creation of the National Security State in 1947.

Traditionalists are understandably concerned about the damage that results when the military becomes a tool of radical social engineering. But they are so bewitched by appeals to nationalist and jingoist impulses that they fail to see the central role of the military establishment in fomenting the social changes they deplore. This isn’t a problem we would be dealing with if we didn’t have an immense standing military with a global license to meddle and an increasingly visible role in domestic policing.

Given all of this, we really should apply the Chodorov Principle: Rather than trying to sanitize an armed bureaucracy that really shouldn’t exist, why don’t we abolish it?

Previous article by William Norman Grigg: This Is a Man

More Spending Is Always the Answer Secession Is In the Air