When a Saccharine Economy Turns Sour

We’re in a real economic pickle.

I attribute the size of the problem to a life-long period of confusion over property ownership caused by fractional reserve banking. No one alive today was old enough to grasp, first-hand, what happened the last time too many claims on individual assets were sorted out. This is exactly what occurred in the 1930s when many bank depositors, home owners and owners of plants and equipment discovered that they didn’t actually control those assets they believed were theirs.

According to my vastly oversimplified version of Austrian Business Cycle Theory, the credit-induced boom phase of the 1920s allowed people to think they could have their cake (bank deposits, for instance) and eat it too (loaning it out for consumption).

The "eat it too" would be true only if each dollar of deposits was loaned out. In fact, ten times or more of those deposits were loaned out, so people believed their cake (money) was safe in the kitchen (bank) when in fact they and their neighbors had feasted on (and paid for) what they believed were ten cakes.

How sweet it was. The cake bakers loved it.

The trouble was that this game lasted only as long as people collectively believed in it, and that required a whole lot of blind optimism.

People are moody, however. A sweet social mood, like a tree, does not grow to the sky.

When social mood soured and people wanted to exercise more direct control over their property, they discovered that only a few people, the very first in line, actually owned something. Everyone else discovered that the "eat it too" phase had consumed their "cake."

The illusion was gone.

This was the condition in the 1930s. Nominal value disappeared as claims were sorted out, resulting in price deflation as extra, ephemeral claims on assets evaporated. Many people got poorer. 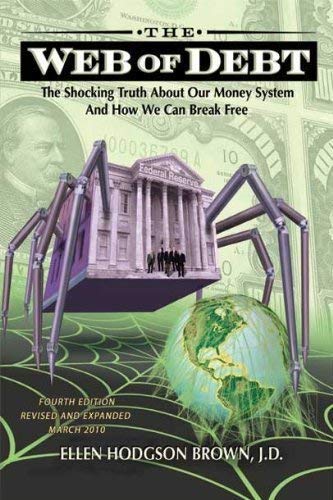 Bank depositors believe they own their money when in fact it has all been loaned out. Who among bank depositors wished, explicitly, to be in the business of loaning their money to people to buy big screen TVs, Harleys and overpriced McMansions? Depositors are deluded, in part by deposit insurance, believing that their money is "there" at the bank, withdraw-able at any time. Of course, this is not remotely true.

Who among those carrying a mortgage honestly believes he or she owns nothing, not one brick or board until the final payment is made? No, even those owing more than their home’s current market value still think of themselves as "home owners."

In simplified form, banks loan out ten times the nominal value of their deposits. Those deposits are not multiplied, that’s impossible. Deposits represent productivity, and productivity can’t be created with a computer keystroke. Consumption cannot precede production.

All that occurs is that multiple claims are created for the same underlying productivity, thereby diluting the real value of the deposited productivity. Some of those claims go into demanding new productivity via price increases for consumer goods or the murderous crap bought by Uncle Sam.

These new bank deposits are cycled again into multiples of nominal demand, more industrial expansion, more jobs, and more bank deposits, but it’s all built on metastasizing claims on the original productivity.

What happens when the cascade of claims begins to unravel, and each job created by such a claim turns out to be an illusion?

This cycle has spun since the late 1930s, and was turbocharged in 1971 when Nixon broke the last vestigial limit on its operation. The inverted pyramid of artificial economic activity and artificial bank deposits was then limited only by the boundaries of mass human psychology, boundaries now operating without any guideposts whatsoever.

What constitutes original, real productivity on which this inverted pyramid of claims rests? How much real value, not the multiple holograms of it loaned via fractional reserve banking, underlies the entire mountain and who ultimately owns it?

This is one question that will be answered by the chaos accompanying a souring mass social psychology.

The real tragedy coming is that an unknown but vast number of people are engaged in occupations sustained only by these illusions. As all the extra claims on the seeds of the credit system prove unenforceable, demand born of multiplying claims on the same asset will disappear, taking with it the jobs in industries so supported, then the bank deposits of money from those jobs, and so on. Massive feedback loops of contraction must occur across all economic subunits.

We should expect this contraction to be widespread but uneven, with industries most amplified by the credit cycle to be the most affected.

Capitalism properly understood cannot operate in an environment where property ownership is not explicit. A fractional-reserve, debt-based money system guarantees delusional booms born of multiplying claims on the same asset and, if the boom lasts long enough, industry segment collapses when the process of sorting out those claims inevitably occurs. Critics of capitalism thus falsely attribute to it problems that actually arise from crucial anti-capitalistic policies.

Fractional reserve banking and debt-based fiat money are defended on the belief that they raise the rate of economic growth, a conclusion based on "broken window fallacy" logic and the short-term (75 years or so) gains that still, temporarily appear so real.

This is tantamount to juicing an athlete with crystal meth and, for the duration of his amplified performance, claiming great success in achieving his record-breaking prowess. As with democratic rulers (and their economist-soothsayers) everywhere, only the now matters, not the athlete’s future collapse.

Sadly, the policy-makers with whom we are afflicted (like fleas on a dog) will learn nothing from their player’s collapse. They will learn nothing because we learn nothing. When sweet optimism reigns, there is always a large constituency that will accept a saccharine economy juiced with crystal meth credit. When the artificially-enhanced sweetness turns sour, though, even our best-laid plans will require us to endure the ensuing period of bitterness.

The Big Question: How Close Have We Come to Knowing the Precise Value of pi?The Coming Food Shortage