US Dollar Is Getting Trashed

…where earnest men and women toil long hours in glass towers. What are they doing?

"Look at this chart," they tell clients. "It shows how much you can expect to make at different risk levels. And see this curve? It is what we call the ‘efficient frontier,’ where the risk/reward relationship is optimized by proper asset allocation."

"Wow," you say. "You must have some pretty smart cookies working for you." 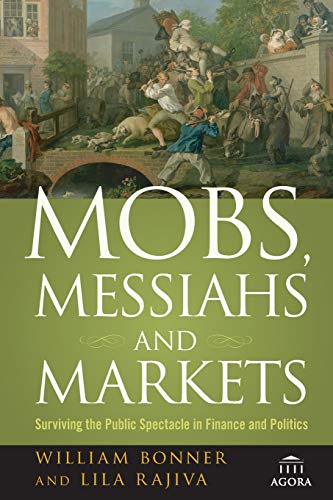 "Well, we do our best," says the young man, modestly.

In a normal economy, "finance" performs a useful function — helping to match up people who have capital with people who need it. But even when it is on the level, the profession is full of bombast and flimflam.

Those numbers, presented so confidently to customers, were 9/10ths smoke and 1/10th mirror. The new book by Rogoff and Reinhart confirms a point made by our friend Nassim Taleb: both the theory and practice of modern portfolio analysis were flawed. The theory was flawed because people are not reliable. They don’t always react in the way their models predict. What they did in the past may or may not be what they do in the future. And the practice was flawed because the past that the number crunchers looked at was limited to the last 25 years; it was the period since 1980, for which they had the figures! In other words, their models were based on numbers only from the boom years.

The US dollar is getting trashed, Strategic Short Report’s Dan Amoss tells us.

The greenback "is increasingly being viewed as a "funding" currency in the carry trade," Dan continues.

"In other words, leveraged speculators are borrowing US dollars in the short-term money markets at near-zero rates to buy bonds in higher-yielding currencies like the Australian dollar or the euro. If this trend remains in place, it will continue to drive down the exchange rate of the US dollar, and drive demand for gold up.

"This trashing of the dollar is not bullish for America as a whole. It’s dangerous for the viability of the middle class. It’s good for exporters of agricultural products, specialized manufactured products, and energy producers, but bad for everyone who pays for lots of imported products, or imports that are incorporated into the supply chains of businesses that sell to US consumers.

"I think this claim that ‘a weak dollar is good for exports’ is narrow- minded and misleading. It ignores the fact that a weak dollar would drive capital out of the US, into economies that are paying a real return on their currencies."