“That’s easy. Each of us will shoot twice, and go home.”

~ A reported conversation between a German and a Swiss diplomat, circa 1939

Seven hundred years ago, when Switzerland was under the domination of the Hapsburgs, a dissolute colonial overlord named Hermann Gessler sought to humiliate the residents of Altdorf, the capital of the central Swiss canton of Uri.

Gessler instructed his minions to erect a tall pole in the town square, at the top of which would be displayed his cap. Every Swiss man who entered the square would be required to pay fealty to Gessler, and the foreign imperial power he represented, by bowing before his cap.

One local resident was a man who distinguished himself by both his virtuosity with a crossbow and his contemptuous hostility toward bullies. Trying to force him to genuflect before another man, let alone his empty cap, would be a bit like trying to relocate the Matterhorn one shovel-full at a time. So while others prostrated themselves before Gessler’s headwear, William Tell stood erect, burly arms folded across his broad chest, slowly shaking his head as his derisive laughter echoed through the town square.

Tell’s defiance became known to Gessler, as did his reputation as a marksman. The Hapsburg stooge was worried about the possibility of Tell’s rebellion becoming contagious. Endowed with the vicious creativity that so often replaces character in creatures of his kind, Gessler abducted Tell’s young son, forcing William to leave his mountain home and stand before him.

Gessler told Tell that his son would be placed in the town square with an apple atop his head. Tell was placed at a considerable distance from his son and told that he was to shoot the apple from his child’s head; failure to do so on his first shot would bring about the death of his son at the hands of Gessler’s soldiers.

According to the legend, Tell hesitated not at all in fitting an arrow to his crossbow and letting fly, cleaving the apple without harming his child.

Tell’s feat, and the composure with which he carried it off, were sufficient to impress even the porcine, self-enraptured Gessler.

As Tell collected his son and turned to leave, a second arrow fell from his coat. Noticing this, a puzzled Gessler asked Tell why he’d bothered to grab a second arrow, since the first shot would either have succeeded or brought about the death of his son.

Fixing the despot with an unflinching stare, Tell replied: “That second arrow was for you, if the first had wounded my boy.”

Not long afterward, Tell’s second arrow found its intended destination as Tell and his countrymen rose up against the foreign occupation, leading to the eventual creation of the Swiss Confederacy in the late 13th Century.

Owing to its tradition of resolute individualism, the unexcelled marksmanship of its citizen militia, and its decentralized political system, the Swiss have managed to avoid entanglement in the affairs of other nations and preserve their independence from foreign domination. 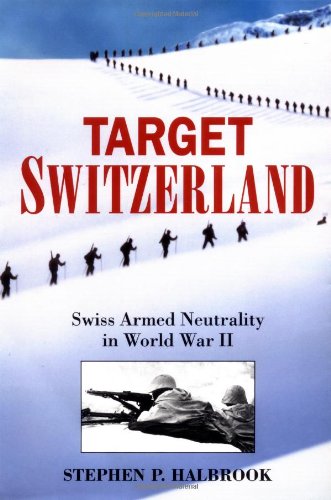 Efforts have been made to break Switzerland to the saddle of “internationalism”: In 1798, the French revolutionary army invaded and occupied Switzerland, inflicting on it a centralized “Helvetic Republic” that lasted five years.

In 1939, as recounted in Stephen P. Halbrook’s book Target: Switzerland, the German military drew up plans to invade and occupy Switzerland in the mistaken belief that its citizen militia would be no match for the Wehrmacht.

Under the leadership of Colonel Henri Guisan (at the time, it was the tradition that no officer would be appointed “general” unless the country actually went to war), the militia prepared a strategy called the “national redoubt”: In the event of a German invasion, the militia would retreat into a series of fortified installations in the Alps and wage unremitting guerrilla war for as long as it took to drive the invaders from their land.

Confronting the prospect of fighting an entire country under arms, and horrified by the price that would be paid to pry the Swiss militia from its Alpine redoubts, the German High Command decided to leave Switzerland alone. What this means, of course, is that Switzerland actually won its war without suffering the hideous losses inflicted on any of the combatant nations.

A decade ago, another campaign — this one more subtle than threats of military occupation — was mounted to destroy Swiss independence. Beginning in 1997, Switzerland, which rescued tens of thousands of Jews from the Holocaust, was besieged by spurious claims that its renowned banking system was hoarding gold stolen from victims of the Nazis.

Stories were put into circulation describing the cynical heartlessness of banking officials in turning away aging survivors of Nazi cruelty; those stories invariably proved to be as substantial as cotton candy and as reliable as Jim Cramer’s investment advice.

Nonetheless, a global campaign of defamation and invective, spearheaded by the coprogenetic Edgar Bronfman Sr. and eagerly abetted by the Clinton administration, indelibly branded the Swiss as Holocaust profiteers, thereby setting the stage for a shake-down that continues to this day.

No matter that on three prior occasions — in 1946, as a result of the post-WWII Washington Accord; in the mid-1950s; and in 1962 — the Swiss banking industry had conducted comprehensive, diligent, and transparent investigations regarding its wartime gold holdings.

Nor did it matter that the Clinton administration’s inquiry actually exonerated the Swiss of claims that they had hoarded “victim gold” stolen from Jews who suffered and perished at the hands of the Nazis. The defamation campaign succeeded in prying some $14 billion worth of gold from the Swiss treasury and — more importantly — inducing the Swiss electorate to enact a new constitution that (among other dreadful features) repudiated the link between the Swiss franc and gold.

The Imperial Regime in Washington apparently believes it has reduced the heroic Swiss to a state of subservience, because its most recent demands savor of the same arrogant, unwarranted self-assurance that led Herr Gessler to place his hat atop the pole in Altdorf’s town square.

Last year, Washington tried to impose a $780 million fine on the Swiss for their refusal to enforce U.S. tax laws within their own country.

Next week, the Regime intends to press its claims in court — that is, in its own courts — in the hope of forcing the Swiss to turn over confidential information on some 52,000 Americans who have private accounts protected by Swiss law.

To their eternal credit, and the benefit of those who cherish freedom everywhere, the Swiss are responding to Washington’s imperial bullying with the equivalent of William Tell’s laughter, augmented by an upraised middle digit.

Earlier this year, the Swiss People’s Party (SVP) began a campaign urging their fellow citizens and elected leaders to resist Washington’s imperial blackmail. After the Swiss government capitulated in late February to Washington’s demand to pay a $780 million fine and disgorge the names of Americans who had opened private banking accounts, the SVP — the nation’s largest political party, which combines traditionalist populism with enticing hints of libertarianism — angrily demanded the repatriation of Swiss gold stored in the Swiss National Bank in the U.S.

The party also demanded a ban on the sale of U.S. commercial and government bonds in Switzerland (a sound proposal, if only because the sale of fraudulent financial instruments is a crime), an end to the Swiss government’s role as a diplomatic intermediary between Washington and various national governments disinclined to act as U.S. colonies, and a refusal by Geneva to help Washington free itself from the tar-baby it created at Gitmo by taking in detainees freed from the detention facility.

Not everything about the SVP is entirely commendable, but in mounting this pressure campaign it was acting squarely in the noble tradition of William Tell and Henri Guisan. And the party’s efforts may have helped the Swiss political class regain its backbone and virility: The Swiss government has announced that it will forbid UBS AG to comply with any order from the US central government requiring it to surrender confidential banking information — and that Swiss authorities would seize that information, if necessary.

Already, major Swiss banks have announced that, of necessity, they will no longer accept American clients because of disclosure and paperwork requirements being pressed on them by Washington’s commissars for international wealth extraction.

These extraordinary measures, notes Bill Bonner, are being undertaken by Swiss officials in order to preserve their country’s traditional role “as a protector of foreigners’ money.” To that end, as well as the protection of its own citizenry and their economic interests, the Swiss are “sharpening their knives and tightening their borders,” Bonner writes. That is to say, they seem to be recovering a hint of the intransigent patriotism that led them to evict the Hapsburgs, throw of Bonaparte’s yoke, and stare down the Wehrmacht.

Washington, the focus of evil in the modern world, is displaying the behavior we would expect terminally corrupt collectivist kleptocracy: It needs revenue to satisfy its retinue of parasitic constituencies, has the power to seize it in defiance of the law, and believes that all people everywhere should genuflect before its demands. It is behaving pretty much the way Gessler did before he was brought down by Tell’s second arrow.

Wouldn’t it be delicious if Switzerland’s resistance proved to be the precipitating event that brought down Washington’s wretched empire of debt and deceit?

Previous article by William Norman Grigg: A Covenant With Death