A Covenant With Death

We have made a covenant with death, and with hell are we at agreement; when the overflowing scourge shall pass through, it shall not come unto us; for we have made lies our refuge, and under falsehood have we hid ourselves. ~ Isaiah 28:15 (KJV)

The event bills itself as the “Treasure Valley God and Country Festival,” but the nation-state played the starring role — albeit an officially un-credited one — in the four-day event that recently took place in Nampa, Idaho.

As was the case at Fourth of July commemorations throughout the United State (spelling intentional), the God and Family Festival displayed all the trappings of a contemporary Christian worship service while channeling devotion toward the government ruling us, particularly its most potent instrument of lethal coercion — the military.

Nampa’s annual event was created by the actor (and two-sport professional athlete) Chuck Connors (no kidding) during the Vietnam conflict as a way of honoring veterans of that exceptionally foolish and unnecessary war. This year’s edition was distinguished by the signing of a Pentagon-produced document called a “Community Covenant.”

Various state and local political figures affixed their signatures to the document, which will eventually be displayed in the Governor’s office. The purpose of this ritual is for communities to “do a public display and acknowledge support for the military,” explained an Army officer to the Idaho Statesman. Since the document was created by the Secretary of the Army in 2008, it has been publicly endorsed by the political leadership of dozens of “communities” — both cities and states.

The document unblushingly refers to “America’s Army” as “The Strength of the Nation,” and calls upon those residing in “covenant” communities to help build “the strength, resilience, and readiness of Soldiers and their Families,” and to help implement “the Army Family Covenant.”

It’s worth noting here that the choice of the term “covenant” — a term with profound and even sacred connotations for those steeped in the language of Scripture — was no accident. It was almost certainly the product of expensive and detailed opinion sampling by people adept in manipulating language and images in order to seduce unwary but otherwise decent people into suspending their capacity for critical thinking.

That second “covenant” gives some substance to the hortatory language of the first by enlisting “covenant” communities as lobbyists on behalf of military benefits — health care, housing, educational programs, child care, and so on.

Idaho is the reddest of the Red States, populated by industrious people who are expansively skeptical of government power unless it is deployed in the cause of murdering foreigners and occupying distant countries.

Many of the people who attend this year’s God and Country Festival will arrive at the event in SUVs whose stereos resound with talk radio harangues denouncing the expansion of the welfare state under Obama. Yet those same people are blind to the ironic fact that the government institution they uncritically adore, the United States Military, has been the greatest factor in the growth of the welfare state.

As Bruce D. Porter explains in his valuable book War and the Rise of the State, each American military conflict, beginning with the War for Independence, has expanded the domestic power and redistributive reach of the government through what he calls “Titmussian linkages” between veterans and their dependents on the one hand, and the central government on the other.

That somewhat inelegant phrase refers to the work of socialist British academic Richard Morris Titmuss, “A vigorous advocate of social welfare reforms” and, therefore, of the militarization of society in the interest of expanding the welfare state.

In fact, as Titmuss noticed and Porter points out, the very “origins” of the welfare state are found in the military. Veterans and their dependents, who are guaranteed pensions and various disability, health, and housing benefits provided the first permanent clients of the redistributionist state. The WWII-era conscription of millions of men, and the recruitment of their wives into war-related industries, led to the enactment of the first federal child care legislation.

That the military would abet the growth of a huge and ever-expanding welfare state would not have surprised James Madison, who famously denounced war as “the parent of armies; and from these proceed debts and taxes; and armies, and debts, and taxes are the known instruments for bringing the many under the domination of the few.”

What Madison lamented — the centralizing effect of war, particularly in propagating debt — the execrable Alexander Hamilton frankly celebrated. Porter points out that Hamilton was delighted by the lingering debts accumulated by the colonies (and later states) during the War for Independence; he pressed for Congress “to assume the full debts, believing this would turn the debts into a potential ‘cement’ of the Union. This, in the American case, as in the Dutch case before it, war debts helped consolidate a fractious polity by binding creditors across the nation to the fate of the central state.”

The Empire Hamilton Built is racing toward the unpleasant end that awaits all imperial projects: Incurable, undisguised insolvency, the ruin of the official currency, political collapse, and — most likely — internal schism.

At some point the Power Elite will probably call most of the troops home from their far-flung garrisons, not because our rulers will have renounced aggression, but rather for the purpose of putting down internal resistance. This, too, was foretold by Madison in the Constitutional Convention, when he warned that “A standing military force, with an overgrown Executive, will not long be safe companions to liberty. The means of defense [against] foreign danger have been always the instruments of tyranny at home.”

Dr. Porter, a Harvard-educated historian and former Senate Armed Services Committee adviser, appears to believe that one major priority of U.S. foreign policy is to supply a steady stream of foreign crises that can provide a shared “national identity” for residents of our fissiparous country.

Writing in 1994, Porter suggested that growing unrest and even separatist tendencies within the American polity may inspire attempts by the ruling elite “to solve all these problems through foreign diversion; finding or inventing enemies … against which united efforts can be directed. But unless the United States becomes embroiled in a serious war, the problem of keeping America unified in the face of profound centrifugal tensions is likely to be the political problem of the 1990s and beyond.”

Of course, the approach Porter foresaw — and which appears to have been taken by the Power Elite — accelerates the process of economic collapse and, with it, social upheaval. Which suggests, once again, that the same military establishment being exalted as a divine entity at the “God and Country Festival” and similar events this weekend may, in the not-too-distant future, be given the task of forcibly disarming and suppressing the political desires of the same people now singing its praises. 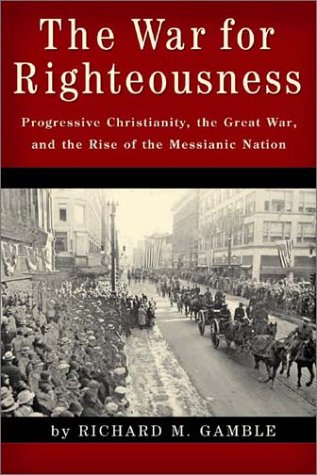 The program for the “God and Country” event briefly describes the “Roman Road” — a potent condensation of the salvation message found in the Apostle Paul’s Epistle to the Romans.

Much of the event itself, including the ritualized signing of the blasphemous, Pentagon-composed “covenant,” seems built on the assumption that the Roman Road that really matters is the Via Appia — the main thoroughfare through which Imperial Rome dispatched its armies of conquest — and that it is the duty of pious Christians to promote and sustain the Empire’s military ambitions, whatever they may be.

As Richard Gambale documents in his indispensable study The War for Righteousness: Progressive Christianity, the Great War, and the Rise of the Messianic Nation, the militarist heresy is of relatively recent vintage. It was an outgrowth of the WWI-era “Progressive” conceit that the Christian Church had to justify its existence by playing a “positive” role in the expansion of the meliorist state.

Rather than playing the time-honored role of peacemakers, the progressive clergy eagerly supported World War I “as a transforming event in the life of the church,” observes Gambale. Many of them applauded the Wilson administration’s war aims as a form of Christian “altruism,” one that promised temporal redemption “at the sacrifice, if need be, of five millions of men and billions of wealth,” as an effusive Literary Digest editorial put it.

Nor would this righteous campaign to re-make the world through state coercion cease once the shooting stopped. Writes Gambale: “The progressives longed for, and expected, the war for righteousness to continue after the guns in Europe fell silent.”

Again, one collides with an arresting irony: The most outspoken “conservative celebrations of militarism during what used to be called Independence Day promoting a view devised by the leftist Progressives of the early 1900s," what Gambale aptly calls “the rhetorical sacralization of the nation-state.”

The more pronounced our ruling elite’s apostasy from America’s republican origins, the more insistent became their invocations of our sacred national “mission” in the world. As Gambale notes, one particularly notable example was provided on September 11, 2002 by Bush the Lesser as he “appropriated the words of John 1:5 as if they described not just the Incarnation of Christ but the mission of the United States: ‘And the light shines in the darkness; and the darkness will not overcome it.'”

To the extent that any radiance attends the labors of the Regime ruling us, it is the demonic nimbus of shock-and-awe, not the divine radiance of the Shekinah. The true tragedy of our time is that so many American Christians are blind to that critical distinction.

Sell Gold, Then Buy It Many of the World's Great Investors Are Doing Exactly That Of Course, Global Warming Is a Hoax