As published in the August, 1989, issue of The American Libertarian.

The recent death of Abbie Hoffman has swiftly transformed the long-forgotten clown of the New Left into a veritable publishing industry. As one long-time member of that industry commented: "Death is hot."

Starting with the publication of Barbara Branden’s Passion of Ayn Rand in 1986, the Ayn Rand scavenger hunt has begun, with the orthodox Randians auctioning off her sacred relics. The latest entry in the Rand sweepstakes is Judgment Day, by Barbara’s ex-husband, Nathan, and unfortunately it will not be the last.

If the book makes a lot of scratch, Nathan has been threatening to publish a sequel (Son of Judgment?) consisting of allegedly juicy outtakes cropped from the current book. So, what’s next – "I was Ayn Rand’s Rational Dentist: See How She Reacted to Abscess Pressure"?

There are considerable differences, however, between Barbara’s and Nathan’s books. For one thing, Barbara focused on a legitimate topic: a biography of Ayn Rand, for all her follies an author of some stature. While Barbara’s effort was overblown and had considerable flaws, she at least tried painfully to come to terms with her experience with Rand. There is indeed in her work a considerable amount of passion.

But Nathan Branden’s Judgment Day focuses on a far less interesting or legitimate topic: the history of his own feelings in every situation in his life. I can’t think of any topic less interesting to a rational person. 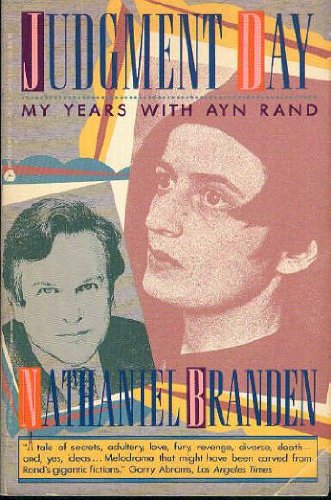 And what feelings! For a shrink, and for a man of his narcissism, Branden displays an amazing lack of self-knowledge or of insight into the people around him. For here is the allegedly mature, post-Randian Branden writing a saga of unrelieved tedium. The story of Nate the Great, a world-historical figure of our century, spending all of his life amid an endless array of shmucks, creeps, lowlifes, and assorted villains and morons. And these were his lovers and supposedly his best friends!

Growing up in Toronto, the Great One is scarcely understood by his dull and uncomprehending family. His fellow students, too, have no inkling of his greatness.

Later, he formed his buddies and subordinates into the Randian Collective, people whom at the time he proclaimed to be the World’s Most Rational Men and Women. But now he reveals what he really thought them to be: a gang of unproductive parasites, desperately trying (and obviously failing) to win his favor by adoringly telling him how he saved and transformed their lives (to which the Great One, at least in retrospect, responded with thinly veiled contempt).

During the six months that I was associated with the Randian movement (the first half of 1958, at the beginning of the RandCult), Branden once told me that his cousin and psychologist-disciple, Allan Blumenthal, was his "best friend."

Some best friend! In this tedious and repellent work, in which Branden mercilessly slams every one of his old friends and lovers, poor Blumenthal is arguably dumped on the most. Blumenthal was "prissy," a "eunuch" mysteriously surrounded by homosexuals (Hey, what’s he getting at?), his entire life dominated by malicious envy of his brilliant and wonderful cousin. And on and on it goes.

As for his lovers, "kiss and tell" hardly covers it. Poor Barbara is slammed continually – an inferior slut unworthy of the Great One. It takes very little psychological insight to figure out that Barbara, in Nathan’s eyes, committed the Ultimate Sin: not being sexually responsive to the Greatest Man of our Century.

Of all the inferior subcreatures that Nathan has been forced to deal with in his life, only Ayn Rand is judged as worthy of living on the same planet – and she, of course, was kinda crazy.

And Judgment Day doesn’t even have the virtue of first disclosing the juicy details about Ayn and Nathan’s sex life – since Barbara has already beaten him to the punch. What we are left with is a consistently nasty and squalid book, Nathan getting back at everyone. This is a book unrelieved by any flash of wit or genuine insight.

If you are going to write a nasty book about your lovers and friends, you had best have the wit and sparkle, the splendid writing style, of Truman Capote in Answered Prayers. Instead, we have a humorless thump-thump account as Branden hacks away at everyone around him.

Furthermore, Nathan’s alleged recantation of his role as Enforcer and Lord High Executioner in the RandCult sticks to pro forma generalities. Not once does he actually apologize to any person whose life he helped wreck. In fact, in one of the specific cases of expulsion (my own, pp. 259–261), Nathan presents a totally false account (see my refutation in Liberty, September), in which he reverts to the old Enforcer role of thirty years ago that he had supposedly abandoned. In any case, this incident does not give me confidence in the veracity of the rest of the book.

I know several people who started reading Judgment Day neutral or moderately favorable to Branden, and every one of them ended by virtually being ready to organize a lynch party against him. "Branden is no gentleman," one exclaimed as he finished the book. That’s of course a masterpiece of understatement. Such a concept as "honor" has no place in Branden’s lexicon.

In the old days, anyone who publicly maligned his sex partners in such a manner would have been called a "cad" and a "bounder," and would have been horsewhipped out of town. Excessive punishment, perhaps, but still.…

Another person hurled the book down at the end and exclaimed, "trashy and self-serving!" The entire book is an exercise in self-justification and glorification, as well as a condemnation of virtually everyone else. But it’s trashy too; the book is written like a bad soap opera or an article in True Confessions, except that the latter are more interesting. Nathan, for example, meets someone and invariably correctly sums up his or her character (almost always crumby) in one penetrating glance.

One of the curious aspects of Judgment Day is the Epilogue. The subtitle of the book is "My Years with Ayn Rand," and yet the Epilogue goes on and on about the mysterious death of Patrecia, wife number 2, almost ten years after Nathan’s expulsion from the RandCult in 1968. Why does he keep dwelling on the details of an event clearly irrelevant to the book?

There are many possible explanations, some more sinister than others, that have been bruited around the libertarian movement for years. Here is one possible solution to the puzzle: In my days in the movement, we kept hearing about Nathan’s plan to write one day his own Great Novel. So, just as Brahms’s First Symphony has been called Beethoven’s Tenth because it so closely followed the Master, perhaps we can treat Judgment Day as Nathan’s first, or Rand’s fourth, novel, albeit a "nonfiction" one, using real names. We could then, I suppose, excuse the falsehoods and the personal smears in the name of "art." And every reader of mystery stories knows the value of a dead body, especially of a pretty female perishing in mysterious circumstances.

But Branden is not off the hook, because Judgment Day fails even as a work of fiction. We are told many details of the death of Patrecia, for example, but other crucial items are missing. Thus, we are told such minute details as the exact time that Patrecia made her last phone call to Nathan on the day of her death, as well as the precise hour that Branden wound his way up the driveway to get to his home to find her body. And yet we are not told anything of Nathan’s whereabouts that crucial afternoon; nor are we told the details of the autopsy report.

Furthermore, we are told odd details about their watchdog, and yet it is unclear why it is important that he was found inside rather than outside the house by the authorities. And how exactly and when did Branden "trip the burglar alarm" that summoned those authorities? Inquiring minds want to know!

More broadly, the writing is monotonous, the plot is boring rather than powerful (as in the case of Rand), and the characterization is wooden and one-dimensional. And surely, any work of fiction needs more than one hero, and at least one heroine?

No, I recommend that Branden stick to California psychobabble and shrinkage in the future. He says in the book that he found his group intensives efficacious. Somehow omitted is the fact that, efficacious or not, huge groups, each patient paying a hefty sum for the weekend, with Nathan acting as square-dance caller ("Turn to the person on your right. Complete the following sentence: I hate your guts because.…) brought in an enormous amount of moolah.

There is a great line in The Godfather when the Corleone family is considering holding a meeting with someone, and the Don says, "he’s a serious man, worthy of respect." Doctor Branden on the contrary, is a poseur and a mountebank, worthy only of scorn and contempt.

The battle between Rand and Branden, moreover, is really no contest. Rand created something, whereas Branden has lived his entire life parasitically off Rand, first as a worshipful disciple and cult organizer, then as a neo-Randian shrink who set up shop in California with the solid initial base of the RandCult’s Nathaniel Branden Institute mailing list. And now, too, he is parasitically living off Rand as a scavenger and kiss-and-tell calumniator. Talk about your "social metaphysician!"