For my money, the greatest movie ever made is The Third Man, first released 50 years ago and now re-released with restored footage (11 minutes had been cut from the U.S. version). Usually praised as a "classic thriller," it’s much more than that: it’s a study of evil that bears repeated viewings.

Rarely has a film been blessed by such a perfect combination of direction (Carol Reed), script (Graham Greene), cinematography (Robert Krasker), music (Anton Karas), and excellent casting, right down to the creepy minor characters.

An American pulp-fiction writer named Holly Martins (Joseph Cotten) comes to occupied Vienna just after World War II to take a job writing for an old pal’s "medical charity." But upon arrival, he learns that his pal, Harry Lime, has just been run over by his own chauffeur. Holly attends Harry’s funeral and talks to witnesses, whose conflicting accounts of a "third man" at the death scene lead him to believe that Harry was murdered. When a cynical British military policeman, a Major Calloway (Trevor Howard), tells him that Harry was "about the worst racketeer who ever made a dirty living in this city," Holly angrily resolves to find "the third man," solve the murder, and shame Calloway by clearing Harry’s name. 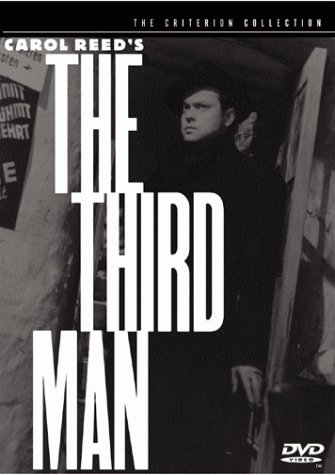 It turns out that "the third man" was Harry himself – still alive and in hiding after faking his own death. Moreover, Calloway was right: Harry is getting rich in the black-market penicillin trade, watering the stuff down and causing death and suffering to the innocent. After falling in love with Harry’s lover, Anna Schmidt (Alida Valli), Holly finds Harry, confronts him, and eventually agrees to help Calloway capture him.

Harry Lime is one of the great villains of film. He’s played by Orson Welles in a brief but unforgettable performance, which is well served by Welles’s hammy style: Harry is a charming rascal who, as Anna says, never grew up. Holly’s old schoolmate, who could fake illnesses and report cards, has developed naturally into a ruthless criminal who will sacrifice anyone, including Anna, to his own profit. In his confrontation with Holly in a ferris wheel, Harry jauntily explains his philosophy. Looking down at the tiny people milling about below, he asks Holly what he’d say if Harry offered him $20,000 – tax-free – "for every one of those dots that stopped moving." "Would you really, old man, tell me to keep my money? Or would you calculate how many of those dots you could afford to spare?"

In a telling analogy, Harry likens himself to governments. "They talk about ‘the people’ and ‘the proletariat.’ I talk about the suckers and the mugs. It’s the same thing. They have their five-year plans, and I have mine." All this is said with a conspiratorial smile; Harry knows how seductive he is, even when proposing murder.

Holly won’t bite. He accuses Harry of throwing Anna to the wolves by allowing the Russians to repatriate her to Czechoslovakia. Harry deflects the charge: "What can I do, old man? I’m dead, aren’t I?"

Anna learns that Harry is alive and that he has betrayed her to the Russians. But she loves him anyway and won’t forgive Holly for helping Calloway trap him. The film ends with a stunning snub: Anna walks coldly past the waiting Holly without even giving him a glance. Even when destroyed, Harry Lime still exerts a sinister power over the living.

There really are people like Harry in this world. He may remind you of a certain politician of similar personality: charming, cunning, ruthless, knowing all the angles, profoundly self-centered and treacherous, yet somehow able to retain the loyalty even of people he has deceived and betrayed.

Evil doesn’t usually appear with horns and cleft hooves. Often it comes with a winning smile, an exaggerated warmth, an offhand joke, and an offer that’s hard to refuse. It may flatter the suckers and the mugs as "the American people," but it regards them as so many dots, to be measured by opinion polls and focus groups, with calculation where its conscience should be. And it gets a lot of help from people who ought to know better.

Previous article by Joseph Sobran: The Culture of Tyranny

Lies, Lies, and More Lies The Culture of Tyranny