The Church of Silence

Unlike most spiritual leaders and moral teachers, Jesus of Nazareth offered no formula for worldly happiness and social order. Just the opposite: he told his disciples to take up their crosses (an image he used well before the Crucifixion) and to expect suffering. He warned them that the world would hate them as it hated him: it was their destiny as Christians.

After the conversion of the Roman world under the Emperor Constantine, a Christian civilization arose and the age of martyrdom seemed to be over. Most Western Christians still think of that period as a thing of the past, a venerable but remote phase of their history.

But the most intense persecution of Christianity occurred not in the Roman Empire, but in the twentieth century, especially in the Communist world. A large part of this story, hidden and ignored, is told in a new book by Robert Royal, The Catholic Martyrs of the Twentieth Century (Crossroad Publishing).

It is hard to tabulate or even estimate the number of Catholics and other Christians murdered by modern tyrannies. The figure certainly runs into the tens of millions, though it isn’t always easy to distinguish between those killed specifically for their religion and those killed for other reasons, ethnic and social. But contrary to recent slanders, the Nazis as well as the Communists regarded the Catholic Church as their mortal enemy. 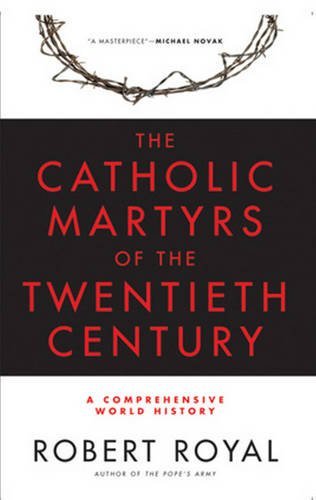 After World War II, Communism’s triumph in Catholic Central Europe – the bitter fruit of the Anglo-American alliance with the Soviet Union – brought ferocious assaults on Catholics. Yet, as Royal observes, surprisingly few renounced their faith even in the face of torture and death.

The measure of these Catholics’ courage is suggested by part of one Jesuit’s summary of the tortures they suffered in Albanian prison camps:

Most of them were beaten on their bare feet with wooden clubs; the fleshy part of the legs and buttocks were cut open, rock salt inserted beneath the skin, and then sewn up again; their feet, placed in boiling water until the flesh fell off, were then rubbed with salt; their Achilles’ tendons were pierced with hot wires. Some were hung by their arms for three days without food; put in ice and icy water until nearly frozen; had electrical wires placed in their ears, nose, mouth, genitals, and anus; burning pine needles placed under fingernails; forced to eat a kilo of salt and having water withheld for 24 hours; boiled eggs put in their armpits; teeth pulled without anaesthetic; tied behind vans and dragged; left in solitary confinement without food or water until almost dead; forced to drink their own urine and eat their own excrement; put in pits of excrement up to their necks; put on a bed of nails and covered with heavy material; put in nail-studded cages which were then rotated rapidly….

As Royal, a Dante scholar, remarks: “The sorrowful litany shows an inventiveness in torture surpassing the punishments that Dante, one of the great human imaginations of all time, displayed in writing his Inferno.” No less horrible than the sheer conception of these torments is the fact that men were found who could be paid to inflict them without fainting.

Why hasn’t all this been told before? It’s not surprising that the liberal Western media should ignore it; what is very surprising is that American Catholics have ignored the plight of their brethren. But prosperous American Catholics are a self-absorbed lot, too obsessed with contraception and women priests to spare much thought for those who are far worse off.

The Culture of Tyranny The Devil State