The Myth that Is FDR

American Affairs, 1949. An MP3 audio file of this article, read by Floy Lilley, is available for download.

When John T. Flynn has put the Roosevelt myth through his terrible wringer and thrown aside the empty sack, all that remains of it is – the myth. His book will not be challenged on grounds of fact. He has a special way with facts. He brings them together in piles like fissionable material, and then suddenly a pile explodes with atomic effect, even though there had been nothing new in the facts. Many of them you already knew and had forgotten. But the secret of a myth is no more explained by facts than the secret of life is explained by anatomy. It may be that for good or bad the man of myth is an instrument, and if that is so, he would be unable to account for himself, or, trying to give reasons, would give wrong or puerile reasons, not knowing any better.

You get this idea as you read Flynn’s history of the thirteen Roosevelt years. From backstage, the New Deal was an incredible confusion, unable, as Mr. Flynn thinks, to make sense even to itself; and the man least competent to make sense of it was the president. He was the juggler who made fascinating patterns in the air with glittering objects handed out to him from behind the scenes by visionaries, monomaniacs of economic theory, social reformers who found themselves suddenly in the land of a dream come true, disaffected intellectuals, sinister aliens, petted communists, and crackpots; Henry Wallace, under whose evangel of abundance cotton was plowed under and little pigs were slaughtered; Milo Perkins, who wanted a world he could lift and whose slogan was "Grab the Torch," and Dr. Maurice Parmalee, who

had spent years drinking deep of the "new learning" in Europe and wrote a book called "Farewell to Poverty." Wallace and Perkins and Parmalee made a marvelous trio of musketeers as they figuratively strutted over this hemisphere arm-in-arm singing "Hello Plenty! Here We Come!" Parmalee wrote another book labeled Bolshevism, Fascism and the Liberal Democratic State. In this he said: "The high technological development in the United States renders it feasible to introduce a planned social economy much more rapidly than has been the case in the U.S.S.R. …. The superficial paraphernalia of capitalism can be dispensed with more quickly than in the Soviet Union." But the Doctor had strayed into much lighter fields of literature. He had also written a book called Nudism in Modern Life which is secluded in the obscene section of the Library of Congress.

They were willing to try anything, and did try everything they could think of, but nothing really worked. After five years, the bad-wolf depression was back again, deficit spending was no longer a magic solution because, for one reason, nobody could think of anything big enough to spend money for, and the New Deal was on the rocks. On January 1, 1938, says Flynn, the president and Henry Morgenthau

sat down to a sad repast. Roosevelt told him "the next two years don’t count – they are already water over the dam." Then he revealed the extent of his plans – they would have to step up spending, forget about balancing the budget and get along with a two or three billion dollar a year deficit for two years. Then a conservative would come into office. That administration would do what Roosevelt had been promising he would do – quit government spending. And then the whole thing would go down in a big crash. At that point they would have to yell for Roosevelt and Morgenthau to come back and get them out of the hole. The amazing feature of this strange confidence, which Morgenthau has reported, is this: Roosevelt and Morgenthau were already in a hole – the kind of hole the next administration would be in. Nobody had to call them in now – they were in. And they had not the foggiest idea what to do about getting out of the hole they were in, except to spend. Morgenthau concluded from this that Roosevelt had put out of his mind any thought of a third term. It is possible that he had. 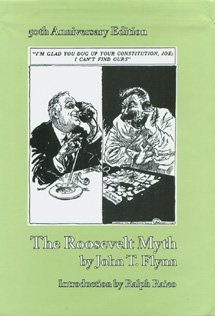 What saved the New Deal from confession of failure was first the defense program and then the war. There was then something big enough to absorb astronomical deficit spending. The attitude of the New Deal economists toward the defense program was upside down. Their question was not "How much will it cost to create an adequate national defense?" The question they asked themselves was "What expenditure for national defense will increase the national income to $100 billions?" It was, therefore, inflation of the national income they were thinking of – not how to buy a maximum of defense at a minimum of cost.

But many of those who lived through the early years of the New Deal, especially the period known as "the one hundred days," without surrendering control of their rational faculties, will feel that Mr. Flynn leaves something out, and that what is missing from his history is the key. To this Mr. Flynn would undoubtedly say yes, and then explain that the key, it was a fact, could not be documented. Even those who believe there was a key were never sure that Mr. Roosevelt was aware of its existence.

From the facts alone, as Mr. Flynn relates them, you might suppose that everything just happened; that when Mr. Roosevelt was elected he had no idea what he was going to do, never thought through any of the things he did do, and that the story of the New Deal made itself up as it went along. Events of revolutionary meaning took place, but they were happy and reckless inventions, launched in a spirit of experimental adventure, with no preconceived design and no thread of purpose at all.

Mr. Flynn says, for example, and it is undoubtedly true, that Mr. Roosevelt’s understanding of economics was immature and that monetary questions confused and bored him. Everyone knew that. Nevertheless a study of the New Deal’s monetary measures may lead one to a startling conclusion. That conclusion may be stated as follows: if there had been a definite revolutionary purpose and if the way of bringing that purpose to pass had been thought out beforehand with extreme intelligence, everything would have happened just as it did.

Try putting down first the conditions. The country was on a gold standard, banking was free, exchange was free, every man was free to do what he pleased with his gold to hoard it or to sell it or to take it out of the country. All the gates stood open.

Then imagine the problem to be this: under these conditions given, how are you going to get control of all money, banking, and credit, in order not only to get your hands on the public purse, but to be able to use inflation as an instrument of social or revolutionary policy?

Garet Garrett (1878–1954) was an American journalist and author who was noted for his critiques of the New Deal and US involvement in the Second World War.

The Best of Garet Garrett